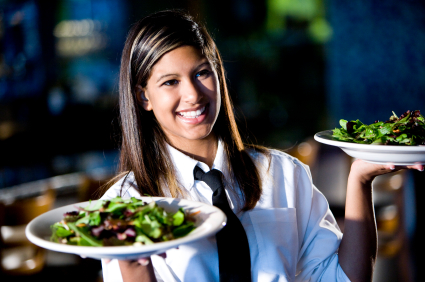 Tipping the Scales of Inequality

Stagnating wages for tipped workers is part of a bigger story of rising inequality in America.
By Marjorie E. Wood | February 5, 2014

At a pancake house in Houston, Claudia spent two hours rolling silverware into napkins on a slow weekend night. Without any tables to serve, she wasn’t tipped to supplement her $2.13 hourly wage. Like many other restaurant employers, Claudia’s boss did not make up for her shortfall in tips despite the legal obligation to do so.

Claudia’s story, reported in the book Behind the Kitchen Door by Saru Jayaraman, speaks for millions who struggle to make ends meet on a tipped minimum wage of $2.13.

Despite record profits reaching upwards of $660 billion in 2013 and projected to go higher in 2014, the restaurant industry has fiercely opposed raising the wage. Though the tipped base wage used to rise along with the minimum wage, it has been frozen in place at $2.13 since 1991.

The decoupling of the tipped wage from raises in the minimum wage did not happen by accident. A powerful and organized lobby in Washington — the National Restaurant Association — has worked diligently to ensure that servers like Claudia continue receiving $2.13.

Known as “the other NRA,” this restaurant lobby successfully pressured lawmakers in 1996 to separate President Bill Clinton’s minimum wage increase from the tipped minimum wage, keeping it at $2.13. At the time, no one predicted that $2.13 figure would become permanent.

That most Americans still never question the $2.13 wage is testament to the NRA’s influence.

The consequences of this stagnation have been dire for restaurant workers. Tipped workers are nearly three times as likely to fall into poverty and twice as likely to be on food stamps as the general population. Women are disproportionately affected since more than 70 percent of restaurant servers are female.

Stagnating wages for tipped workers is also part of a bigger story of rising inequality in America. Even when restaurant industry profits and CEO pay have skyrocketed, restaurant workers haven’t shared this growing wealth. The NRA’s influence as a corporate lobby signals how the wealthy have organized to an unprecedented degree to promote their interests. Meanwhile, workers’ influence has waned with the decline of organized labor.

But change is on the way. Since 2008, thousands of restaurant workers have joined Restaurant Opportunities Center United (ROC), which fights to improve wages and conditions for the nation’s restaurant workforce. Since its founding, ROC has brought more than 10,000 restaurant workers on board and expanded to 26 states.

The NRA is paying attention. The industry group has joined forces with Richard Berman, a lobbyist notorious for his take-no-prisoners approach, to help the restaurant industry discredit ROC. Known for pioneering corporate smear tactics to attack public-interest causes, Berman has launched a website to vilify ROC and its work.

ROC is organizing a National Day of Action on February 13 to raise awareness of the $2.13 tipped minimum wage. All Americans should unite behind the nation’s restaurant workers on this day.

Even if you can’t take part in a rally near you, tell your representatives in Congress to support raising the minimum wage, including for tipped workers.

Marjorie Elizabeth Wood is an economic policy associate at the Institute for Policy Studies and the Managing Editor of Inequality.org. IPS-dc.org