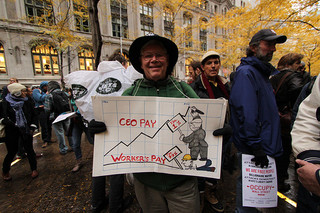 The most important executive compensation indicator is the gap between what CEOs and their workers are paid.
By Sam Pizzigati | April 24, 2013

Under current U.S. law, all our publicly traded corporations must annually disclose exactly what they pay their top executives. So why do all those CEO pay scorecards we see every spring show such different results?

What explains all these wildly divergent results? Let’s start with how corporations pay their top execs. This can get tricky.

Most executive pay today comes as stock-related compensation. Stock “options” give executives the right, down the road, to buy shares of their company stock at today’s share price. If that share price jumps, the execs can buy low and sell high. Instant windfall.

“Restricted” stock awards, on the other hand, give executives actual shares of stock, not just an option to buy them. Execs do have to wait a few years before they can actually claim these shares. No big deal. The shares will still have value in future years even if a company’s stock takes a hit.

But how should we value all this share-related compensation right now? Should CEO pay scorekeepers estimate how much stock awards granted this year will be worth in years to come? Or should scorekeepers only tally stock-related awards when execs actually profit personally from them?

Given all this, do we have any single stat that tells us what we need to know? We do. That stat: the divide between worker and top executive pay.

America’s big-time CEOs, labor researchers at the AFL-CIO report, are now making 354 times the pay of average U.S. workers, the “largest pay gap in the world.”

The overall trend line, in other words, couldn’t be clearer. How can we reverse it? Identifying the specific pay gap between individual CEOs and their own workers would be a good first step.

Corporations have had to publish, for decades now, how much they pay their top execs. They haven’t had to reveal publicly how much — or how little — they pay their workers. The Dodd-Frank Wall Street Reform and Consumer Protection Act enacted in 2010 changes this dynamic, at least on paper.

Dodd-Frank requires corporations to annually disclose the gap between what they pay their CEOs and their most typical workers. But a corporate lobbying blitz has kept the Securities and Exchange Commission from writing the regulations needed to enforce this disclosure mandate.

Why do our biggest corporations so fervently oppose disclosing their CEO-worker pay ratios? Disclosure by itself, after all, won’t shove down CEO pay levels. But disclosure could open the door to other steps that could curb CEO pay excess.

Lawmakers could, for instance, choose to deny government contracts or tax breaks to corporations that pay their top executives over 25 or even 50 times what their own workers are making.

Far-fetched? Current law already denies government contracts to companies that discriminate by race or gender in their employment practices. As a society, we’ve concluded that our tax dollars must not go to corporations that widen racial or gender inequality.

So why should we let our tax dollars enrich corporations that widen our economic divide?

OtherWords columnist Sam Pizzigati is an Institute for Policy Studies associate fellow and a co-author of the Institute’s 2012 Executive Excess report. His latest book is The Rich Don’t Always Win: The Forgotten Triumph over Plutocracy that Created the American Middle Class. OtherWords.org