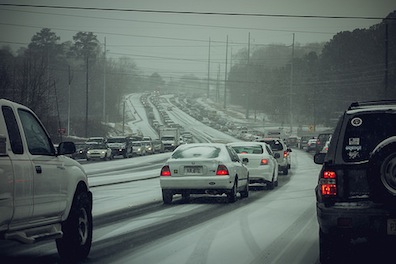 It's time to thaw out the nation's deep freeze on transportation policy.
By Isaiah J. Poole | February 12, 2014

Communities around the country can learn a sobering lesson from the day Atlanta literally froze up. How Congress handles one of its biggest spending decisions will indicate whether our leaders got the message.

Atlanta found itself scrambling in mid-February to avoid a repeat of the debacle that came only two weeks earlier. On Jan. 28, apocalyptic scenes of gridlock resulted from just two inches of snow and ice. Roughly a million commuters, including children on school buses, stuck on roads for up to 20 hours.

This time, state and local officials took steps to keep people off the roads so they can be cleared and treated. But this is about more than making sure that the one of the nation’s ten biggest metropolitan areas can handle freak snowstorms.

As Rebecca Burns, an Atlanta journalism professor and magazine editor, wrote in Politico after the snowstorm, what happened in Atlanta “underscores the horrible history of suburban sprawl in the United States and the bad political decisions that drive it.”

The freeze-up of Atlanta, as Burns put it, was “manmade from start to finish.”

But it’s not just the risk of an Atlanta-style fiasco that should concern the millions of people who live in other car-dependent communities. It’s also the toll of their day-to-day experience. The Texas A&M Transportation Institute says that the fuel, time, and productivity we lose due to congestion cost the economy $121 billion in 2011, or an average of $818 per commuter. We waste on average 2.9 billion gallons of fuel a year stuck in traffic, or about half the oil we import in an average month.

There’s bipartisan agreement in Washington that we need to do much more to improve our transportation grid. But the last time Congress tackled a federal transportation funding bill — an exercise Congress is supposed to do every five or six years so that states and municipalities can plan and execute multi-year construction projects — the best members could agree on is a two-year plan that will only carry the nation through the end of September.

This time, Congress faces a Congressional Budget Office report of a $100 billion shortfall by 2020 in the amount of federal money available just to maintain the status quo. That’s because our main source of federal money for roads, bridges and public transit is a gasoline tax that hasn’t increased since the 1990s. Not only has inflation eroded the purchasing power of gasoline tax receipts, but gains in fuel efficiency means we’re buying less gas per mile.

In his State of the Union address, President Barack Obama suggested as an interim step using money gained from corporate tax changes to fund transportation projects. One popular bill based on this approach would rely on coaxing multinational corporations to buy infrastructure bonds with money they have parked overseas to avoid taxation. But that’s an approach Citizens for Tax Justice derided as rewarding big corporations for their tax evasion and The Tax Policy Center pooh-poohed as a “shell game.” In any event, commuters can’t wait for Washington to muster the strength to end the games corporations and the wealthy play with the tax code.

We’re at the intersection of two immediate crises: a commuting nightmare for those who work and a jobs crisis for those who can’t find work.

That’s why we urgently need a well-funded and forward-thinking transportation plan that gives people better roads, more mass transportation options, encourages development that doesn’t repeat the sprawl mistakes of the past, and puts millions of our unemployed back to work solving these problems.

It’s not popular to talk about raising a gasoline tax or coming up with some other ways to cover the cost — such as a mileage tax or a wholesale energy tax. But that’s where leadership comes in, to help us work through the choices.

The alternatives would leave us frozen in place.