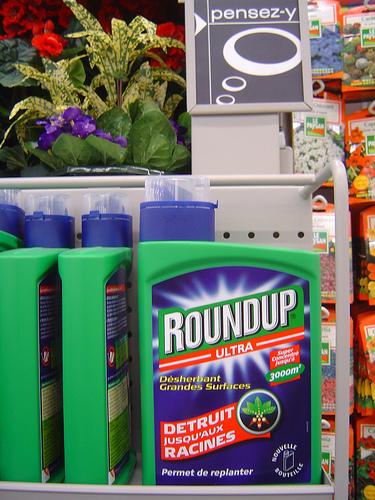 New varieties of GMOs come with instructions to douse the earth with toxic herbicides.
By Jill Richardson | September 6, 2017

For many years, genetically engineered crops were said to be environmentally responsible.

Those crops have genes from different species implanted in them, giving them traits they normally wouldn’t have. Companies like Monsanto that produced such strains claimed they were good for the planet.

One genetically engineered crop variety is specifically designed to withstand exposure to Monsanto’s herbicide Roundup, which Monsanto claimed broke down quickly in the soil.

With these “Roundup Ready” crops, farmers can spray their entire fields with Roundup, trusting that their crops will live and the weeds will die.

Monsanto said it was safe. Why? Because Roundup was safe.

Some contest the claim that Roundup is actually safe. California lists it as a carcinogen, so maybe it isn’t.

Another Monsanto product, Xtend, uses a different herbicide — dicamba — that inspires no such debate. It’s bad for you.

A new form of genetically engineered crops — soybeans that can survive exposure to dicamba — means an increase of the use of dicamba. To rid a field of weeds, a farmer douses it in the herbicide. Only the soybeans live, while the weeds die.

Yet dicamba is a reproductive toxin. And now it’s going to cover crops that will be sold as food.

This is the first year farmers planted genetically engineered seeds that are made to use with dicamba. Over and above the potential harm to human health, though, dicamba is already causing trouble.

The toxic herbicide is drifting into other fields and killing other farmers’ crops, along with native plants that haven’t been modified to withstand the toxins.

This year, the dicamba-tolerant soybeans were planted on 20 million acres, the Washington Post reports. The dicamba sprayed on them damaged or killed crops on another 3.1 million acres.

For every 6.5 acres planted in dicamba-tolerant soybeans, then, another acre of crops died.

Maybe soybeans designed to survive dicamba will lose favor with farmers because of the herbicide’s tendency to kill other crops. But they’re just one of many new genetically engineered crops created to withstand one herbicide or another.

Among them is another variety of soybeans that farmers are instructed to spray with a carcinogenic herbicide called Balance. (Great name for something that causes cancer, huh?) Again, the crop lives and the weeds die. Also, the herbicide can leach into the groundwater.

Once upon a time, biotech companies selling genetically engineered crops had a fig leaf of cover to claim their products were absolutely non-toxic. Today, we have nothing but the naked truth. The new varieties come with instructions to shower them in toxic herbicides.

How on earth can that be good in any way?