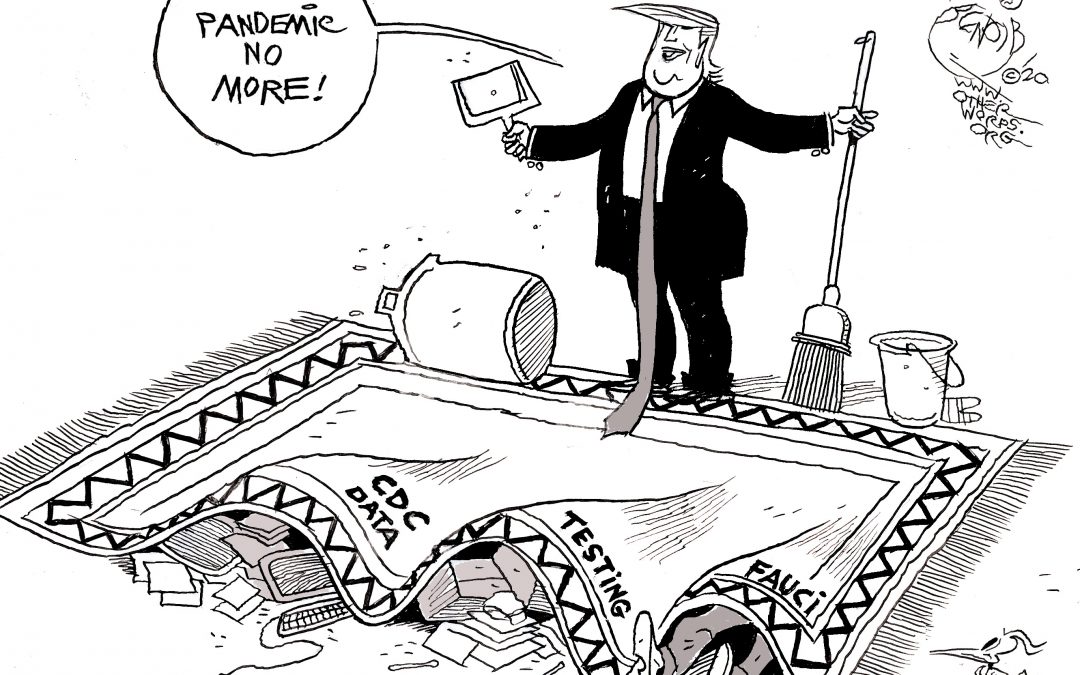 Trump’s Authoritarianism is Ill-Suited to a Pandemic

The Trump administration is apparently undertaking its latest effort to make 2020 more of a Kafkaesque nightmare than it already is. Yes, we’ve got murder hornets and a swarm of flying ants that can be seen from space over in Ireland, but maybe the scariest plague of the year is the president.

Since the start of the pandemic, Trump’s only concern has been his poll numbers. He wants to go back to the reality we left behind in 2019: an open economy and no mass casualties from a novel virus.

We can’t do that, so he’s done his best to pretend: downplaying the pandemic, falsely claiming his administration has it under control, urging a quick economic reopening, and inaccurately claiming the economy is strong anyway.

When he can’t pretend everything is fine, he blames the Chinese. But China is not responsible for Trump’s botched response to the pandemic.

Now the Trump administration is actively interfering with the pandemic response.

Hospitals have been instructed to send COVID data to a central database in Washington, bypassing the Centers for Disease Control (CDC). The information will no longer be accessible to the public, raising concern that the data is being hidden for political reasons and the lack of transparency will make it easier for the administration to mislead the public.

The administration is also blocking CDC director Dr. Robert Redfield from testifying before Congress about the safety of reopening schools. They are attempting to block GOP senators from allocating billions of dollars to the CDC, Pentagon, and State Department for pandemic response. And the administration even opposes sending billions to states for testing and contact tracing.

Trump’s message to states has largely been “you’re on your own,” declining a national leadership role and placing responsibility for handling the pandemic on the states. He’s also suggested that governors should “treat him well” to receive federal aid, using the pandemic as a bargaining chip to silence dissent from governors who disagree with him.

Earlier in the pandemic, when personal protective equipment (PPE) supplies were limited, the federal government was even seizing PPE shipments.

In normal times, I would say the president should not be abdicating his leadership responsibility on the pandemic response. Under this president, I think we’re all better off if he and his political appointees interfere as little as possible and let more capable people do their jobs.

Despite his recent conversion to mask wearing, Trump’s authoritarianism is ill-suited to a pandemic. You cannot lower mortality rates by claiming the pandemic is under control and trying to force schools and businesses to reopen, regardless of the risk to workers. You can’t prevent the economy from tanking by insisting that it’s fine.

Trump’s top concern appears to be his own approval ratings, not our national welfare. He seems to believe his denial will be enough to save the economy — a plan that will fail and cause further mass casualties along the way.

The administration has created a terrible situation. All of our choices between our health and our economy are tough, and no choices will fully protect us. More than 140,000 people have died, and our economy is a mess.

We need to govern with facts instead of fantasy. If Trump can’t handle the job, he should get out of the way.