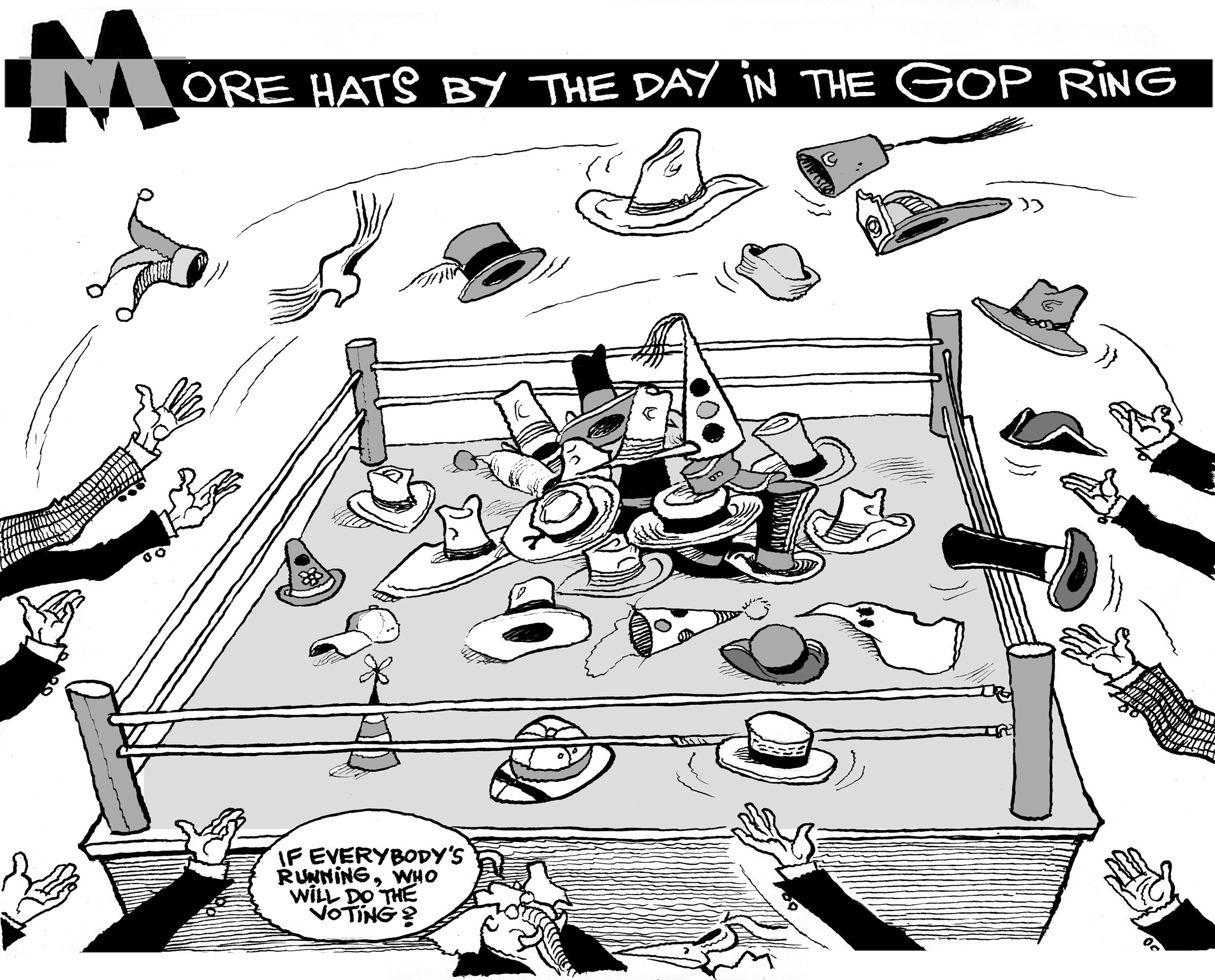 More Hats in the Ring, an OtherWords cartoon by Khalil Bendib

The presidential candidate’s rants have galvanized Latinos of all ages, backgrounds, and political affiliations.
By Raul A. Reyes | July 15, 2015

The chips just keep falling. The Professional Golf Association is one of the latest companies to part ways with Donald Trump. The PGA announced that it would not hold its Grand Slam of Golf at a Trump golf course in Los Angeles, because of the business mogul’s recent remarks about Mexicans and immigrants.

Other companies that have dumped or distanced themselves from Trump since he treated throwing his hairpiece in the ring as a reality TV episode include Macy’s, NBCUniversal, Univision, NASCAR, ESPN, Farouk Haircare Systems, and Serta Mattress. 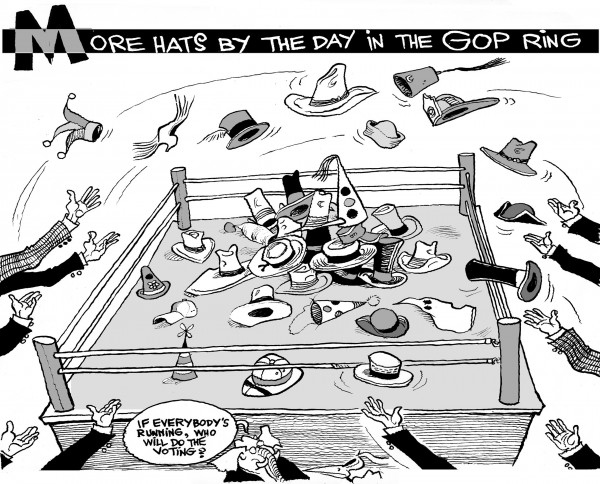 More Hats in the Ring, an OtherWords cartoon by Khalil Bendib

The list of celebrities is as long or longer and includes chefs José Andrés and Geoffrey Zakarian, Dancing with the Stars’ Cheryl Burke and MSNBC’s Thomas Roberts. Burke and Roberts were slated to co-host Trump’s Miss USA pageant but quit in protest.

When Trump’s compared Mexican immigrants to drug dealers, criminals, and “rapists” during the launch of his presidential campaign, he brought on a refreshing moment of unity for Latinos. We stood up against hate speech with unprecedented results. We learned who are our friends are — and who they aren’t.

“When Mexico sends its people, they’re sending people that have lots of problems,” Trump said during his unorthodox stump speech. “They’re bringing drugs. They’re bringing crime. They’re rapists.” He was wrong as well as offensive.

As an immigration lawyer, I often find myself explaining that being here in this country without authorization is a civil offense, not a crime. The overwhelming majority of undocumented immigrants are in fact working hard and leading productive lives.

A study by the Immigration Policy Center found when undocumented immigration to the U.S. rose during the 1990s, our crime rate actually fell. Border cities, such as El Paso and San Diego, are some of the safest cities in the nation, and illegal border crossings are at a 40-year low.

In other words, Trump should stick to real estate, because he is no immigration expert.

He did do a masterful job of galvanizing Latinos of all ages, backgrounds, and political affiliations. We united to demand that networks and sponsors “Dump Trump” — and it worked. Everyone from actress America Ferrera to Fox News Latino’s Rick Sanchez has celebrated our collective stand against hate speech.

Yet the response from some of our aspiring leaders has been disappointing. Senator Ted Cruz, a Cuban-American candidate for the Republican presidential nomination, said he thinks Donald Trump is “terrific” and “speaks the truth.” Another GOP 2016 hopeful, Rick Santorum, said that Trump “focused on a very important issue for American workers, and particularly legal immigrants in this country.”

The Republican Party generally missed opportunity to make some positive headlines. Lacking the courage to denounce The Donald’s remarks, the GOP squandered a moment to show some political backbone and cultivate Latino voters.

Nearly two weeks after Trump’s comments, frontrunner Jeb Bush finally weighed in. “I don’t agree with him. I think he’s wrong,” he said. “It’s pretty simple.” Coming from a man who is married to a Mexican immigrant and has Mexican-American children, these words seem awfully weak.

Marco Rubio, another Cuban-American candidate, has been slow to weigh-in on Trump’s remarks too. While he did eventually call them “inaccurate” and “offensive,” the Florida senator took too long. Entertainers like Ricky Martin and Shakira denounced Trump weeks earlier. Calling out bigotry should be a no-brainer.

Sure, Trump may not prove to be a serious contender. But it is shameful that the GOP’s 2016 bench can’t bring itself to wholeheartedly condemn his vitriol.

Trump is leading or doing well in several national and early state polls. That’s why the other candidates and all Republican leaders should be denouncing his ignorance and xenophobia more forcefully. Their low volume shows that all the GOP talk about becoming a more inclusive party, and welcoming Latinos, may have been just that: Talk.

Trump clearly doesn’t respect Hispanic voters or immigrants. Sadly, it looks like the GOP doesn’t either.

Raul A. Reyes is an attorney and columnist based in New York City.
Distributed via OtherWords.org.