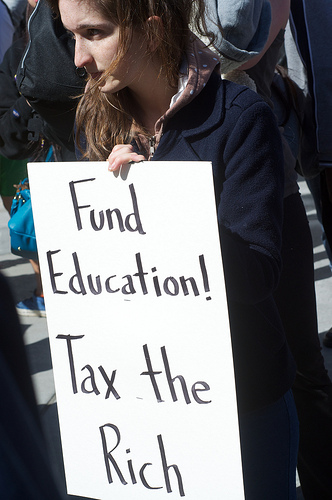 You might not have noticed it yet, but student protests are undergoing something of a renaissance. They’re rising to levels unseen in decades.

In California, students are stripping half naked to oppose tuition hikes and shutting down highways to draw attention to crushing student debt. In Wisconsin, they’re rising up to resist massive cuts to education proposed by Governor Scott Walker.

And on Capitol Hill last month, 300 college students from across the country rallied to demand that Congress cancel a proposed $150-billion cut to student aid in the recently passed Republican budget.

The action was organized by the United States Student Association, the nation’s oldest, largest, and most diverse student-led group. They’ve been demanding free and universal access to higher education since their founding in 1947 — and the idea is catching on again.

“We need a revolution in the way that the United States funds higher education,” said Senator Bernie Sanders, a Vermont independent who spoke at the rally. “You are leading that revolution.”

Yet the idea that students should be able to attend college in this country without taking on mountainous levels of debt or bankrupting their families is far from revolutionary.

It wasn’t that long ago that Senator Claiborne Pell, the namesake of Pell grants, was calling for subsidies to cover the full cost of college for all students. Or when over 2 million Americans earned a free degree as a result of the GI Bill after World War II.

Now, total student debt tops $1 trillion, and the average 2014 graduate left college indebted over $30,000. “If we really want to promote more equal opportunity,” famed Capital in the Twenty-First Century author Thomas Piketty recently pointed out, “we should do something about student debt.”

The cost of covering tuition for all students at public colleges and universities nationwide is surprisingly low.

If the government cut subsidies to the predatory and often nefarious for-profit college industry and re-arranged the current labyrinth of education spending, the bill would total just $15 billion per year.

That’s less than what the federal estate tax, a levy on the wealth multimillionaires leave to their heirs, raises. A more robust estate tax, like we had before the second Bush administration, could easily cover the cost of free and universal higher education. It would also rein in or roll back the rising concentration of wealth.

Fortunately, supporters of universal education don’t have to wait for Congress. The same mechanism can work — and has worked — at the state level.

Washington State, for example, instituted a state estate tax in 2005 and used the revenue to fund education. When the tax came under attack at the ballot a year later, over 60 percent voted to keep both the funding and the estate tax that made it possible.

While governors and lawmakers call for cuts to education, students are plotting a different future. Their demands are legitimate, and the means to achieve them are well within reach.

OtherWords columnist Josh Hoxie is the director of the Project on Opportunity and Taxation at the Institute for Policy Studies. OtherWords.org.