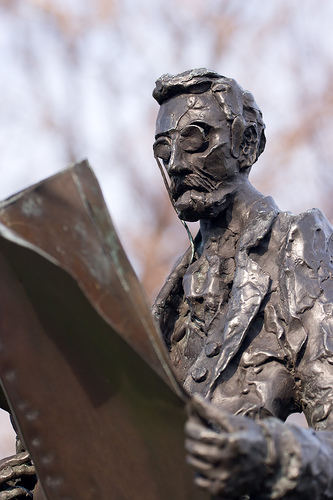 Turning Journalism into a Joke

Obama's serious comments about the value of journalism stand out as the Koch brothers consider buying the Los Angeles Times.
By Jason Salzman | May 8, 2013

If you hear someone talking about journalism these days, they’re usually complaining about how the industry is collapsing. Or how terribly biased the media is, one way or the other.

But every time the annual White House Correspondents Dinner rolls around, the word “journalist” suddenly brims with caché.

It’s a popular event, not because journalists are “in,” but because the jokes delivered at the pompous springtime event are great.

This year, for example, President Barack Obama began his speech at the soirée with this joke:

“These days, I look in the mirror, and I’m not the strapping young Muslim Socialist I used to be,” the President said.

Get it? That’s definitely funny, as were many of the other remarks. This year’s dinner was headlined by comedian and talk show host Conan O’Brien and packed with political and Hollywood celebrities.

Do you know what’s not funny? That journalism is in such dire straits.

Weakened by a 50 percent decline in advertising revenue over the past five years, and with a third fewer newsroom employees than 12 years ago, newspapers across the country are going in and out of bankruptcy. They’re looking like bargains to venture capitalists and, worse, partisan operatives.

Even America’s leading newspapers are threatened. The best example of that: widespread reports that Koch Industries may buy the cash-strapped Tribune Company’s newspapers, including the Los Angeles Times and the Chicago Tribune.

It makes little sense that a $115 billion energy and manufacturing behemoth that’s the nation’s leading plywood manufacturer, the maker of Dixie Cups, Stainmaster carpet, and other products too numerous to list here would want to enter the unprofitable newspaper business.

But David and Charles Koch, the chief owners of this privately held business empire, are major backers of tea party and libertarian causes and organizations across the country. So it’s hard to believe that the Kochs see this set of bargain-priced newspapers, which includes the Chicago Tribune, Orlando Sentinel, Hartford Courant, and Baltimore Sun, as anything other than another weapon in their robust political arsenal.

What a lousy deal this would be for the rest of us if these notoriously shady billionaires, with no experience in journalism, wind up exerting their control over the reporters who produce the information that’s the lifeblood of democracy.Aside from his jokes at the White House Correspondents Dinner, Obama spoke seriously about journalism. Maybe his comments were too serious to break through the evening’s overwhelming focus on glamour and humor, but here’s what he said about the media’s role following the Boston Marathon bombing: 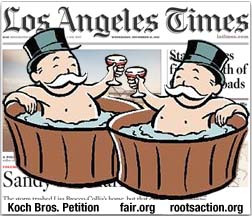 “We also saw journalists at their best, especially those who took the time to wade upstream through the torrent to chase down leads and verify facts, and painstakingly put the pieces together to inform and to educate and to tell stories that demanded to be told,” Obama said. “If anyone wonders, for example, whether newspapers are a thing of the past, all you needed to do was to pick up or log on to papers like the Boston Globe. When their communities and the wider world needed them most, they were there making sense of events that might at first blush seem beyond our comprehension. And that’s what great journalism is and that’s what great journalists do.”

If the Kochs do acquire Tribune Media’s newspapers, let’s hope that they don’t turn the Los Angeles Times and the rest of the chain into a joke.