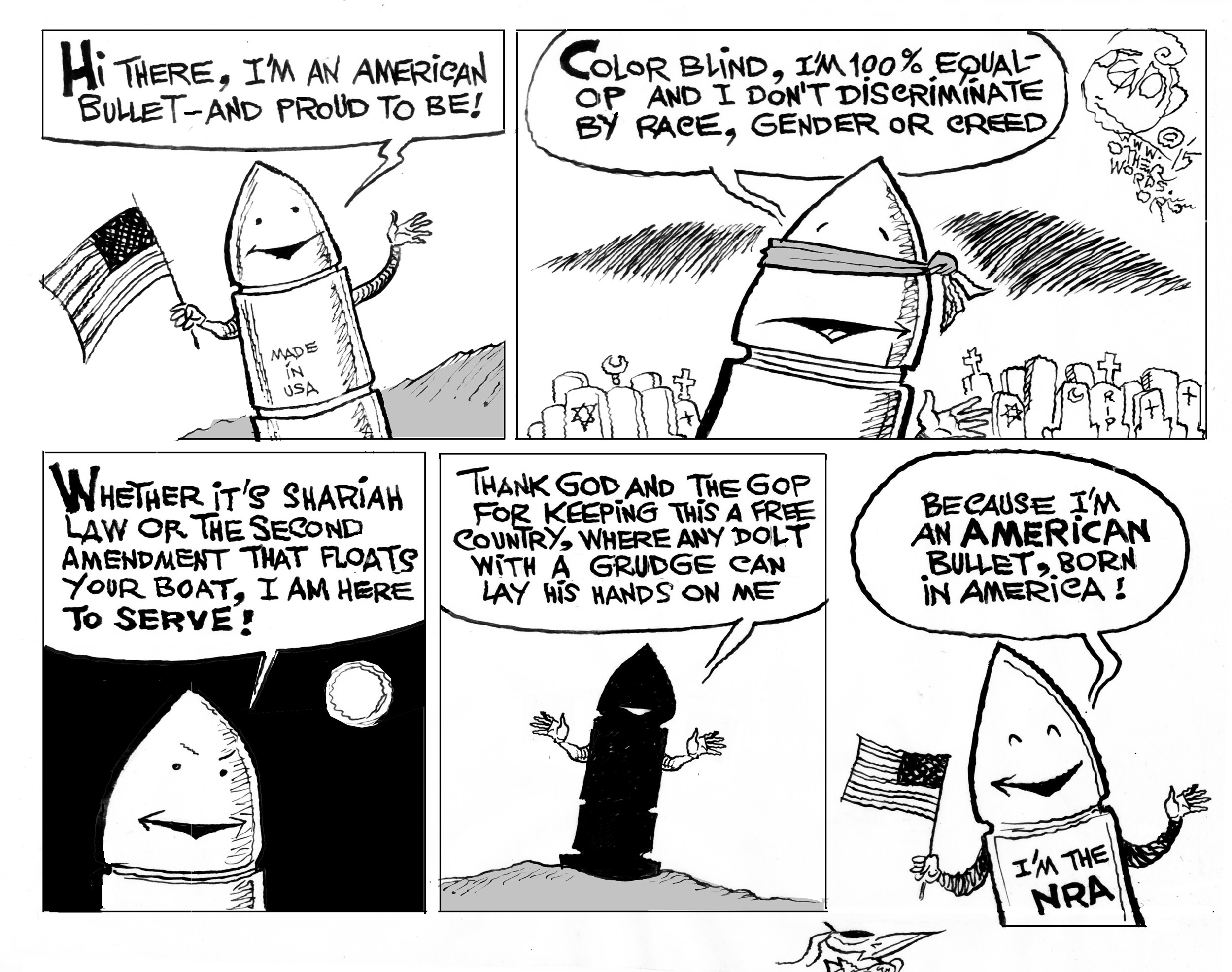 Turning the USA into the OK Corral

The only winner after the San Bernardino shootout is the Second Amendment.
By Donald Kaul | December 9, 2015

People say this is a do-nothing Congress. That’s unfair.

Why, the sirens in San Bernardino had hardly gone silent before lawmakers were clamoring about a bill that might address the confluence of mental health problems and potential gun buyers.

And if that draconian proposal weren’t enough, Republican leaders said they would be forming a committee to study the mass shooting. What profiles in courage.

There were other proposals too — most of them involving doing something unpleasant to Muslims.

One thing not proposed, at least not by Republicans, was any form of gun control. Some Democrats suggested that, as a starter, the government could ban people on the terror watch list from buying enough guns and bullets to turn an armored car into steel wool in 30 seconds flat. 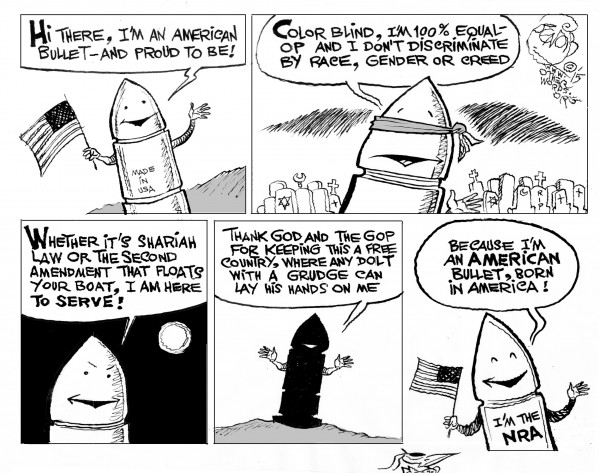 No dice, said the Republicans. That list isn’t perfect, they apparently realize. People get on there by mistake. And what if one of those innocents was denied the right to buy an assault rifle — and that person subsequently found himself confronted by an angry, armed mob? He or she would have no way of defending himself. Or herself.

I’m not making this up, by the way. This is a real argument.

Anyway, the proposal, despite broad support from Democratic lawmakers, never saw the light of day. Another win for the Second Amendment.

More Americans have died of gunshot wounds in the last four years than died in our wars in Korea, Vietnam, Afghanistan, and Iraq combined. And every 16 minutes, we add to the total.

As for Muslims being the main culprits: Since the 9/11 attacks, 45 people have been killed in what might be called Islamist terrorist attacks in this country. During that same period, 48 people have died at the hands of white extremists, many of them Christians. All of which is a drop in the bucket when it comes to the number of murders during the same 14-year period — 200,000.

For the Republican presidential candidates, the San Bernardino tragedy became an instant opportunity  to whip up hysteria among the faithful.

“The nation is under siege,” said New Jersey governor Chris Christie at an Iowa café. “What I believe we’re facing is the next world war.” Cruz, Rubio, and even Jeb Bush chimed in with their version of “The Muslims are coming, the Muslims are coming.”

But Donald Trump is lording over this hall of infamy. Even before The Donald called for barring all Muslims from entering the United States, he claimed, among other things, that on 9/11 he “watched in Jersey City, N.J., where thousands and thousands of people were cheering as that building was coming down.”

Actually, they weren’t. John J. Farmer, New Jersey’s attorney general at the time of the attacks, investigated the rumor and found it a vile falsehood.

You know, it’s time to stop treating Trump merely as an entertaining buffoon who spices up the otherwise dull Republican debates. And we should call him what he is: a nasty piece of work and a lying ignoramus who’s bullied his way to the front of the Republican line by being unconscionably rude.

He’s mocked the appearance of opponents, made fun of a reporter’s congenital disability, and condoned the “roughing up” of protestors at his rallies.

And yet he’s rising in the polls, just like the sale of guns across the nation keeps spiraling upward.

President Barack Obama addressed the nation the other night seeking to add a note of reason to the climate of hysteria. It was a good speech. There was nothing wrong with it, but I fear it was too little, too late.

Americans, apparently, don’t want to be calmed by assurances that we’re winning a war that we’ve been slow to acknowledge.We want somebody up there pounding the podium promising to do something fierce. We want Winston Churchill.

Barack Obama, alas, is no Winston Churchill. But neither is he Donald Trump. For that let us be grateful.