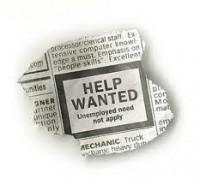 Millions of jobless Americans can't get work precisely because they're out of work.
By David Elliot | September 19, 2011

Across the country, in every region and at companies large and small, unemployed people are being told they are ineligible to apply for vacancies.

Everyone knows that it’s illegal to discriminate in hiring when it comes to factors like race, gender, disability status, and, in some jurisdictions, sexual orientation. But another form of bias — openly discriminating against people who are unemployed — is perfectly legal. In a country where nearly 12 million people are jobless and another 14 million are underemployed, such discrimination is downright perverse.

That such discrimination exists wasn’t common knowledge until a study came out earlier this year showing how widespread it is. The National Employment Law Project (NELP) found that employers of all sizes explicitly refuse to consider hiring the unemployed — simply because they aren’t working.

The NELP study reviewed job postings that appeared on four of the nation’s most prominent online job listing websites: CareerBuilder.com, Monster.com, Indeed.com, and Craigslist. It identified more than 150 ads that openly discriminated based on employment status. The overwhelming majority of the discriminatory ads required that applicants “must be currently employed.”

In today’s America, home to a shattered middle class and millions of homeowners in danger of foreclosure, there are many faces of the unemployed. There are millions of people whose unemployment benefits have expired — or will run out at the end of the year. There are millions whose jobs have been shipped overseas and aren’t coming back. And now there are jobless Americans who can’t get work precisely because they’re out of work.

In response to NELP’s findings, USAction, later joined by Change.org, CREDO Action, and ColorofChange.org, launched an online petition drive to demand an end to the discrimination. Nearly a quarter of a million Americans have signed the petition.

And people are listening.

Indeed.com announced in September that it will no longer post ads that discriminate against the unemployed. President Barack Obama included a provision to ban this kind of hiring discrimination in the jobs package he sent to Congress. And legislation is pending in both the House and the Senate that would make it illegal to refuse to consider hiring the jobless.

Of course, even if the practice of employment discrimination ended today, we still wouldn’t have enough jobs in our country for those who need them. The government should also extend federal unemployment insurance beyond 2011 and pass robust jobs legislation like Rep. Jan Schakowsky’s Emergency Jobs to Restore the American Dream Act. The Illinois Democrat’s bill would create two million public-sector jobs over the next two years.

It’s time to put America back to work. We need jobs — good jobs, jobs that are available to all.

David Elliot is communications director for USAction, a grassroots advocacy group with affiliates and partners in 24 states. www.usaction.org