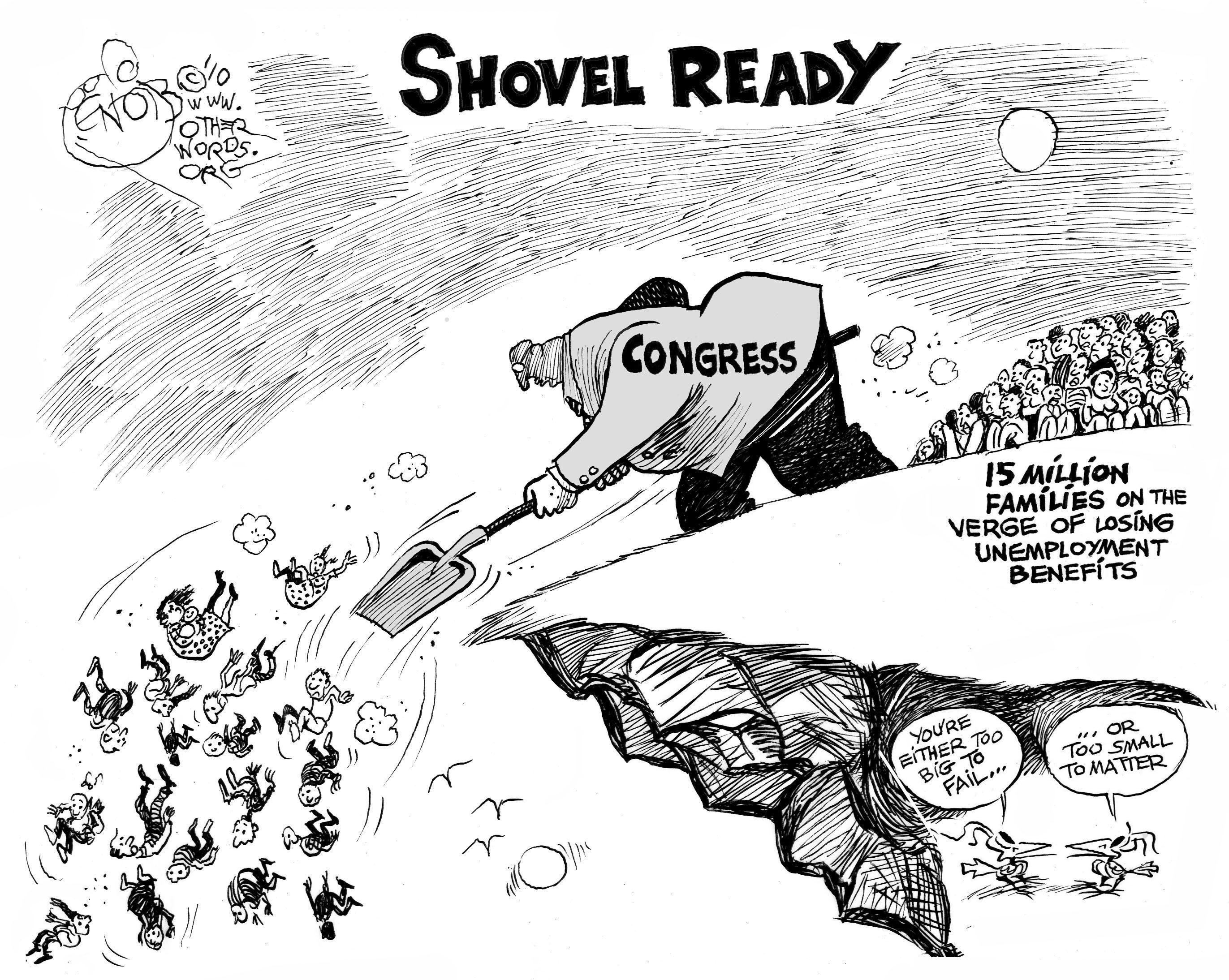 Fifteen million Americans are currently unemployed, and nearly half of that number has been actively and fruitlessly seeking employment for longer than six months. The depth and breadth of our labor market crisis is the greatest in over 50 years.

Though the unemployment rate dropped slightly in June from 9.7 percent to 9.5 percent, this is deceiving. 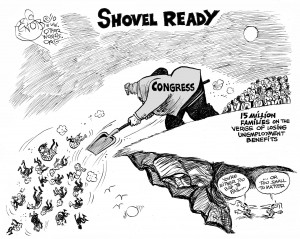 As noted economist Dean Baker of the Center for Economic and Policy Research explains, joblessness receded slightly only because 652,000 Americans left the labor force in June. Additionally, the number of employed workers fell by over 300,000 and the “establishment survey” of businesses, used by the Bureau of Labor Statistics, shows that average hourly wages and workweek hours are declining.

Thank goodness for unemployment insurance, which helps cushion us from abject poverty in the face of such a dearth of jobs. At least Congress consistently does one thing right. Historically, both sides of the aisle have been able to agree that when unemployed workers are unable to find jobs due to no fault of their own, a decent society provides a cushion so that they can weather the storm until able once again to contribute to rebuilding our economy.

Wait…Goodness is telling me that it has no reason to be thanked–Congress hasn’t consulted it. In fact, Republicans and deficit-hawk Democrats have not only turned their backs on goodness, but on the nation’s 15 million unemployed people, and the children and families who depend upon them.

Even though economists of all stripes and allegiances understand that unemployment benefits are among our most effective tools in a job crisis and the current recession, lawmakers are betting that fanning the flames of deficit hysteria will get them re-elected in the fall. Despite attempts to extend critically needed, but expiring, unemployment benefits, the Senate has once again let us down. Republicans filibustered attempts to help American workers. Sen. Ben Nelson of Nebraska, a Democrat, joined them, leaving Senate Dems one short of staving off a bit of suffering to millions of us before leaving town to enjoy their own sumptuous Fourth of July picnics.

Then there’s Sharron Angle, the GOP nominee vying for Majority Leader Harry Reid’s Nevada Senate seat. She sparked uproar akin to Rep. Joe Barton’s disgraceful apology to BP when she suggested that the unemployed in our country are spoiled. Following a barrage of criticism, she attempted trying to rewrite these comments with this puzzler as to what she really meant: “What has happened is the system of entitlement has caused us to have spoilage with our ability to go out and get a job…There are some jobs out there that are available. Because they have to enter at a lower grade and they cannot keep their unemployment, they have to make a choice now.”

As reported by the National Employment Law Project, the Economic Policy Institute, and the Department of Labor, there are nearly five workers actively vying for every one available job.

So, c’mon. We may be jobless, we may be angry and frustrated that jobs have disappeared and there is seemingly no political will to create more through a second stimulus, we may be plunging increasingly into poverty through no fault of our own. We may be dismayed that goodness has been abandoned by many on Capitol Hill. But we aren’t stupid. And we aren’t spoiled, and our children don’t deserve the long-term effects of poverty that Congress is foisting upon them in bids for votes in the fall elections.

Angle and the filibustering Republicans-plus- Nelson are out of touch and playing a dangerous game. Though they may ultimately lose office, the most immediate and devastated losers in their game are millions of Americans and their families who have been kicked to the curb, as their unemployment benefits expire.

Karen Dolan is a fellow at the Institute for Policy Studies, a progressive multi-issue think tank. www.ips-dc.org.