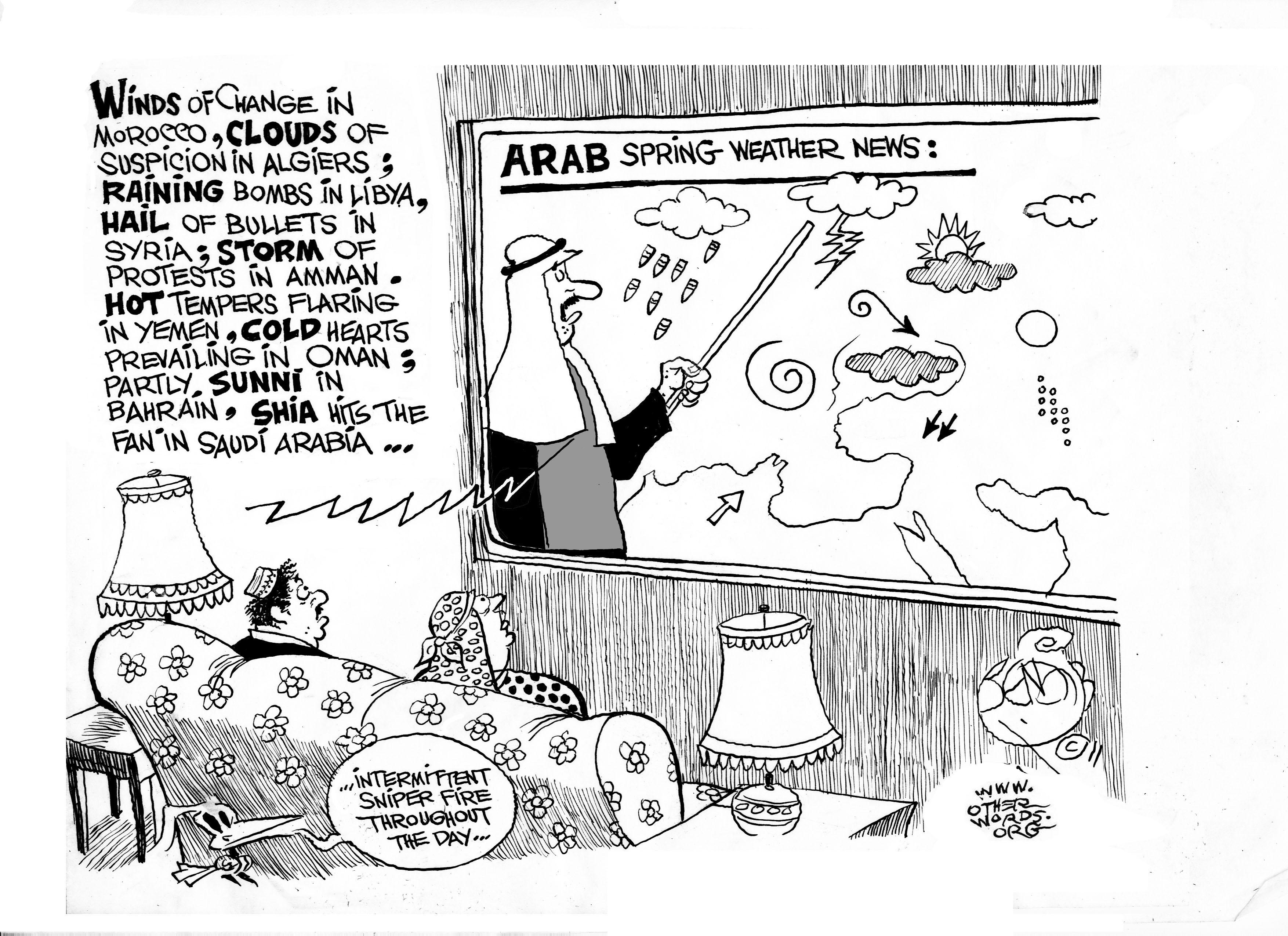 U.S. Silences on the Arab Spring are Deafening

The Obama administration has hardly said a peep about the need for democracy in Saudi Arabia or the other oil-rich states of the Gulf, even as those regimes are cracking down on the small but growing number of democracy activists in their midst.
By Hannah Gurman | May 2, 2011

The U.S. response to the democratic uprisings sweeping the Middle East and North Africa is as notable for its silence as for its uneven support for the Arab Spring.

It took weeks of incessant protest in Tunisia and Egypt before the Obama administration would say much or do anything to support the protesters in those countries. While Washington intervened in Libya to protect civilians from Muammar Gaddafi’s attacks, it’s responding to uprisings in Bahrain, Yemen, and Iraq with a particular quiescence. The Obama administration has hardly said a peep about the need for democracy in Saudi Arabia or the other oil-rich states of the Gulf, even as those regimes are cracking down on the small but growing number of democracy activists in their midst. 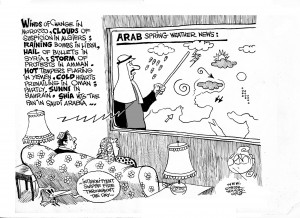 In recent weeks, the United Arab Emirates (UAE) has joined the list of Gulf states that, without eliciting much outrage from the United States, have silenced individuals demanding even modest steps toward democratic reform. The UAE, a federation of emirates including Dubai and Abu Dhabi, has no political parties and never holds free elections. In response to the revolutions in the region, public intellectuals, academics, and political activists in the country have advanced a democracy campaign of their own.

So far, in comparison to the massive street protests in Tunisia, Egypt, Bahrain, and Syria, their activities have been tame, but nonetheless historic. On March 9, the activists published a petition, probably the UAE’s first. Signed by 133 citizens, it calls for constitutional and parliamentary reforms, including free and fair elections.

It didn’t take long before UAE authorities began to crack down on the nascent democracy movement.

On April 8, a team of security forces and police officers in Dubai arrested one of the movement’s most prominent voices, Ahmed Mansour. After several days, he was finally charged with the possession of alcohol. Two days later, the authorities arrested Nasser bin Ghaith, an eminent economics professor, and Fahad Salem al-Shehhy, a prominent blogger. Both participated in the democracy campaign. Two more activists have since been arrested and detained.

The authorities now admit that Mansour’s real crime is speaking out against the government. Meanwhile, the government has dissolved the board of directors of the Jurist Association, one of four prominent civil rights organizations calling for direct elections.

Instead of publicly condemning this crackdown, Washington is underscoring its firm alliance with the UAE government. President Barack Obama met with Crown Prince Mohammed bin Zayed al-Nahayan of Abu Dhabi on April 26 to discuss “strong ties between the United States and the UAE and our common strategic interests in the region.” Journalists were barred from the White House encounter, aside from a photo-op. When Secretary of State Hillary Clinton met with UAE Foreign Minister Sheikh Abdullah bin Zayed in March, she told reporters that he’s her “colleague, counterpart, and friend.”

U.S.-UAE chumminess comes as no surprise. The UAE is a central ally in the region, a partner with the Libya military strikes, and a major purchaser of U.S. weapons. In 2009, the UAE was the largest foreign buyer of U.S. military equipment.

It’s increasingly a strategic partner for Western non-profit cultural and educational institutions as well. For example, New York University opened its Abu Dhabi campus this past fall and Manhattan’s Guggenheim museum is building an outpost off the coast of Abu Dhabi on Saadiyat Island.

Since their inception, these projects have stirred up controversy among artists, academics, and human rights organizations. Their concerns cover a wide span of social and political justice issues, ranging from the status of the migrant laborers who are building and maintaining the lavish extension sites to the protection of artistic and academic freedom for the artists and intellectuals who work there.

Human Rights Watch cited evidence of labor abuses at both the Guggenheim and NYU sites in a 2009 report. Now, NYU and the Guggenheim are refusing to condemn the recent arrests.

States, businesses, museums, and universities have a long history of divorcing the lofty ends that their leaders espouse from the means through which they actually function. In the Gulf states, this stance continues to promote the political and economic interests of “friendly” dictatorships.

With the Arab Spring in full force, it’s time for the United States to break the silence.

Hannah Gurman, an assistant professor at New York University’s Gallatin School of Individualized Study, is a columnist for Foreign Policy In Focus, which recently published a longer version of this commentary. www.fpif.org