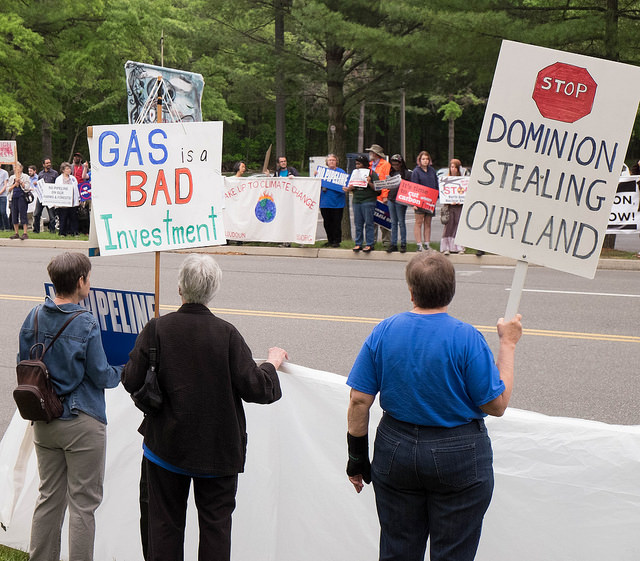 Virginia Is for Dirty-Energy Lovers

Dominion is skimping on solar and wind as it aims to build a fracked-gas pipeline and another nuclear reactor.
By Emily Schwartz Greco | May 13, 2015

If you live in Virginia and would like to shrink your carbon footprint, here’s what passes for good news: We’re now officially free to ban fracking. For two years, Old Dominion communities weren’t at liberty to prevent that kind of oil and gas drilling.

After the cities of Staunton, Lynchburg, and several other local governments expressed reservations over fracking or tried to prevent it, former Attorney General Ken Cuccinelli said they lacked the authority to block Big Fossil. In early May, Virginia Attorney General Mark Herring overrode his predecessor’s position and asserted that these local policies adhere to state law.

Either way, Richmond-based Dominion Resources, which wields near-monopoly power over Virginia’s electric grid, wants to boost demand for this environmentally hazardous drilling. It’s partnering with other companies on a $5 billion pipeline that will funnel gas fracked in West Virginia, Ohio, and Pennsylvania over a 550-mile route to Virginia and North Carolina.

Dominion’s dirty-energy ambitions for its home state don’t stop there. The company also intends to drop $10 billion on a third nuclear reactor at a site within 50 miles of Richmond, Charlottesville, and Fredericksburg.

The firm Clean Edge ranks big utilities according to how much power they draw from solar, wind, and other renewable options and their energy efficiency efforts. Dominion made the bottom of the list. 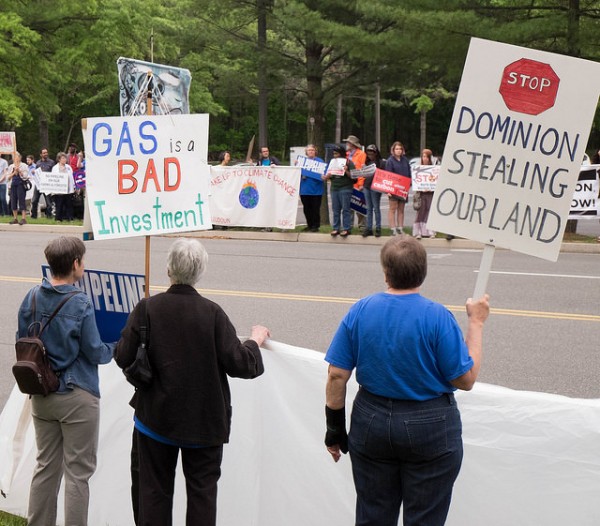 While it recently minted a plan to invest $700 million in solar projects in Virginia, that would barely chip away at the state’s reliance on power derived from coal, natural gas, and nuclear reactors. And the company just shelved an offshore wind pilot just as the first project of that kind is getting underway off the Rhode Island coast.

Why is Dominion getting away with paying lip service to green energy?

It’s not Virginia’s voters. Thanks to the coexistence of progressive areas near Washington, D.C. like Arlington, where I live — and conservative regions of the kind that surround Roanoke — Virginia is deep purple. Democrats and Republicans rotate through our governor’s mansion. While the GOP holds a slim majority in the state senate, both of our U.S. senators are Democrats.

Nor is it denial. Two out of three of Virginians, in line with the U.S. average, believe climate change is happening. The vast majority support policies that would force Dominion to get serious about wind and solar power. Yet we’ve got one of the country’s weakest renewable energy standards.

It’s about corporate campaign money. Dominion ranks among the state’s biggest donors to both major parties, according to the Virginia Public Access Project. The power company’s largesse makes most politicians — with the notable exception of a few Democrats who hail from Northern Virginia, like State Senator Adam Ebbin and Delegate Patrick Hope — willing to do its bidding.

Virginia Governor Terry McAuliffe, a Democrat, beat Cuccinelli, his Republican opponent, in 2013 partly by harping on his opponent’s climate denial. Yet McAuliffe fully supports Dominion’s plans to spend heavily on nuclear reactors and power plants fueled by fracked natural gas instead of making the big investments in wind and solar that would actually cut the state’s carbon footprint.

What could turn things around?

That brings me to another news flash. Some leading opponents of that big fracking pipeline are Republican landowners. They’re annoyed by Dominion’s failure to engage with people whose property is in its way, and they doubt it will help Virginians.

Now, the protests that erupt at Dominion’s shareholder meetings are becoming bipartisan. Even if Virginia’s dominant power company can buy political loyalty, at some point its customers and investors may force the company to clean up its act.