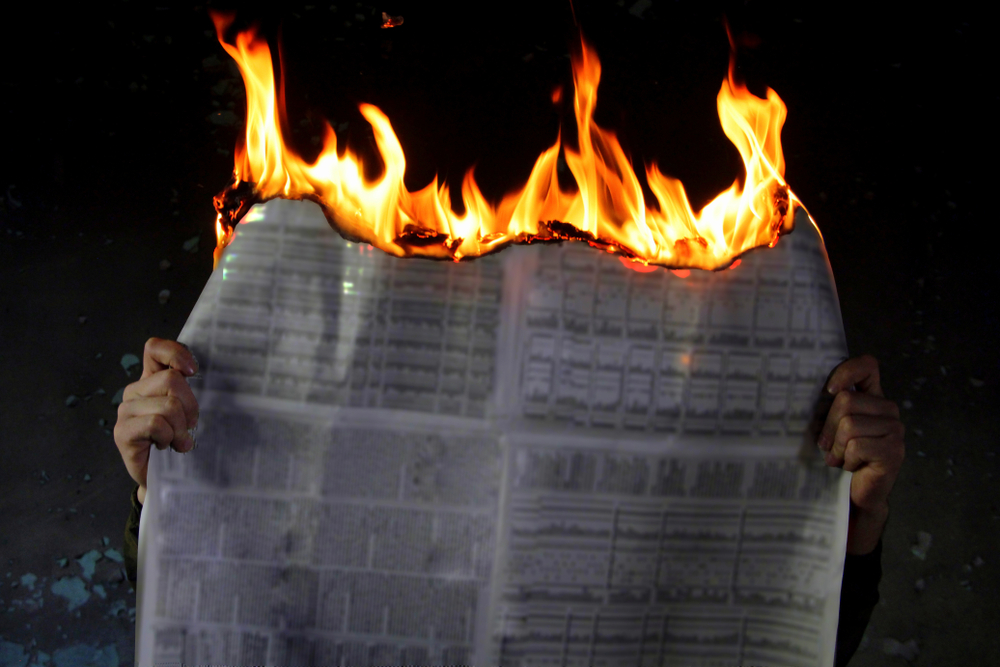 We can’t put a price tag on our free press — but unless we stop them, predatory investors can.
By Olivia Snow Smith | October 2, 2019

Though lacking the size and prestige of The New York Times or The Washington Post, The Storm Lake Times is arguably just as important.

Two years ago, the small, bi-weekly Iowa paper (circulation: 3,000) won the coveted Pulitzer Prize for taking on agricultural water pollution in the state. If it weren’t for vibrant local papers, stories like these might never come to light.

Unfortunately, all over the country, private equity and hedge funds have been scooping up these cash-strapped papers — and looting them into irrelevance or bankruptcy.

Here’s how it works.

Investors put down a fraction of the purchase price and borrow the rest — and then saddle the company with that debt. Layoffs and cutbacks follow, which leads to a shabbier product. Circulation and revenue decline, then more cuts, and the cycle accelerates.

Eventually the paper is a shadow of its former self, or turned to ashes completely. Wall Street wins, the public loses.

Perhaps the most infamous recent example was the breakdown of the 127-year-old Denver Post. Since private equity firm Alden Global acquired the paper, it has cut two out of every three staff positions — twice the industry rate for downsizing.

To add insult to injury, the firm has been using staff pension funds as its own personal piggy bank. In total, they’ve moved nearly $250 million into investment accounts in the Cayman Islands.

Alden’s Digital First Media runs many other big papers, putting hundreds of newsroom staff at risk of censorship and layoffs. Millions of readers, in turn, may learn only what Alden deems fit for them.

It’s not a new pattern. In 2008, a year after billionaire Sam Zell bought the Tribune Co. — publisher of the Chicago Tribune, Los Angeles Times, and other venerable publications — the company filed for bankruptcy, saddled with $13 billion in debt in what’s been called “the deal from hell.”

After it emerged from bankruptcy, the company was left in the hands of — you guessed it — private equity.

The march of these buyout barons continues. This summer, New Media Investment Group (owner of GateHouse Media) announced plans to buy Gannett. The $1.38 billion deal would unite one-sixth of all daily newspapers across the country, affecting 9 million print readers.

New Media anticipates cutting $300 million in costs each year, suggesting layoffs comparable to those at The Denver Post are in the offing — even as the company and its investor owners harvest profits.

This is a crisis. This country lost more than a fifth of its local newspapers between 2004 and 2018, while newspapers lost almost half of their newsroom employees between 2008 and 2018.

A few lawmakers are catching on.

Senator Bernie Sanders recently introduced an ambitious plan of his own, calling for a moratorium on major media mergers and encouraging newsrooms to unionize nationwide.

Newspapers have been critical to American democracy since its founding. By allowing huge corporations to gut newspapers in the name of making a buck, we’re putting a price tag on that democracy when we need it most.

Olivia Snow Smith is a recent graduate of Bard College and the communications intern for Take On Wall Street. This op-ed was adapted from TakeOnWallSt.com and distributed by OtherWords.org.