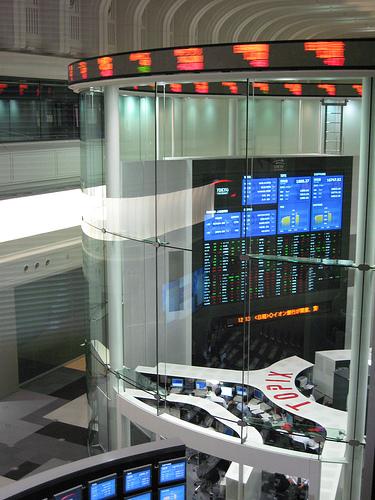 The high-frequency trading that dominates the stock market could trigger another global financial crisis.
By Sarah Anderson | May 7, 2012

The power suits making billions off the stock market are always trying to assure us that their trading serves a socially redeeming purpose. They steer money to companies and industries that make our economy more productive, they claim.

In reality, the majority of stock trading today has absolutely nothing to do with helping companies raise capital to innovate and create jobs. Thoughtful investors don’t drive today’s Wall Street. Computers do.

About 55 percent of all U.S. stock trading last year was performed by computers programmed to make trades at speeds measured in the millionths of seconds. The goal of these “high-frequency traders”? To move faster than the next guy to exploit microscopic differences in stock prices on different exchanges.

If you can buy a stock in New York and sell it in London a split second later for a fraction of a penny more, and do that millions of times per day, those pennies can add up. One hedge fund alone, Citadel, made $1 billion in profits off such games in 2009. 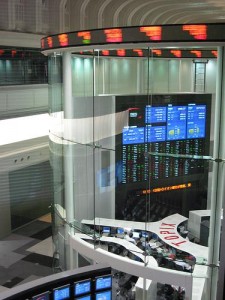 As such high-volume, high-frequency trades have come to dominate the market, investment in small businesses has declined. For the computers, it’s a lot easier to flip stocks all day than to identify promising enterprises and stick with them.

Oh, and sometimes the computers go haywire. Two years ago, high-frequency traders fuelled a dramatic freefall in the stock market. A trillion dollars disappeared in a matter of minutes.

That time the market recovered by the end of the day. But next time we may not get so lucky. Bart Chilton of the Commodity Futures Trading Commission has warned that if the Flash Crash had taken place in the morning instead of the afternoon, it could have spread like wildfire to global markets.

The high-frequency traders claim they do serve a social good by providing the liquidity that oils the whole financial machine. But as Elara Capital Chairman Avinash Persaud and others have pointed out, during times of crisis, the speed freaks try to “run ahead of the trend, draining liquidity just when it is needed the most.”

So what’s the government doing to prevent these speed demons from driving us all into another global financial crisis? Not very much. Securities and Exchange Commission chief Mary Schapiro admits that she’s worried and is exploring various ways to address the problem.

But so far the agency’s main action has been to introduce circuit breakers to stop the trading of a particular stock if the price rises or falls drastically in a short time. These are merely Band-Aids that fail to address the root cause of the problem.

There are still no limits on the number of orders firms can make or cancel each second. The government doesn’t even have the ability to monitor such trading as it’s happening. It took regulators nearly five months to piece together what happened during the Flash Crash of May 2010.

The Obama administration has also opposed proposals for a small tax (less than 0.5 percent) on each trade of stock. Such taxes would make high-frequency trading less profitable while encouraging longer-term productive investment.

So buckle up. The speed freaks are driving our financial system.