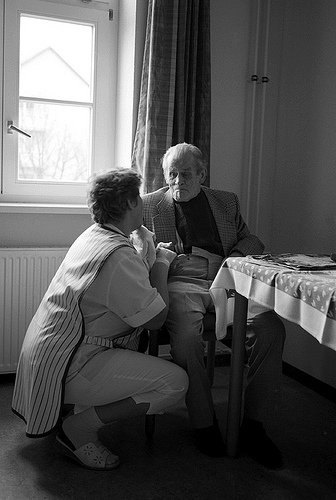 We’re All in This Together

Lolita Lledo spends all day talking on her cell phone, texting, and checking her Facebook page, though not for the reasons you might think.

As the associate director of the Pilipino Workers Center in Los Angeles, she relies on social networking to keep in touch with home care workers.

These caregivers help seniors and people with disabilities to bathe, dress, and prepare food, allowing them to thrive in their own communities rather than go to nursing homes.

Many of the people Lledo works with were nurses, teachers, and engineers in their home countries. Now they’re working long hours in isolation and typically earn only about $21,000 a year.

Lledo’s group provides logistical and emotional support. It’s also organizing caregivers to improve labor conditions in one of the nation’s most precarious lines of work. The Fair Labor Standards Act exempts their industry from minimum wage and overtime protections.

The “companionship exemption” dates back to 1974, a time when the kind of care workers do in homes nowadays was done in institutions. Last year the Department of Labor finally issued new regulations — but delayed implementation until January 2015.

Private home care agencies and other industry groups are lobbying for an even longer delay and have sued the Department of Labor to permanently block the protections altogether.

The International Franchise Association, which represents everything from 7-11 to KFC, is leading the charge. Why? Because home care happens to be one of the most profitable lines of work for franchises.

Realizing how much they have in common, low-wage workers from a variety of industries are joining together to demand a living wage, bringing many consumers along with them.

Organizers like Lledo have realized that pitting workers against consumers won’t solve the “care crisis.” That’s because both sides of the working relationship are in trouble. Home care workers can’t afford to put food on the table, and seniors are already struggling to get Medicaid to cover all the hours of home care they need.

Lledo and I work together through Caring Across Generations — a national effort to align worker rights, disability rights, and senior rights organizations into a unified campaign. We believe that most families would pay more if they could afford it.

Consumer advocates say better pay and working conditions in the industry would translate into less turnover and higher quality care. As a Caring Across Generations leader, Lledo helps to organize care councils where all the stakeholders in Southern California can meet.

Big box stores pay so little that many workers stocking their shelves rely on public assistance programs like food stamps to cover their basic needs. That means taxpayers are actually subsidizing low wages for those workers. The same is true for nearly half of all U.S. home care workers.

From coast to coast, low-wage workers are sparking change by getting consumers to join their efforts. In addition to the unlikely alliance underpinning Caring Across Generations, these campaigns include the “Fight for 15” now taking aim at the fast food industry and the Coalition of Immokalee Workers’ Fair Food Campaign, which is encouraging grocery store shoppers to support labor rights for Florida’s tomato pickers.

As Lledo turns her attention back to the constant buzzing of her phone, I’m reminded that regardless of how many different groups we advocates can bring to the table, frontline organizers like her are the ones holding us all together.

Tiffany Williams is a senior staffer for the Global Economy Project at the Institute for Policy Studies and the coordinator of the National Domestic Workers Alliance’s Beyond Survival Campaign. www.ips-dc.org.Distributed via OtherWords (OtherWords.org)