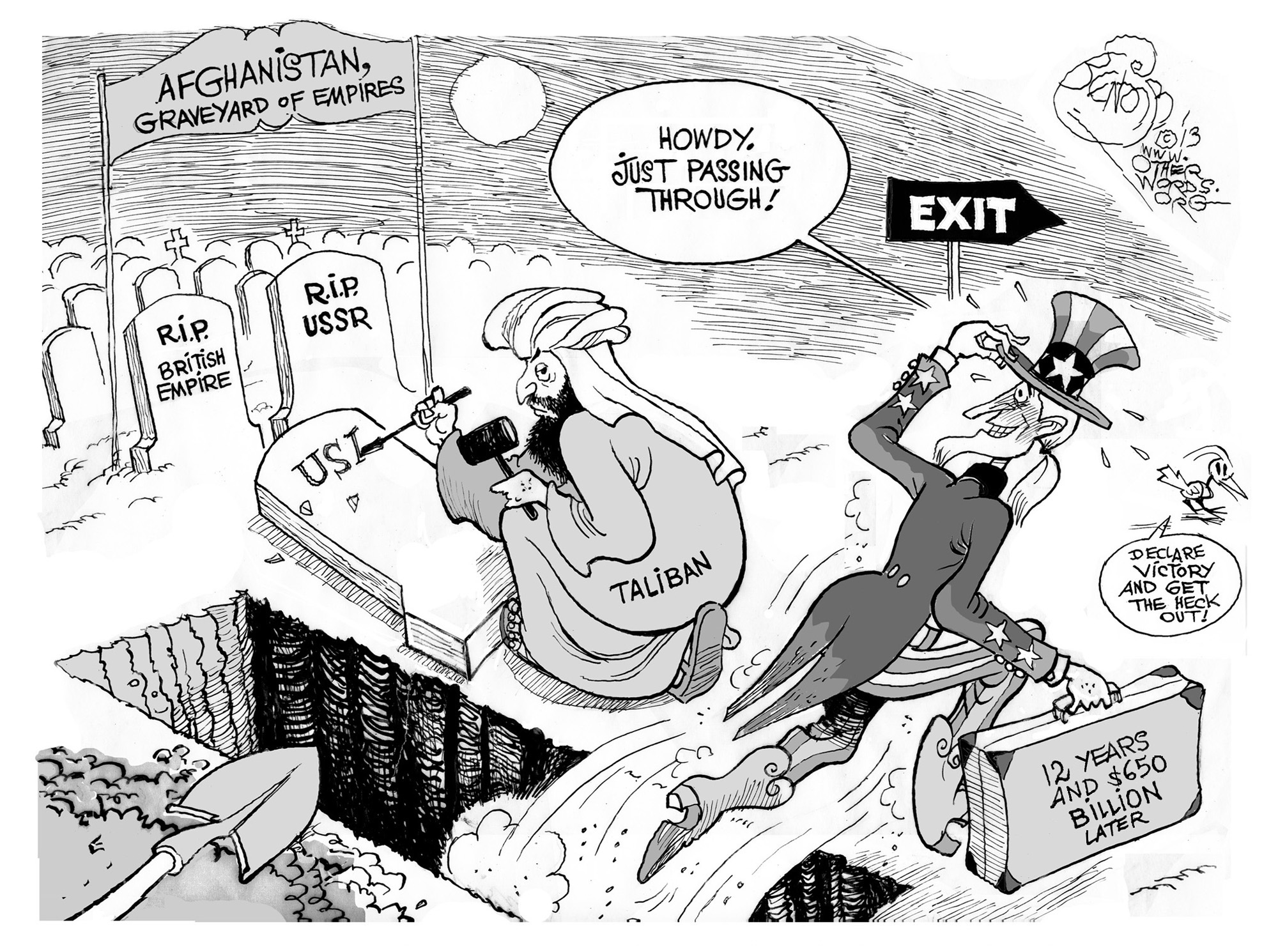 Declaring Victory in Afghanistan, an OtherWords cartoon by Khalil Bendib.

We’ve Got to Get Out of That Place

Rather than prolonging the quagmire in Afghanistan, Obama should take this opportunity to finally to honor his commitment to bring our troops home.
By John Isaacs, Usha Sahay | February 27, 2013

The U.S. war in Afghanistan is beginning to wind down. As President Barack Obama promised in his State of the Union address, half of the U.S. troops there will return home by this time next year.

But many details remain hazy. For instance, what will happen with the 110,000 military contractors now stationed in the country? And how many troops will remain after the military mission officially ends in December 2014?

Numbers aren’t the only uncertainty about the war, now in its 12th year. How did we end up in a nation-building quagmire with no good exit strategy? Why did we attempt to simultaneously fight two such wars in the same decade?

Finally, why should this quagmire continue into 2014 and beyond when it’s clear that the U.S. mission has failed? 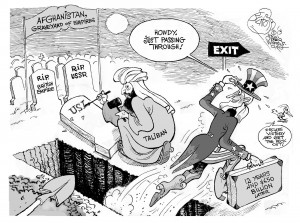 Declaring Victory in Afghanistan, an OtherWords cartoon by Khalil Bendib.

After most U.S. troops return in 2014, thousands of soldiers and Pentagon contractors are likely to remain in Afghanistan to assist the Afghan army and to perform counterterrorism missions. This transition plan takes largely the same military-centric approach that has failed us for years.

To avoid prolonging our mistakes in the war’s final phase, Washington must acknowledge that Afghanistan’s problems are at least as political and economic as they are military.

Our misdirected focus on military might is most visible in the Western coalition’s signature project: the buildup of an Afghan army that’s too big. The current force of 352,000 soldiers is too large and too expensive for the Afghan government to sustain. Already, there are plans to shrink the army by a third over the next few years.

Moreover, despite ambitious Western efforts, the Afghan army is still floundering. “We have been obsessed with quantity over quality,” said one U.S army officer. Only one of 23 Afghan brigades can operate without Western support, and rates of soldier desertion remain troublingly high.

Keeping our soldiers on the ground won’t solve these problems, as illustrated by the failure of the 2010 surge to improve the security situation. And the troubles go deeper than that. Even the best-trained army cannot hold back an insurgency in the absence of a more effective political system. Time and again, Taliban strongholds have been cleared only be retaken later due to unstable conditions.

Herein lies the folly of our strategy. Troops and tanks can’t stabilize Afghanistan. In fact, they may be worsening the situation.

In 2011, then-Defense Secretary Robert Gates, borrowing a quip originally made by General Douglas MacArthur about the Korean War, declared: “Any future defense secretary who advises the president to again send a big American land army into Asia or into the Middle East or Africa should have his head examined.”

In Afghanistan, there’s no sign that a few more months or years of fighting will bring any major change in fortune. Withdrawing all U.S. soldiers is, at this point, the soundest option — and the one the American public overwhelmingly favors.

By speeding up the troop drawdown, and leaving no soldiers behind after 2014, Obama can acknowledge what American policymakers have avoided for too long: this conflict has no military solution.

Rather than prolonging a war we shouldn’t be fighting, Obama should take this opportunity finally to honor his commitment to bring our troops home.