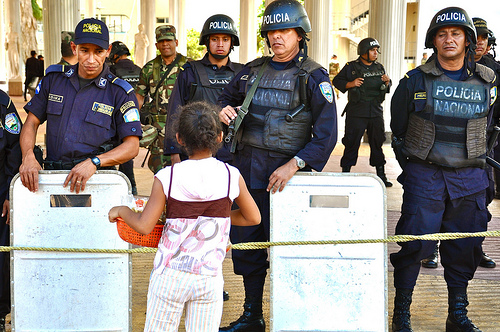 What about Gun Control Abroad?

The killing of four Hondurans by local police backed by DEA agents highlights the gruesome effects of our militarized War on Drugs.
By Riahl O’Malley | February 13, 2013

A 14-year-old Honduran, Hasked Brooks Wood, perished when police in the town of Ahúas opened fire on him and other civilians riding in a boat down a winding river. This incident, in May 2012, didn’t garner much U.S. media coverage. But it should have — because the police officers involved in the attack told government investigators they received their orders from U.S. Drug Enforcement Administration agents.

The killing has brought untold grief to the quiet indigenous community. After the attack, parents choked on their words describing the painful event to reporters. Local organizations and human rights groups demanded action to assure that what happened in Ahúas would never happen again.

Yet nearly a year has passed and those responsible haven’t been brought to justice.

Members of Congress are now joining the call for answers about what happened in Honduras. Rep. Hank Johnson (D-GA) and 57 other members of Congress sent a letter to Secretary of State John Kerry and Attorney General Eric Holder calling for an investigation into the DEA’s role in the Ahúas killings.

The letter also calls for investigations into other alleged abuses perpetrated by Honduran police and military officials, which have risen to “unprecedented heights” since the coup d’état in 2009.

The mass murder of children and educators at Sandy Hook Elementary in December has moved the nation to consider how to keep our children safe. Gun control, for a change, is proving to be a top issue on the national agenda for months on end. 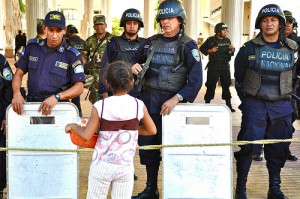 But it’s also time to consider the international side of gun control. In Honduras, human rights groups are urging Washington to better control the flow of weapons from the United States into their country. Too often, weapons land in the wrong hands because we placed them there.

Under the mantle of the War on Drugs, the United States has given billions in arms and training to Latin America’s police and military forces. Washington has tried the same strategy from Colombia to Mexico and through Central America in a failed bid to stop drug cartels from getting their product to American consumers.

Rather than restrict the flow of illegal drugs into our country, U.S. firearms fuel violence in Latin America. Experts say that between 60,000 and 100,000 people have been killed in Mexico since the U.S.-led War on Drugs began there in 2006.

And we arm both sides of the conflict. About 70 percent of the guns used by Mexican drug cartels and other criminal groups come from the United States, according to the Bureau of Alcohol, Tobacco, Firearms, and Explosives.

Our drug policy is turning people’s homes and communities into a battleground.

In 2012, a group of former presidents, prominent diplomats, and economists from throughout the Americas declared that the Drug War had failed. They pleaded for substantive reform in our drug policy.

Advocates in Honduras are also pleading for change. “The U.S. must…find a way of addressing its massive demand for drugs that does not involve turning indigenous territories into war zones” says Honduran human rights defender Miriam Miranda.

Rep. Johnson’s letter is the sixth one that lawmakers have sent the State Department about Honduras since a human rights crisis erupted after the coup. Washington has withheld millions of dollars in military aid to Honduras due to human rights abuses and violations of international law. However, this suspension just pauses our militarized drug policy.

The tragedy in Ahúas demands something more. It’s time for Washington to try a new approach in its fight to halt drug traffic.

Riahl O’Malley works in Nicaragua and Honduras for Witness for Peace. WitnessforPeace.org
Distributed via OtherWords. OtherWords.org