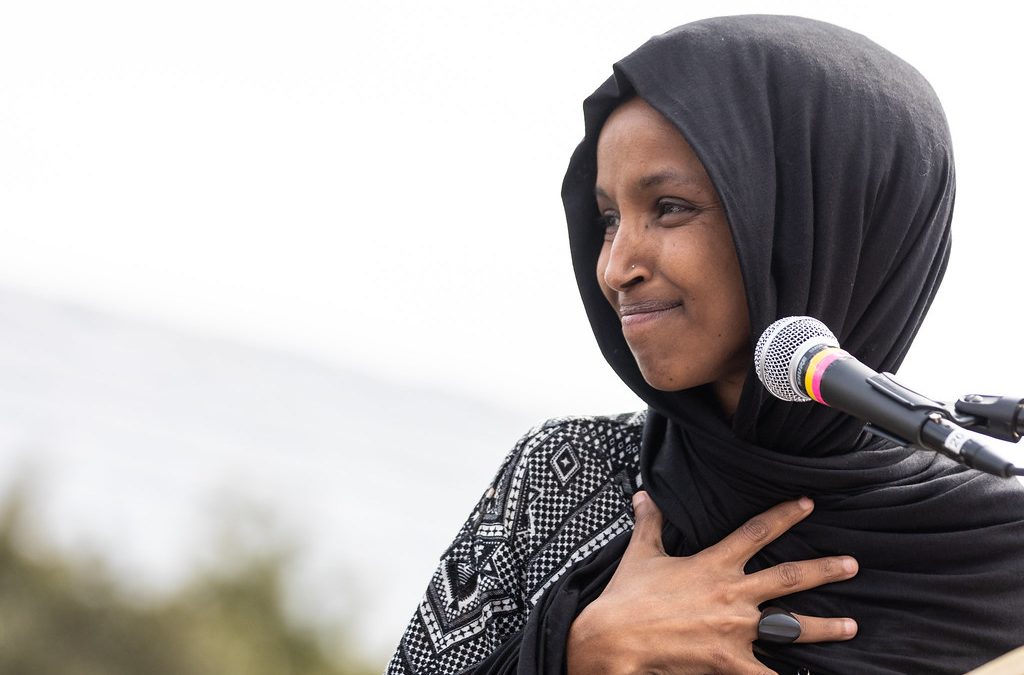 When They Go Low, the Squad Goes Bold

The four congresswomen are responding to vile attacks with bold ideas to combat inequality — and help their constituents.
By Sarah Anderson, Negin Owliaei | July 24, 2019

“We are one of the wealthiest countries in the history of this world. And yet millions of adults in the United States still don’t have health insurance,” Rep. Ilhan Omar told her Minnesota constituents at a July 18 town hall.

A day after the president of the United States incited rally goers to chant “send her home,” the congresswoman was in her home district, hosting a policy-heavy discussion of Medicare for All.

The president’s name wasn’t mentioned once. After a week of vile attacks, Omar announced she wouldn’t let the president — or the often dismissive Democratic Party leadership — distract her from doing what she was sent to Washington to do.

She’s not alone. Despite the frenzy, Omar and Reps. Rashida Tlaib, Alexandria Ocasio-Cortez, and Ayanna Pressley — popularly referred to as “the squad” — are keeping the focus on policies to bring justice to their constituents.

Omar and Tlaib have sponsored bills that run the gamut from canceling student loan debt to forbidding auto insurance companies from discriminating based on credit scores.

Ocasio-Cortez has earned praise for her masterful questioning during House hearings, and for introducing the enormously popular framework for a Green New Deal.

Meanwhile, Pressley has been one of the Green New Deal’s leading advocates, speaking at one of the country’s first town halls on the issue about its focus on “equity and economic justice” and the opportunity it provides to “transform the economy.”

The same day Omar received standing ovations at her Medicare for All town hall, Tlaib was surrounded by laid-off workers as she spoke out about how private equity funds have looted companies in her Detroit district, destroying the jobs and pensions of workers who’ve spent decades building up their firms.

“People who’ve worked hard their whole lives to earn a pension deserve to be able to rely on that money still being there,” Tlaib said.

She was speaking in support of the Stop Wall Street Looting Act, which would create protections for workers and communities against the vulture-like private equity firms that have plundered Toys R Us, Payless, and many other companies to line investors’ pockets.

Pressley was also busy that day, releasing an op-ed in Teen Vogue co-authored with Rep. Pramila Jayapal that explained why raising the minimum wage was a women’s issue. “All women — whether they are sports champions in the limelight or the caregivers, servers, and others at the low end of the income ladder — deserve fair pay,” the congresswomen wrote.

Hours later, the House voted to pass the Raise the Wage Act, which would incrementally boost the minimum wage to $15 an hour and end exclusions that kept tipped workers, people with disabilities, and young people from earning equal pay.

Earlier in the week, Ocasio-Cortez used yet another House hearing as a public education opportunity while questioning Facebook exec David Marcus about the tech giant’s recently announced new cryptocurrency. Ocasio-Cortez connected Libra to corporate-controlled currencies of the past that allowed companies to price-gouge their own workers.

“We are discussing a currency controlled by an undemocratically selected coalition of largely massive corporations,” the congresswoman said, proving again her adeptness at finding the heart of concern when it comes to complicated financial topics.

While people across the country have vocalized their support for the women, their districts in particular are paying attention. “That’s my congresswoman,” Detroiter Chris McClain told news outlet MLive.com about why the president’s attack felt personal. “Truly, she represents me.” Local news outlets found Pressley’s constituents felt the same.

And Omar’s constituents provided the most fitting tribute of all. As the congresswoman stepped off the plane in Minnesota on Thursday, residents of her district greeted her with a moving chant: “Welcome home, Ilhan.”

Sarah Anderson directs the Global Economy Project at the Institute for Policy Studies, where Negin Owliaei is a researcher. They co-edit Inequality.org, which ran an earlier version of this piece. Distributed by OtherWords.org.