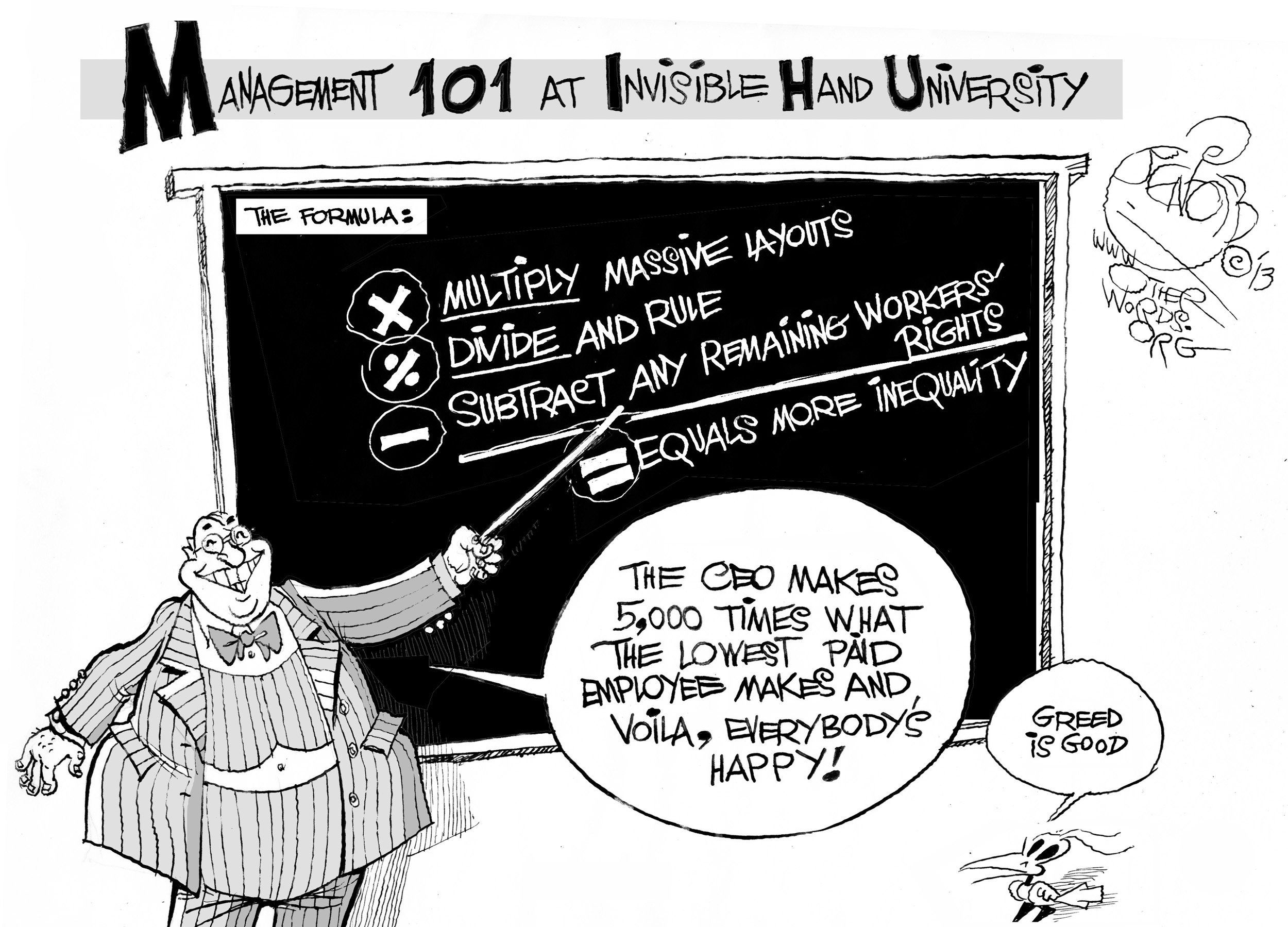 When Workers Foot the Bill for Bailouts

Peter Drucker, the analyst who founded modern management science, died in 2005 at age 95. When he died, business leaders worldwide hailed this Austrian-born American for his enormous contribution to enterprise efficiency and effectiveness.

But Peter Drucker also cared deeply about enterprise morality. In his later years, he watched — and despaired — as downsizing became an accepted corporate strategy for pumping up executive paychecks. Drucker could find “no justification” for letting CEOs benefit financially from worker layoffs.

“This is morally and socially unforgivable,” he would write.

If Drucker were still writing today, he’d be just as unforgiving. CEOs these days aren’t just slashing worker jobs to ensure themselves windfall after windfall. They’re slashing worker pay — and no CEO may be benefiting more from shrinking paychecks than Ford chief executive Alan Mulally.

Mulally has gained oodles of media plaudits for restoring Ford to profitability without having to take any taxpayer bailout. But Mulally has indeed enjoyed a bailout — from Ford’s workers.

Entry-level workers at Ford used to make $28 an hour. That rate fell by half when the auto industry crunch first hit five years ago and now has inched a little bit higher. All Ford workers, not just new hires, have given up cost-of-living wage adjustments and health benefits as well.

Ford has just announced that Mulally snagged a pay package worth just under $21 million in 2012, after collecting $29.5 million the year before. His personal rewards for 2012 amount to nearly double that of his chief German rival, Daimler CEO Dieter Zetsche, and his pay package dwarfed the $1.48 million that Toyota CEO Akio Toyoda pocketed.

But the magnitude of Mulally’s executive excess since Ford workers started coughing up concessions only becomes clear when the focus shifts to the stash of the automaker’s shares he now holds. In just over a half-dozen years, CNN Money reports, Mulally “has amassed holdings valued at more than $300 million.”

And this total doesn’t take into account the nearly $75 million Mulally has banked in annual salary, cash bonuses, and other direct compensation since 2006.

Among America’s CEOs, of course, Mulally hardly stands alone. The outrageous climb in American CEO pay has been building for some time. 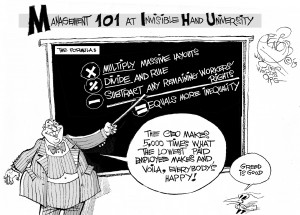 So what should we do about CEO compensation? In France, the newly elected François Hollande government has placed a cap of 450,000 euros — about $580,000 — on executive pay at the 52 companies where the French government holds a majority stake. The cap will essentially limit executives at these companies to no more than 20 times the pay of their lowest-paid workers.

The French people, for their part, would like to see the government apply a similar cap to executives at all corporations in the private sector.

Earlier this month, just after Swiss voters passed a referendum that bans executive signing and merger bonuses, a major pollster asked the French whether they favored creating a “maximum wage” for all corporate CEOs. A whopping 83 percent of the French public supported the idea.

The French may have been reading their Peter Drucker. He believed that American CEOs should earn no more than 20 or 25 times their workers’ average pay. Last year, in Great Recession-ravaged Michigan, Alan Mulally pulled in over 500 times the pay of Ford’s lowest-paid workers.