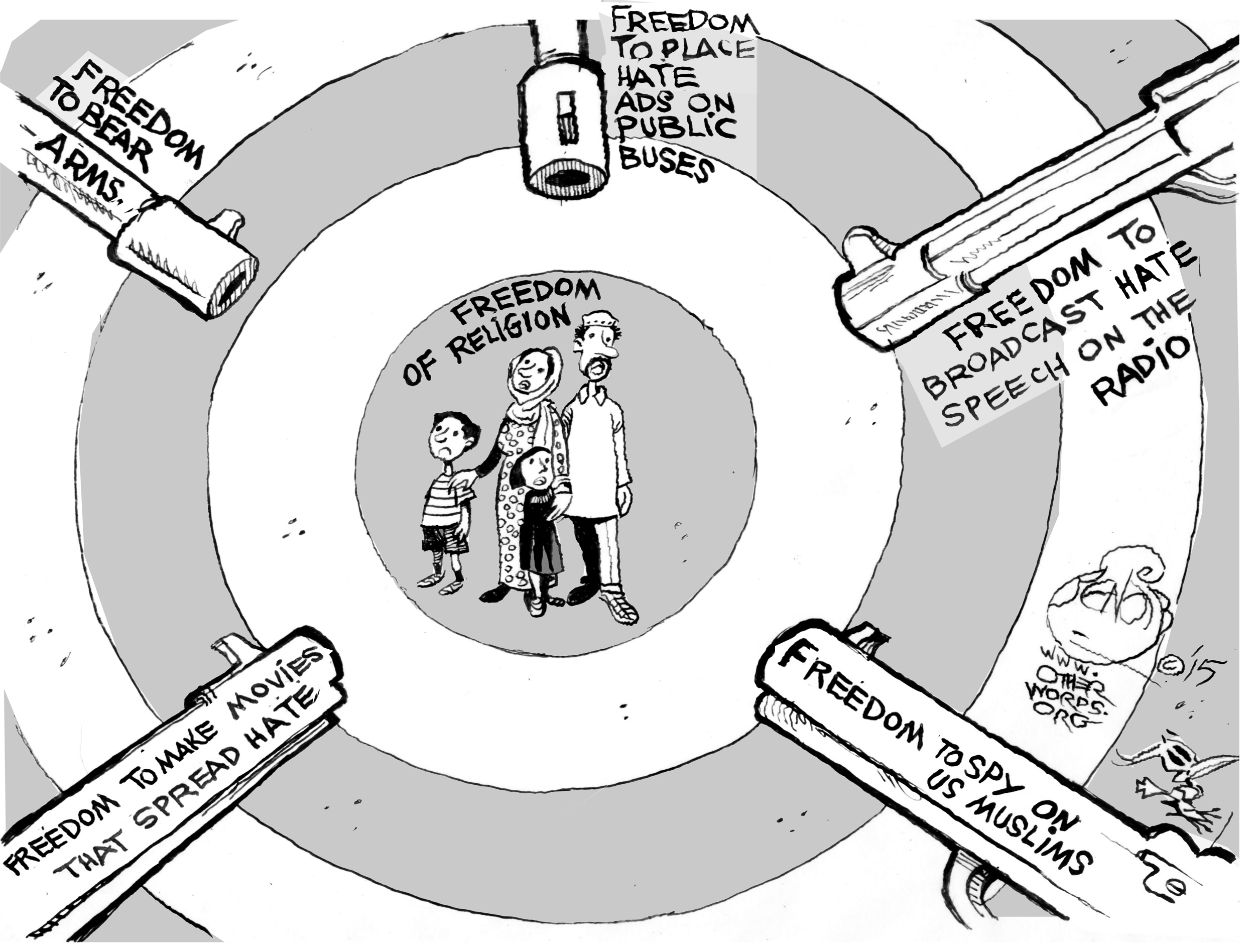 Caught in the Crosshairs, an OtherWords cartoon by Khalil Bendib

When Your Armed Neighbor Comes Knocking

Why is it legal to carry a gun to a noise complaint?
By Mitchell Zimmerman | February 18, 2015

A North Carolina grand jury has indicted an atheist with a history of virulently anti-religious statements in the murder of three Muslim American students in Chapel Hill — a young couple and the wife’s sister.

The victims’ family and friends say the killings were the fruit of anti-Muslim hatred, but local police say it resulted from a “parking dispute.”

The perpetrator, Craig Hicks, reportedly had complained to the slain couple, Yusor Mohammad Abu-Salha and Deah Shaddy Barakat, about parking and noise issues. In at least one instance, a witness recalls, he carried one of his many guns to their door.

Let’s imagine, as Hicks’ wife insists, that Hicks actually harbored no antagonism toward Islam in particular. Let’s assume for now, as Hicks’ attorney suggests, that Hicks was just a deranged guy who lost control of himself and shot three people in the head.

We still have to ask: What kind of country do we live in, where it’s legal for a man to bring a weapon to a noise complaint? Or a parking dispute?

I’m trying to imagine what young Barakat and Abu-Salha might have done after their neighbor came by, carrying a rifle or bearing a handgun on his hip. Go to the police? 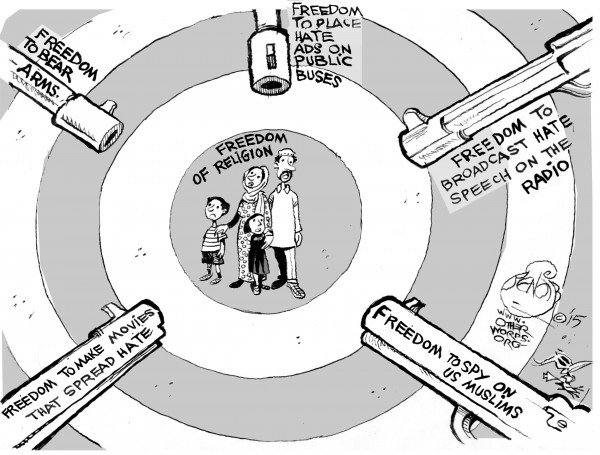 Caught in the Crosshairs, an OtherWords cartoon by Khalil Bendib

Deah: “The man across the way came to our door brandishing a weapon. We’re afraid.”

Officer: “Brandishing? What do you mean? What did he do?”

Deah: “I opened the door, and he started ranting about how much noise our visitors make, about them parking where they’re not supposed to. All the while he was holding a rifle in front of him. We were frightened.”

Officer: “Did he point the weapon at you?”

Officer: “There’s nothing illegal about carrying arms in this state.”

Yusor: “He’s been making fun of the way we dress — he hates us because we’re Muslims.”

Officer: “It’s a free country. It’s too bad that some people are biased, but there’s nothing we can do about that.”

Some people — most people, I would hope — understand that bringing a gun to complain to a neighbor is inherently threatening. But going to the cops wouldn’t have solved that problem.

Not in North Carolina, anyway. Or in any other state where the law enshrines a right to carry guns openly.

Should the murdered couple have armed themselves for self-defense? These charity-supporting, life-loving, model students probably couldn’t imagine themselves defending their castle, standing their ground, or shooting first the next time their gun-wielding neighbor looked at them funny.

I suppose, in the end, they told themselves, “No one would actually shoot someone over things like this, would they?”

Only in America, I was going to say. But that would be unfair. The same thing could happen in Honduras or the Central African Republic — or any other place lacking meaningful limits on firearms.

Don’t worry, gun owners. I’m not saying that anyone should take away your guns. What would be the point? The government can’t even take away your 30-round clips, which have proven most useful for murdering dozens of small children in a few minutes.

This isn’t England or France, after all. There’s a “sacred right” to bear arms in our country.

My advice to potential victims: If you’ve drawn the angry attention of a neighbor who goes about armed, move. Move while you can. Don’t tell yourself you’re being silly. Certainly, no outside authority can restrain that person if he decides to kill.

Mitchell Zimmerman is an attorney who lives in Northern California. He supplements his work as a Silicon Valley intellectual property lawyer with pro bono work on behalf of the underrepresented.
Distributed via OtherWords.org.