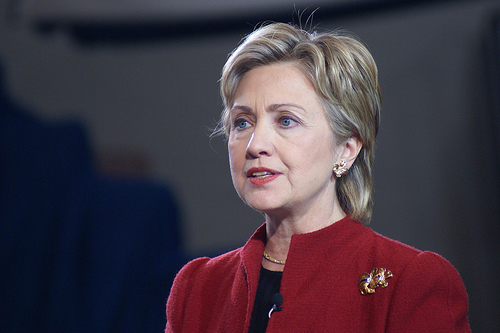 Where Are the Populist Democrats?

Hillary Clinton’s take on what to do about inequality is weaker than Canadian hot sauce.
By Jim Hightower | April 22, 2015

It’s futile to hope that the GOP’s gaggle of corporate-hugging, right-wing presidential candidates will seriously address the issue of rising inequality in our land. How about the Democrats?

Well, Hillary Clinton has warned that “extreme inequality has corrupted other societies.”

Uh…yes. But what about our society? Clinton says: “We have to have a concerted effort to meet a consensus about how to deal with this.”

Huh? That’s not an answer, much less a solution. It’s a political tap dance around a crucial matter facing America. Why would she dodge a chance to swing away at a down-the-middle issue that’s right in the wheelhouse of her party’s populist strength?

After all, recent polls show majority public support for direct government action to reduce the wealth gap, from raising taxes on the superrich to raising the minimum wage above the poverty level.

Turns out there’s one tiny constituency whose opinion outweighs all others on this issue: the 1-percenters.

Clinton and other top Democrats are weaker than Canadian hot sauce when it comes to embracing the real populism that voters want. Here’s a possible explanation for that mystery: Only 13 percent of the superrich think government should take action to redress inequality.

These privileged Americans blame widening inequity on the very people losing their jobs, income, and wealth. They claim that hard-up people should simply improve their work ethic and character.

Why would Democrats care what these few elites think? Well, because meek Democrats like Clinton have become so dependent on rich people’s campaign checks that they let them restrict the party’s policies and message, thus alienating the workaday majority.

When both parties kow-tow to money, the people’s needs are ignored, and politics becomes illegitimate.