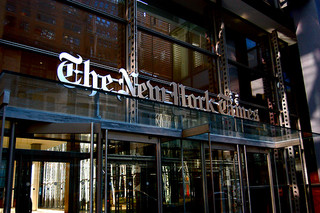 Where Are the Women?

Even with Jill Abramson at the editorial helm, men still dominate The New York Times.
By Amy Kroin | August 28, 2013

At the exact moment that I’m writing this, the New York Times homepage is displaying stories authored by 35 men — and eight women.

And three of those eight articles were coauthored with men.

You can find this data at WhoWritesFor, a website that tracks authorship on the newspaper’s homepage. The site, created by developer Andrew Briggs, uses software to “scrape” the Times’ front page every five minutes. WhoWritesFor went live on July 30 — and in its first week of operation chronicled 187 stories by men and 108 by women.

Though the data vary from day to day, one stat remains constant: The number of stories authored by men always eclipses the number written by women.

Things are even more skewed in the Gray Lady’s Op-Ed section. Women authored just 22 percent of the op-eds the Times published in 2011 — up a paltry 5 percent from 2005, the Op-Ed Project found.

It may be unfair to single out The New York Times when so many comparable publications are guilty of the same sin. But The New York Times prides itself on being the paper of record — and given that it’s had Jill Abramson at the editorial helm for the past two years, you’d like to think that this is the place where change can happen.

But it’s more complicated than that. In fact, the problem goes right to the question of who owns the media.

And the all-too-predictable answer to that question is men. In particular, white men.

Women comprise over 51 percent of the U.S. population but hold less than 7 percent of all TV and radio station licenses. With consolidation in the TV landscape officially out of control — Gannett, the Sinclair Broadcast Group, and the Tribune Company have all been on a buying spree — the opportunities for women have diminished all the more.

And if a Federal Communications Commission attempt to weaken its ownership rules moves forward, this trend will only worsen.

There’s an unfortunate domino effect at work here: Men own the media, men assign other men to write a majority of the top news stories, and men interview other men for these choice assignments.

The 4th Estate Project’s study of 2012 election-year coverage found that major U.S. newspapers and TV news programs featured up to seven times as many quotes from men as women. Men’s voices were dominant even in stories on abortion, birth control, Planned Parenthood, and women’s rights.

The 2013 Status of Women in the U.S. Media report, produced by the Women’s Media Center, had similar findings, noting that men were “far more likely to be quoted than women in newspapers, television and public radio.”

Yes. Public radio. Even NPR leaves women out of the conversation.

The truly sad part is that none of this comes as a surprise. After all, we live in a culture where it’s big news that PBS NewsHour chose two women — longtime contributors Gwen Ifill and Judy Woodruff — to serve as co-anchors. This is primetime TV’s first-ever female co-anchor team. Break out the cosmos!

Actually, let’s put those lady drinks aside for now. Women journalists should celebrate when sites like WhoWritesFor no longer have a reason to exist.

Amy Kroin is the editor of Free Press.  Her work has appeared in The New York Times, The Washington Post, The Boston Globe, and Salon, among other publications. www.freepress.net
Distributed via OtherWords (OtherWords.org)