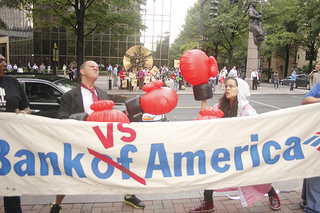 Where the Money Is

As foreclosures
Trim our ranks,
The biggest scoundrels
Are still the banks.

The nation’s big banks are making big profits again. Whew! I was a little worried there for a minute. During America’s recent financial meltdown we actually lost a few biggies, and plenty more nearly crashed on the rocks. Well, you can relax now…banks are rolling in clover once more. And they’re still steering the wheel of government.

Running the government has advantages. It assures that neither presidents nor Congress will advance laws bringing bankers to justice. Stern regulators? They will be neither appointed nor confirmed. It means that even egregious cases of bank fraud, corruption, and miscellaneous villainy won’t be prosecuted, even if they may get negotiated from time to time.

Thus, even when tycoons admit error and pay billions in fines, no one goes to jail. Fines have become merely a cost of doing business.

Yes, America’s banks have always been shady, even before that celebrated event when they were temporarily thrown out of the Temple. The big ones unleashed the crash of 1929 as well as the burst housing bubble that fueled the Great Recession.

Small banks, though, once gave the industry a good name. They managed our childhood nickels and dimes, paid interest, and loaned our parents money for cars and homes. They even gave out lollipops and toasters. It was a wonderful life.

Now, not so much. Small banks mostly bide their time until they can cash out to big ones. The big ones, in turn, have learned to make their killing on fees, leaning heavily on gouging the poor. The fine print is where their profits lie…late fees, overdrafts, small loan charges, and service fees of every description dominate the business.

And now even some state governments are playing their game by sending out tax refunds not as checks, but as debit cards. More fees aplenty for the bank while the state lays off the check writers.

Meanwhile at the global level, big banks play games in the stratosphere. In the LIBOR scandal, shaping up to be the biggest scam in history, several large banks were caught manipulating international interest rates.

A few chaps in England may actually do time. But none of our American guys will land in the slammer. We prefer not to arrest bankers. For all the crookedness in the securitized mortgage scandal, no one has yet been pinched. And a U.S. District Court judge in Manhattan ruled in late March in favor of the big banks. Her decision further decreased the odds that they’ll ever learn that rigging interest rates doesn’t pay.