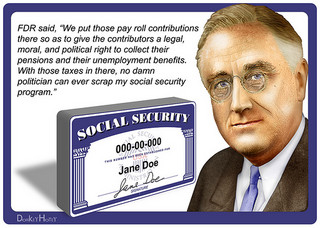 Where Would We Be Without Social Security?

Congress must ensure that the promise of Social Security and Medicare remains fully funded.
By Jo Comerford | June 26, 2013

Nearly every single American is intimately connected with the earned benefits of Social Security and Medicare — as either a contributor, a recipient, or both.

In fact, a recent national poll indicated nearly 90 percent of us favor taking strong measures to preserve the long-term stability of both programs. So a recent report released by the trustees of Social Security and Medicare may have caused you to take notice and provoked you to think about — or tell — your stories. Here are a few I’d like to share: 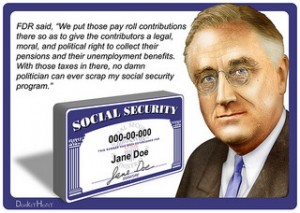 Melissa M. of Stinson Beach, California, talked about her father-in-law, 60 years old, working for low wages six or seven days each week for 40 years as a manager of a nearby cattle ranch. “The one thing that keeps him going is the letter he gets from the Social Security Administration,” she said. It “tells him how much he has earned in Social Security.”

Allen J. of Portland, Oregon, remarked that he was “a liver transplant survivor because of Medicare.” Martin L. of Cortland, New York, said he was born with a heart defect that required open-heart surgery to replace it. Without Medicare, Martin writes, he “would have no life and no future.”

Alton S. of Lakeland, Florida, was planting a citrus tree when he felt a pain in his lower abdomen. That night, an emergency room doctor told him he had a ruptured diverticulum. Alton remembers overhearing someone say, “We better get this guy to surgery or he’s dead meat.” A combination of his private insurance and Medicare paid for a series of successful surgeries. Looking back, Alton believes Medicare is one of the most “humane and caring arms of our government.”

With a 33-year career as a nurse, Janet P. of Cotati, California, noted that she worked to keep her “clients stable enough to stay out of the hospital.” Every time Medicare or Social Security policy changes, her clients’ lives are affected. Even as she hustles for others, Janet is aware that she needs to think about her own future.

“My savings was in my house, but I lost that,” she said. “I’m older now…getting back that nest egg gets harder and harder, and I’m not confident that either Social Security or Medicare will be there for me when I’m not able to work full-time.”

These are Melissa, Allen, Martin, Alton, and Janet’s stories. Like millions of their neighbors, Social Security and Medicare keep them going, offering them a humane and caring future.

Congress must take sound action to ensure that the promise of both these programs remains fully funded for coming generations. If our elected officials do nothing, after 2026, the government will be able to pay approximately 87 percent of projected Medicare costs and, after 2033, roughly 75 percent of anticipated Social Security benefits.

The trustees offer us a sobering reminder, not a crazed alarm as some fear. Luckily there are many smart actions Congress can take in response, starting with raising the payroll tax cap and fully implementing the Affordable Care Act. These actions are within our reach and would have a dramatic and positive impact on the well-being of both programs.

Our elected officials need to hear from all of us today. It’s our budget and our future. Let’s weigh in.

Jo Comerford is the executive director of the National Priorities Project. You can find these stories and more by visiting the NPP’s Faces of the Federal Budget website. NationalPriorities.org/us/
Distributed via OtherWords (OtherWords.org)