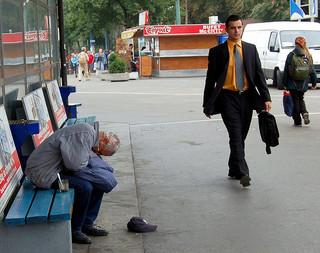 Where’s Joe the Plumber When You Need Him?

Four years ago, a chance encounter between Barack Obama and Samuel “Joe the Plumber” Wurzelbacher injected inequality right into the heart of the 2008 presidential race.

Obama explained to the then-unknown Wurzelbacher that “when you spread the wealth around, it’s good for everybody.” GOP nominee John McCain immediately jumped on Obama’s remark, suddenly making wealth redistribution one of that campaign’s hottest issues.

Joe the Plumber has since largely faded from view. He’s running a lackluster campaign for Congress as a conservative Republican. And the issue that lent him celebrity status has more or less disappeared. In the 2012 presidential debates, we’ve had not one mention of America’s incredibly top-heavy distribution of income and wealth.

President Obama, to be sure, has talked about taxing the rich back to Clinton-era levels. But those Clinton rates didn’t stop the concentrating of America’s wealth. Our rich have seen their fortunes soar for over three decades now. 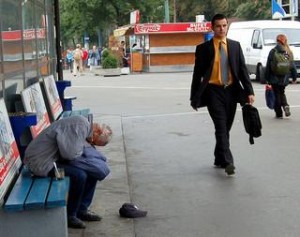 Among deep pockets worth at least $50 million, the U.S. global wealth dominance becomes even more pronounced. Of these 84,500 global super rich, 45 percent hail from the United States.

Joe the Plumber and other fans of great fortune don’t have much of a problem with this huge concentration of wealth. Should the rest of us? Would our lives be somewhat more secure if we did more in the United States to share the wealth?

The researchers at Credit Suisse have crunched all the numbers we need to answer this question. Three of today’s most important developed nations, their data show, turn out to have almost identical quantities of wealth per adult.

In real life, of course, we don’t divide wealth equally. Some of us have more wealth than others. But the degree of inequality, the new Credit Suisse data remind us, varies enormously among nations. In the United States, most wealth rests near the top. In France and Japan, much more wealth rests around the middle.

How much of a difference — to the typical person — do these differences in inequality make? A great deal. To be more specific: over $100,000 worth of difference.

In the grossly unequal United States, our most typical — median — adult now holds $38,786 worth of wealth. Half of American adults have more than $38,786, half have less.

Japan’s most typical adults have a net worth of $141,410. In France, a nation more equal than the United States but not as equal as Japan, the typical adult holds $81,274.

In other words, a typical Japanese household today sports more than triple the wealth of a typical U.S. household, and typical French households have twice as much.

Average Japanese or French people don’t work any harder than average people in the United States. They just live in societies that do a much better job of sharing the wealth that their work creates.

Maybe one day Americans will live in a society that shares. Maybe one day our presidential candidates will even talk about sharing.