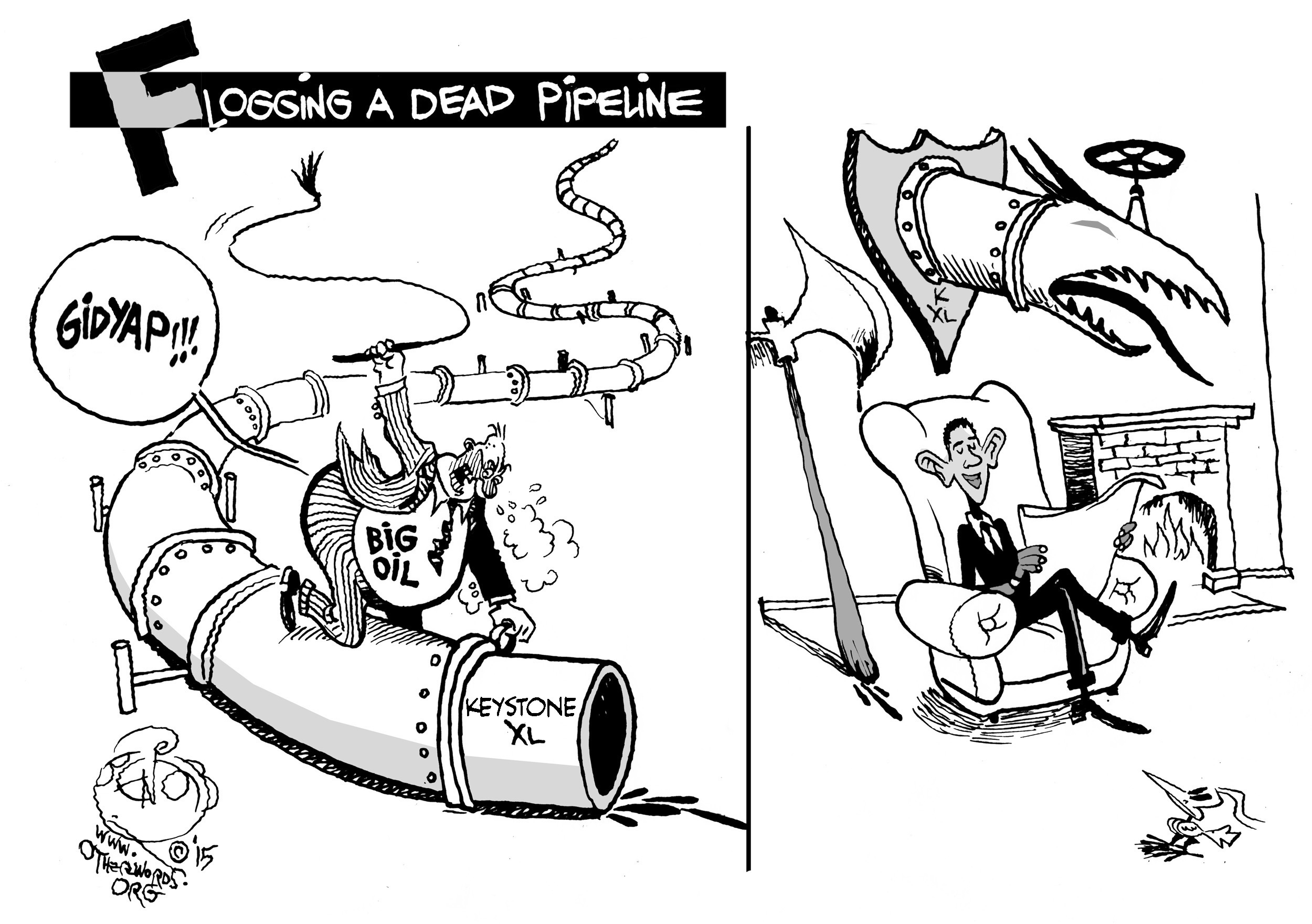 How a Pipeline Becomes a Trophy, an OtherWords cartoon by Khalil Bendib

Remember that scene in the Wizard of Oz when Dorothy hits a fork in the Yellow Brick Road? As she stands there stumped, a friendly character who will accompany her to the Emerald Palace pipes up.

“Pardon me, that way is a very nice way,” the Scarecrow advises as he points in one direction. “It’s pleasant down that way too,” he adds, now pointing in the other. Then the Scarecrow crosses his straw-stuffed arms and unhelpfully declares, “Of course people do go both ways.”

President Barack Obama’s climate leadership is as hard to follow as the Scarecrow’s directions.

After seven years of waffling, Obama finally rejected the Keystone XL pipeline. If completed, this conduit would have moved more than 800,000 barrels a day of filthy oil mined from the Canadian tar sands through Nebraska and five other states to refineries along the Gulf Coast. 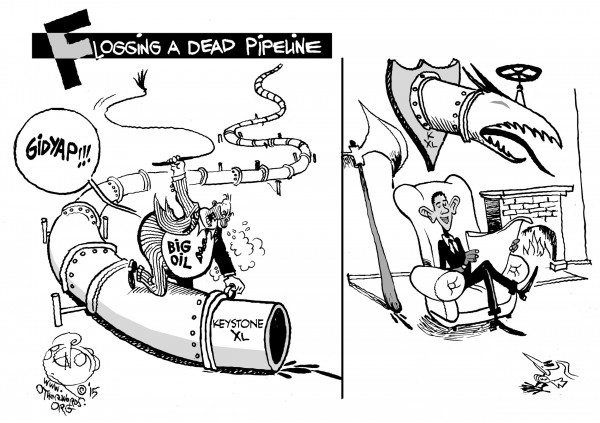 How a Pipeline Becomes a Trophy, an OtherWords cartoon by Khalil Bendib

Rejecting the $8 billion pipeline early in his first term would have been bold. But Obama dallied. He only stopped it once the thing made no financial sense because of low oil prices and similar infrastructure that rendered the project unnecessary. Making this move now, on the eve of global climate talks in Paris, was merely expedient.

He made his choice sound like a bigger deal than it was anyway.

“America is now a global leader when it comes to taking serious action to fight climate change,” he asserted. “And frankly, approving this project would have undercut that global leadership.”

So, what’s the state of that leadership?

On the one hand, the Obama administration has taken steps to reduce the nation’s reliance on oil, gas, and coal. Its Clean Power Plan will step up the ongoing retirement of coal-fired power plants as it cuts carbon pollution. The federal government is also phasing in higher fuel-efficiency standards while throwing some weight behind renewable-energy initiatives.

Fracking isn’t just dangerous for the people who live near the tapped oil and gas deposits: The heat-trapping pollution tied to natural gas isn’t limited to what happens in smokestacks. Extracting the stuff releases methane, which traps 34 times more heat than carbon dioxide over a century.

Obama seems blind to this conundrum.

“The natural gas boom has led to cleaner power and greater energy independence,” he asserted in his 2013 State of the Union address. “We need to encourage that.”

Nearly three years later, the federal government is supporting the export of natural gas from the East, West, and Gulf coasts. Shipping this fossil fuel overseas will increase production and hike domestic prices for the fuel at the same time.

And while Obama was posing as a climate activist by belatedly ditching the Keystone XL pipeline, real activists were finally reading the official text of the Trans-Pacific Partnership. This trade and investment deal, which would force U.S. authorities to automatically approve natural gas exports from our shores, has the White House’s firm support.

There’s no shortcut on the road that leads away from climate chaos and toward a more sustainably powered economy. Brain or no brain, even the Scarecrow from the Wizard of Oz could tell you that burning more oil, gas, and coal won’t get you there. He knows how dangerous it is to play with fire.

Columnist Emily Schwartz Greco is the managing editor of OtherWords, a non-profit national editorial service run by the Institute for Policy Studies. OtherWords.org