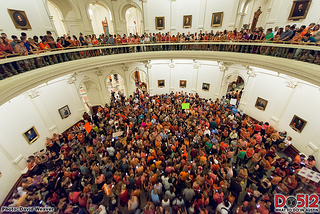 The People ‘Hijack’ Democracy in Austin

How embarrassing for those Texan political "leaders" to have had their repressive, extremist, and dangerous anti-choice legislation derailed by, well, women.
By Jim Hightower | July 9, 2013

Who should make medical decisions about pregnancies? Women? Their doctors? Their ministers?

The macho Republican autocrats and theocrats who control the Texas state government say they are the ones to decide such deeply personal matters. 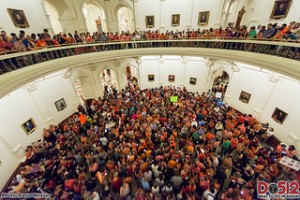 How embarrassing for these political bullies, then, to have had their repressive, extremist, and dangerous anti-choice legislation derailed by, well, women.

Some 2,000 of them recently flooded into the Capitol building to support Texas State Senator Wendy Davis, who mounted an 11-hour filibuster against the GOP’s scheme. The crowd, comprised mostly of of women, shouted down the “leaders” when they tried to rig the rules to silence Davis and ram their bill into law.

The women’s outcry startled Gov. Rick “Oops” Perry, who later whimpered that the people’s assertion of citizen’s authority was a “hijacking of the democratic process.” What an odd concept — the people “hijacking” democracy.

Odder yet is that these same Republicans once tried to hijack Davis’s district by gerrymandering most of her minority voters into another district. And now Perry is trying to hijack reality, huffing and puffing that he’ll slap down the women’s opposition to his assault on their rights, because that’s “what the people of this state hired us to do.”

Get a grip, Rick.

In a June poll, 74 percent of Texas voters (including six out of 10 Republicans) say such personal medical decisions should be made by women and their doctors, not by political quacks masquerading as Talibanic moral autocrats.