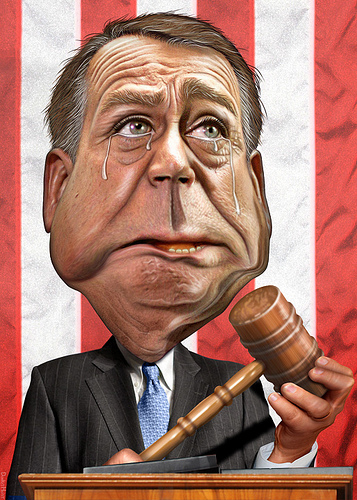 Republican politicians have been obsessed with impeaching President Obama for years.
By Jim Hightower | August 6, 2014

Surely you thought that partisan posturing by far-right Congress critters couldn’t get any nuttier. But here comes the GOP’s claim that all the talk about impeaching President Barack Obama is being led by…Barack Obama!

Having discovered that the larger public is appalled that his party would even consider wasting time on such extremist nonsense, House Speaker John Boehner tried to do a political back flip. 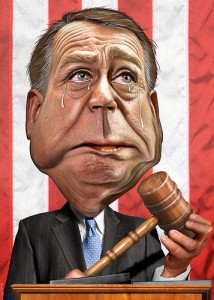 Impeachment talk, he fumed, is “a scam started by the Democrats at the White House.” No Republican lawmakers, the Ohio Republican barked to the media, are even discussing it.

Boehner, Boehner, Boehner — did you not hear Rep. Steve Scalise of Louisiana, the new No. 3 on your own GOP leadership team, tell Fox News that he refuses to rule out impeachment?

Or Rep. Kerry Bentivolio of Michigan, when he exulted that “it would be a dream come true” to impeach Obama? Or that he has pursued advice on how to proceed?

How about Rep. Randy Weber of Texas, who put it unequivocally: “The President deserves to be impeached, plain and simple.” And Georgia’s Rep. Jack Kingston confirmed that: “Not a day goes by when people don’t talk to us about impeachment.”

Still, Boehner received some backup on his dubious disclaimer from Glenn Beck. The tea-partying radio ranter echoed the speaker’s ridiculous assertion that no one in the GOP has given a moment’s thought to impeachment.

“Have you spoken to one person (pushing such an idea),” Beck demanded in a recent broadcast. “No one” has used the I-word, he snapped. But, in fact, Beck does know one person who has: Himself. Also, Sarah Palin. And at least a dozen others.

Put away all hope for honesty or seriousness, ye who enter the nut house presently known as Boehner’s House of Representatives.