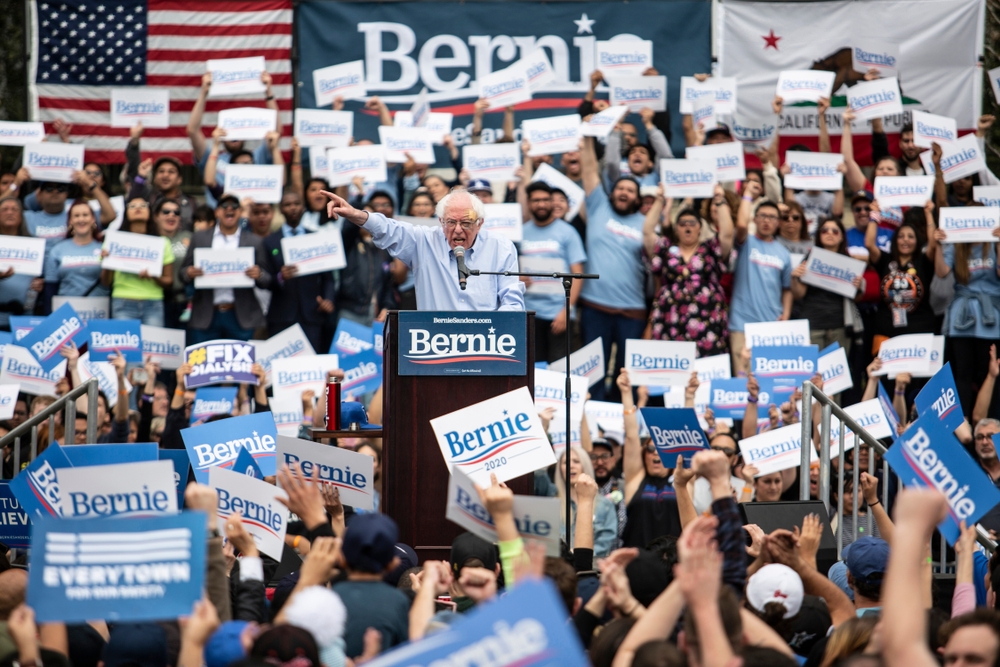 Americans were taught to associate “socialism” with dictatorship and “capitalism” with democracy. Are those days over?
By Peter Certo | February 12, 2020

For decades, Republicans have painted anyone left of Barry Goldwater as a “socialist.” Why? Because for a generation raised on the Cold War, “socialist” just seemed like a damaging label.

And, probably, it was.

You can tell, because many liberal-leaning figures internalized that fear. When Donald Trump vowed that “America will never be a socialist country,” for instance, no less than Senator Elizabeth Warren stood and applauded.

But while older Americans retain some antipathy toward the word, folks raised in the age of “late capitalism” don’t. In Gallup polls, more millennial and Gen-Z respondents say they view “socialism” positively with each passing year, while their opinion of “capitalism” tumbles ever downward.

As a result, it’s not all that surprising that self-described democratic socialist Senator Bernie Sanders tops Trump in most head to head polls and is now flirting with front-runner status in the Democratic primary.

Still, old propaganda dies hard. What else could explain the panicky musings of Chis Matthews, the liberal-ish MSNBC host, who recently wondered aloud if a Sanders victory would mean “executions in Central Park”?

Nevermind that Sanders is a longtime opponent of all executions, as any news host could surely look up. The real issue is a prejudice, particularly among Americans reared on fears of the Soviet Union and Maoist China, that “socialism” implies dictatorship, while “capitalism” presumes democracy.

Yes, it’s easy to name calamitous dictatorships, living and deceased, that proclaim socialist or communist commitments. But it’s just as easy to point to Europe, where democratic socialist parties and their descendants have been mainstream players in democratic politics for a century or longer.

The health care, welfare, and tax systems built by those parties have created societies with far greater equality, higher social mobility, and better health outcomes (at lower cost) than we enjoy here. These systems aren’t perfect, but to a significant degree they’re more democratic than our own.

But we don’t have to look abroad (or to Vermont) for a rich social democratic history.

Milwaukee mayor Daniel Hoan — one of several socialists to govern the city — served for 24 years, and built the country’s first public busing and housing programs. And ruby-red North Dakota is, even now, the only state in the country with a state-owned bank, thanks to a socialist-led government in the early 20th century. Today, dozens of elected socialists hold office at the state or municipal levels.

While plenty of socialists embraced democracy, plenty of capitalists turned to dictatorship.

In the name of fighting socialism during the Cold War, the U.S. trained and supported members of right-wing death squads in El Salvador, genocidal army units in Guatemala, and a Chilean military regime that disappeared or tortured tens of thousands of people while enacting “pro-market reforms.”

Only last year, the U.S. government was cheering a military coup against an elected socialist government in Bolivia. And in 2018, the Wall Street Journal praised far-right Brazilian leader Jair Bolsonaro, an apologist for the country’s old military regime, for his deregulation of business.

Even here at home, our capitalist “freedoms” have coexisted peacefully with racial apartheid, the world’s largest prison system, and the mass internment of immigrants and their children.

Sanders has been clear his socialist tradition comes from the social democratic systems common in countries like Denmark, with their provisions for universal health care and free college.

Should Matthews next wonder aloud if candidates who oppose Medicare for All or free college also support death squads, genocide, mass incarceration, or internment camps? If that sounds unfair, then so should the lazy fear mongering we get about “socialism.”

The sobering truth is that all political systems are capable of either great violence or social uplift. That’s why we need resilient social movements, whatever system we use — and why we’re poorly served by propaganda from any corner.