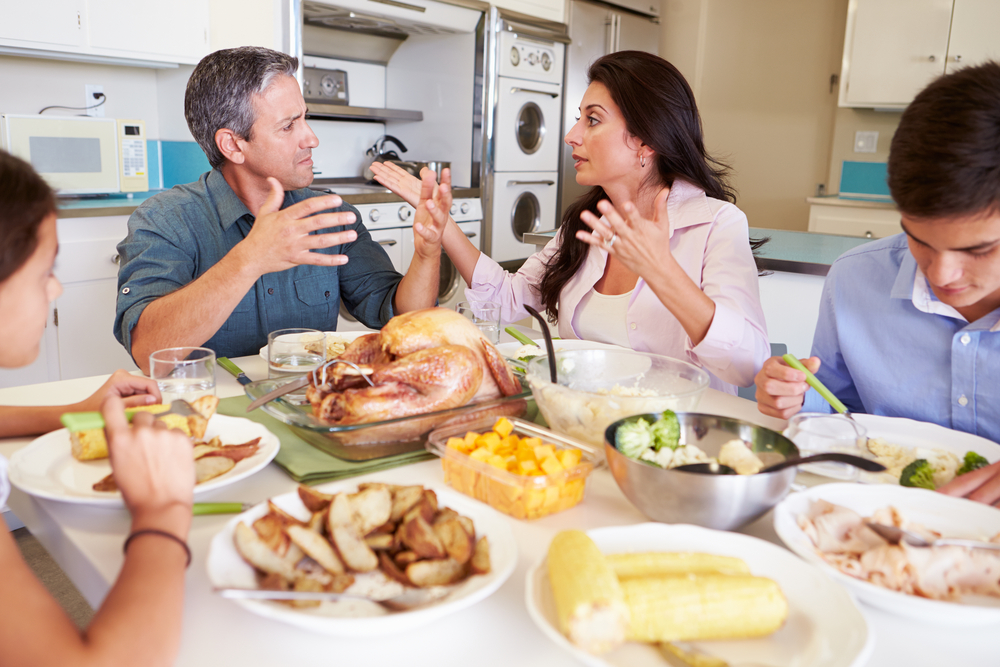 Why Holiday-Season Arguments with Relatives Are So Frustrating

Most of us think if everyone just knew the facts, they'd agree with us. Unfortunately, it doesn't work that way.
By Jill Richardson | November 14, 2018

The weather has turned cool and crisp (or so I’ve heard… I’m in California, where it’s hot out and everything’s on fire). We’ve entered the time of year when soon we’ll get together with our loved ones, share a traditional holiday meal, and bicker over politics.

There are two major fallacies that prevent Americans on both sides of the political aisle from understanding one another.

The first is the assumption: “If you knew what I knew, you would believe what I believe.”

I hear this on both sides: If the other side just knew what we knew. If they knew the planet was warming, if they knew about all the plastic in the Pacific Ocean, if they knew we’ve been working hard for decades and still haven’t gotten ahead…

Often a debate will focus on adjudicating the facts. What percentage of scientists believes in human-caused catastrophic climate change? Or what are the scientific arguments for and against genetically engineered crops?

The problem is that the debate, at its core, is often not over facts. The two sides have different values and different identities. Our values and our political positions tie us to the groups we identify with.

For one thing, our differing values will lead us to different positions no matter what the facts are.

If I value a multicultural American that welcomes immigrants from all over the world, and you believe America is a white nation and non-white immigrants are changing its character in an unacceptable way, we’re not going to agree about immigration. The facts won’t matter.

Each of us identifies with groups that share these values. Asking a Trump supporter to denounce Trump’s policies or Trump himself is also asking that person to give up a part of their identity. It’s asking them to give up their membership in a group.

The same can be said of membership in other groups, including Hillary or Bernie supporters. All people resist taking in facts that jeopardize our membership in groups we identify with.

The truth is that we often have no idea how other people live in this country. This is particularly true of people who are members of dominant or more privileged groups: wealthy people, white people, men, heterosexuals, able-bodied people, and so on.

The effects of privilege are more obvious when you don’t have it. As a white woman, when I get pulled over by a cop, I’m bummed out, but not scared for my life. Usually I have an amicable exchange with the cop even if I get a warning or a ticket.

I might assume that all people are treated so respectfully by cops. I might think that if a person of color was shot by the police, he or she must have been doing something wrong. Surely, the police did not act improperly. I’ve never seen a cop act improperly.

It’s only when I accept that my life as a white woman in America tells me very little about what it means to be a person of color in America that I can begin listening and learning.

That willingness to listen and learn from one another is needed on all sides. Each of us can begin to accept that our experiences in this country aren’t universal, which is a much bigger step toward agreeing on the facts than just looking at the same data.