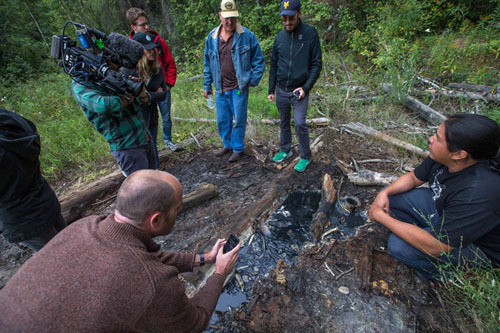 Why I’m Marching for Climate Action

I’ve long known how wasteful, destructive, and dangerous the process of extracting oil from tar sands is. You have to dig up four tons of dirt and rock to get one barrel of oil. Beautiful old-growth boreal forest becomes a wasteland.

And that single barrel of oil? It creates three times as much climate pollution as producing a barrel of conventional crude. 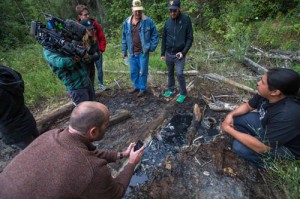 That’s why I was willing to go to jail for protesting the Keystone XL pipeline. But comprehending the brutal reality of tar sands mining requires seeing it firsthand.

I spent four days this summer in Alberta, Canada, with filmmaker Darren Aronofsky and First Nations leaders. We met with officials from Suncor Energy, one of the companies most involved in extracting tar sands, and walked through the dismal wreckage of what the company calls a “reclaimed” area.

We took a tour of the massive open-pit mines that spread across the landscape. We also visited with leaders from the Athabasca Chipewyan and Mikisew Cree First Nations. The immediate environmental consequences of tar sands extraction have devastated those communities.

The tar sands are the most outsized example I can imagine of misspent energy and ingenuity. About a fifth of tar sands oil is extracted using open-pit mines — some of the largest strip mines on Earth. But the other four-fifths of the oil is extracted with an even more dangerous process.

Natural gas, which you can think of as clean energy’s antithesis, gets piped in. The oil companies then burn that fuel to generate steam to liquefy and extract the bitumen. The bitumen then gets separated and “upgraded” using massive amounts of water and, frequently, toxic chemicals.

As part of this process, the boreal forest is fragmented, cut down, or completely obliterated. And all of this happens before the bitumen is diluted (more toxic chemicals) and then piped under high heat and intense pressure up to a thousand miles or more to where it’s refined and funneled into our cars and trucks.

Watching all this, I contemplated how much could be achieved if all of this effort, ingenuity, and engineering prowess were instead directed toward developing clean power? Why go to so much trouble to do something so difficult and so destructive when you could invest the same effort into something positive that can literally save the world and power it?

That’s why it’s so important that, as a society, we increase the pressure on our leaders to take action right now to advance clean energy solutions and resist the temptation to drill, mine, and frack as if there were no consequences and no tomorrow.

And that’s why I’ll march along with thousands of Sierra Club members and so many others in New York City on September 21.

The People’s Climate March will be the biggest demonstration of its kind in U.S. history. The march will include a group of people affected by tar sands at every stage — from the First Nations communities who live in that boreal forest to the folks who reside near the refineries in the south and along the pipelines and train routes in between.

Together, we’ll call on President Barack Obama and other world leaders to take more significant action to curb carbon pollution.

After all, there are alternatives. A new economy powered by clean energy is already taking shape. It’s creating more long-term jobs than pipeline construction or the strip-mining of forests for oil. People across the world are retiring coal-fired power plants, switching to wind and solar energy, and improving fuel efficiency.

These changes aren’t happening fast enough, nor at the scale that we need — yet — but momentum is building. Every day, smart people are coming up with new ideas and innovations. But just think about what we’ll accomplish once our civilization commits all of its genius to making this transformation happen and stops working overtime to prolong the use of fossil fuels.

Forget about “if we can put a man on the moon” analogies. Any society that can conceive of and execute something as recklessly ambitious as mining Alberta’s tar sands should find the transformation to a clean energy economy a walk in the park.

Michael Brune is the executive director of the Sierra Club, the largest grassroots environmental organization in the United States. SierraClub.orgDistributed via OtherWords (OtherWords.org)