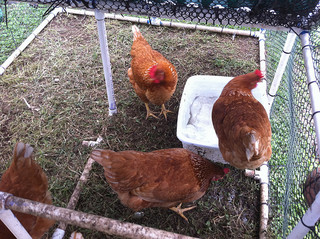 Why I’m a Chick with Chicks

As a visit to my Cluckingham Palace coop proves, small-scale chicken raising is compatible with modern city life.
By Jill Richardson | March 27, 2013

In the span of a few years, I’ve gone from weird to trendy. Why? I keep chickens — in San Diego.

In 2009, the local newspaper’s editorial page excoriated me for trying to change local laws to allow chickens. Last year, the same paper featured me (along with my hen Diana) in a cheery lifestyle feature article on urban farming.

And you know what? Thousands of birds kept together in a small space are smelly and don’t belong in a city. And roosters are noisy. But hens don’t need roosters in order to lay eggs, and a family doesn’t need more than a few hens to provide enough of them. Plus, a few hens are much quieter than your average Chihuahua.

Several years back, I stirred up a local controversy to see if I could get my city’s chicken laws changed. A reporter for the local news showed up at my house to do a story on the matter. After seeing my chicken coop — Cluckingham Palace — and meeting my “royal” ladies, Diana, Victoria, and Elizabeth, she made a confession.

When she arrived, she expected to find a smelly coop that attracted bugs. But she found an odorless, bug-free coop with lively, sweet chickens that provide me with pest and weed control, and eggs. They were surrounded by a thriving garden, fertilized by my chickens’ manure.

I’ve gone months without cleaning the chicken coop and it never smelled or attracted bugs. So long as you add enough bedding (I favor wood chips and dead leaves) to the coop, the chickens’ manure breaks down into compost. It will never smell. As for the bugs: What? Chickens eat bugs. Any bug dumb enough to make its home in a chicken coop won’t last long. (Ditto for mice.)

After eating the fresh eggs laid by backyard chickens, you won’t be able to return to the store-bought kind. Even the expensive, fancy varieties (organic, cage-free, etc.) don’t compare with backyard chicken eggs. I think the difference comes from the chickens’ diet. Backyard hens eat chicken feed, of course, but they also forage for grass, bugs, and even the occasional lizard.

A Mother Earth News study found that eggs from chickens raised on pasture contain less cholesterol and saturated fat than store-bought eggs, along with more omega-3s and vitamins A, D, and E. In short, backyard chicken eggs can hardly be considered the same product as what’s found in the supermarket.

Perhaps this is why San Diego’s recent effort to legalize backyard chickens was funded by a grant for combating obesity.

When I first got my chickens, I was on the wrong side of the law. I felt it was an act of civil disobedience, as I was taking a stand for my family’s health, the environment, and animal welfare. Pampered backyard hens, after all, have it good compared to their caged factory farmed counterparts.

Just a few years later, backyard hens are legal in more cities. When my parents met my feathered pets, they commented that I’m “just like Martha Stewart!” Maybe, but that’s probably the only thing we have in common.

It’s great to see the tide changing. Herbert Hoover once promised Americans “a chicken in every pot.” That didn’t turn out so well for him. But a chicken flock in every yard could prove a winning goal if Michelle Obama wants to take her healthy-eating campaign to the next step.