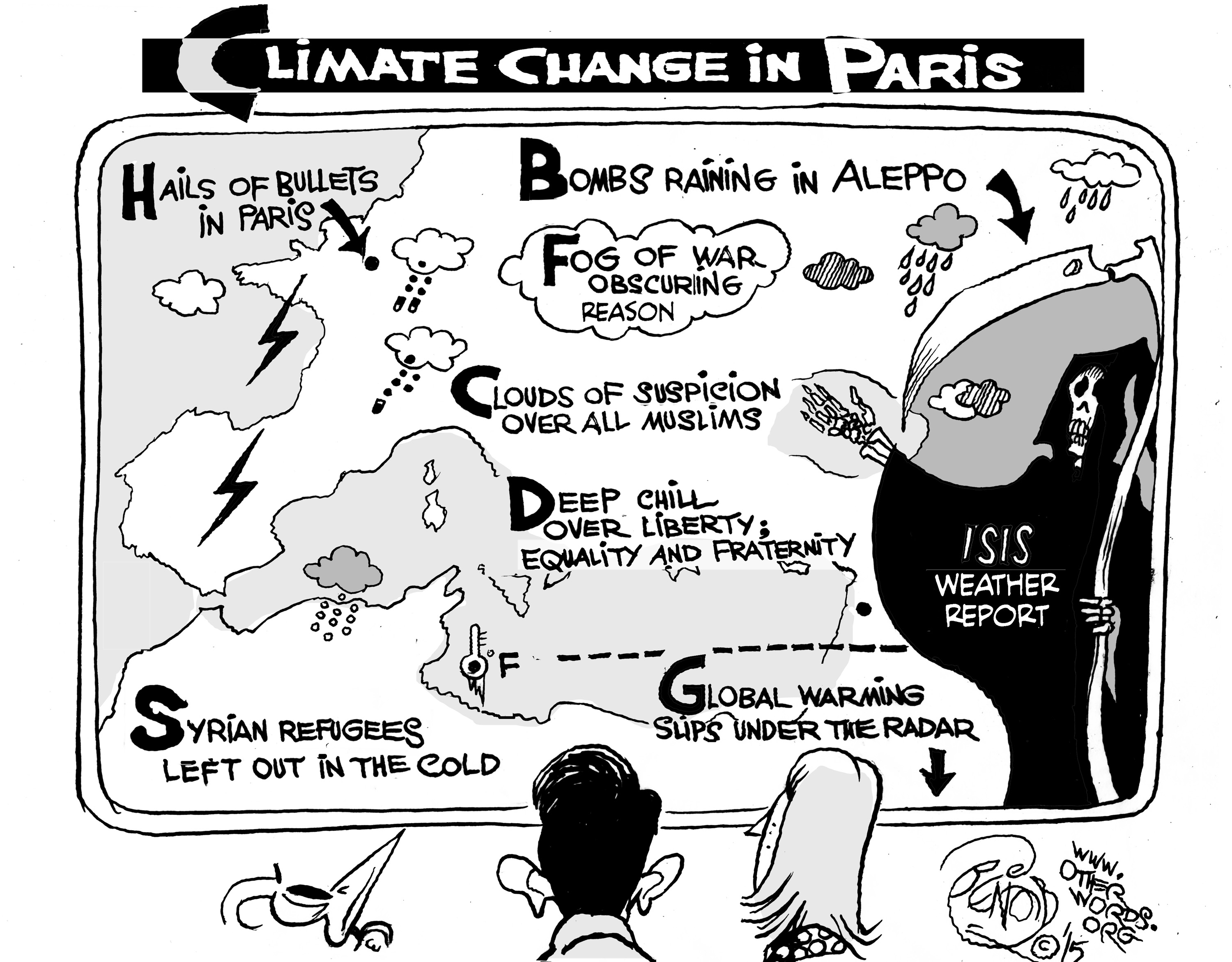 Climate Change in Paris, an OtherWords cartoon by Khalil Bendib

Why Justin Trudeau Makes Me Jealous of Canada

Asked why half the members of his cabinet are women, Justin Trudeau replied with three words that spoke volumes: “Because it’s 2015.”

The nurturing father of three kids under 10 is a master of effortless statements that spread inclusiveness and tolerance. Four Sikhs will serve in the new cabinet that Trudeau boasts “looks like Canada.” And he calls himself a “proud feminist.”

Once he became prime minister in early November, a year-old snapshot of Trudeau went viral. It showed him with Scott Brison — another member of Canada’s diverse cabinet — alongside Brison’s husband and their twin daughters. By grinning while holding one of the men’s baby girls aloft, Trudeau expressed solidarity with same-sex parents. 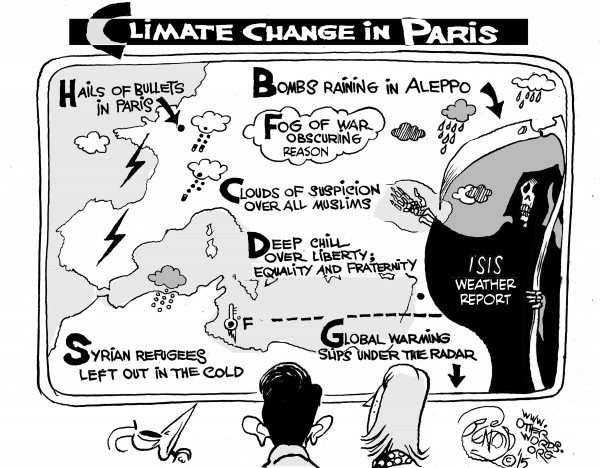 Climate Change in Paris, an OtherWords cartoon by Khalil Bendib

He’s quickly sweeping away ill will sowed by his predecessor — the arch-conservative Stephen Harper — both at home and abroad. Mindful of current events, Trudeau has beefed up Canada’s role in the global climate talks that will soon begin in Paris. He’s also taking the high road on Syria’s refugee crisis.

After the Parisian terrorist attacks made these issues collide, Trudeau stood by his campaign promise to welcome 25,000 Syrian refugees by January 1. That’s more than 11 times the number of Syrian refugees the United States has admitted since the country sank into conflict four years ago.

Having shrugged off President Barack Obama’s decision to block the Keystone XL pipeline, which would have funneled oil mined from Canada’s tar sands through the United States, Trudeau banned crude oil tanker traffic along British Columbia’s north coast. The move essentially killed another proposed pipeline that would have made it easier to export tar sands oil.

As remarks by U.S. presidential contenders about climate change and the Middle Eastern upheaval make painfully clear, Canada’s prime minister towers over them all when it comes to polish and poise.

Take Donald Trump. (Please.) Amid a crude rant before a live audience in Fort Dodge, Iowa, the Republican hopeful declared his position regarding the Islamic State. “We should bomb the (bleep) out of them.”

How prophetic. The French government, led by more eloquent people, is taking care of that. Trump (irony alert) also advocates shuttering mosques “where hate is preached.”

Then there’s Marco Rubio. The Florida senator, whose good looks and youth theoretically puts in him in Trudeau’s league, had previously supported some Syrian refugee resettlement.

But Rubio backpedaled after the Paris attacks. Most Republican presidential candidates had already wanted to lock out Syrian refugees, heartlessly presuming that some of these folks fleeing violence would be undercover violent extremists.

Now the entire field is taking that stance — although some of them want to make an exception for Christian Syrians, even if Jesus would surely object.

Rand Paul is going further out on that limb. He’s got a bill that would suspend refugee admittance from any country with “a high risk of terrorism.”

The Democratic hopefuls have more nuanced things to say about climate change, terrorism, and refugees. Although during their latest debate Hillary Clinton blurted out that she’s “from the ‘60s” and Sanders referenced the top tax rate that prevailed during the Eisenhower years for context, they do get that it’s 2015.

But given their lack of Trudeau’s sparkle and grace, it’s hard not to be jealous of Canada.