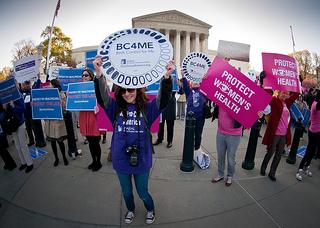 The Supreme Court's decision to uphold the health care mandate may not stop the war on women, but it surely feels good to win such a decisive battle.
By Martha Burk | July 9, 2012

The unprecedented attack on women’s health hit a roadblock on June 27, when the Supreme Court ruled in favor of the Affordable Care Act’s individual mandate, effectively upholding the entire law. It was a big win for women.

In upholding Obama’s landmark health care reform, the Roberts Court threw a hand grenade at the conservatives waging an unrelenting “war on women” that uses access to health care as its main battering ram. The decision may not stop the war, but it surely feels good to win such a decisive battle.

The law, which benefits virtually all Americans, scored these big wins for women:

Reproductive Care: Birth control will be covered as a preventative measure without co-pays. Yes, the U.S. Conference of Catholic Bishops will continue their assault on this basic service, but they’re now less likely to prevail. Other very important but less divisive preventative services like pap smears, mammograms, and domestic violence screenings must also be covered without co-pays. 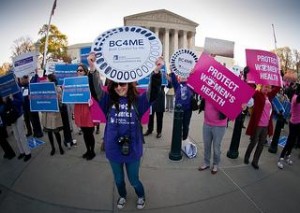 Motherhood: Maternity coverage will now be mandated. A widespread myth about health coverage has been that maternity coverage is generally available — it just costs more. A corollary myth is that women’s coverage costs more because of maternity coverage. Not so. According to the National Women’s Law Center, almost 90 percent of independent market-share policies exclude maternity coverage altogether. They don’t provide it at any cost. Nursing mothers who work for large employers will also benefit, as they will now be able to have breaks and a private place to pump breast milk.

Equality: Flat-out sex discrimination in coverage and pricing will no longer be allowed. The Affordable Care Act prohibits the widespread practice of charging women higher premiums than they charge men of the same age for the same coverage. This is known as “gender rating,” and the usual excuse is that women are more likely to get check-ups. The law makes any kind of sex discrimination in plans that get federal support a no-no, including policies in the new insurance exchanges.

The one place women may lose out is in expanded Medicaid coverage, since the Court’s decision said the Feds can’t threaten to take away existing Medicaid funding (which primarily benefits women and children) if states refuse to expand their Medicaid programs.

Still, the Supreme Court handed women a huge victory. In a continuing war with no end in sight, it’s a welcome one.

Martha Burk is the director of the Corporate Accountability Project for the National Council of Women’s Organizations (NCWO) and the author of the book Your Voice, Your Vote: The Savvy Woman’s Guide to Power, Politics, and the Change We Need. An earlier version of this op-ed appeared on the Huffington Post. Follow Martha on twitter @MarthaBurk.
Distributed via OtherWords (OtherWords.org)