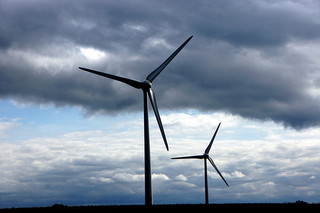 Will Congress Blow This Chance to Propel Green Jobs?

The wind industry's robust job growth has been dogged by a boom and bust cycle that parallels the extension and expiration of the Production Tax Credit.
By Sam Catherman | October 30, 2013

Are you tired of the political brinksmanship, eleventh-hour deals, and avoidable financial crises that characterize business as usual in Congress?

So is the wind energy industry.

Once again, one of the few mechanisms in the tax code designed to reward clean-energy producers faces a looming deadline. If Congress fails to renew a program called the Production Tax Credit before it expires on Dec 31, the wind industry and millions of American workers will suffer.

The Production Tax Credit provides companies a 2.2-cent per kilowatt hour tax credit for the first 10 years of a renewable energy facility’s operation. It’s been jeopardized before. At the end of 2012, Congress almost let the program expire, only to extend it at the last minute as part of the New Year’s Day “fiscal cliff” deal. But last-minute saves and short-term extensions curb the expansion of clean energy across the United States.

Wind farms require 18 to 24 months for project planning. North American Wind Power reports that last year’s delay and the short lifespan of this extension resulted in only 1.6 MW of wind power installed in the first six months of 2013 — the capacity equivalent of one turbine. Uncertainty continues to spook the industry as the credit nears expiration yet again.

Opponents of wind-energy tax credits like the Club for Growth, American Conservative Union, and Citizens Against Government Waste, argue that the wind industry doesn’t need a boost because the market will decide whether there’s ample demand for its expansion. Rep. James Lankford (R-OK), chairman of the House Subcommittee on Energy Policy, argues that “the facts state that wind power has been steadily increasing over the last 10 years, and there’s this point of saying when does wind take off on its own?”

Well, what about oil and gas companies? They pocket massive subsidies, estimated at between $10 and $52 billion each year, despite the many problems with fossil fuels, such as pollution and climate change. Oil companies like ExxonMobil collect record profits quarter after quarter, and the top five oil companies reported a combined $118 billion in profits in 2012.

The wind industry’s robust job growth has been dogged by a boom and bust cycle that parallels the extension and expiration of the Production Tax Credit. Companies add jobs when the credit is in place, and hold off on hiring or lay workers off when its end date nears. Over the past 21 years, the credit expired in 1999, 2001, and 2003. With each expiration, installation of new wind capacity fell by no less than 76 percent. When the credit was reissued, wind production jumped back to pre-expiration levels.

Wind producers rely on this incentive to make their vision of affordable, renewable, non-polluting power a reality. The credit’s extension would encourage further investment in clean energy projects, reduce greenhouse gas emissions, and create jobs that allow hard-working Americans to lead the world into the future of energy production.

Congress needs to prolong the Production Tax Credit for a longer period. Extending it for a decade or more would incubate thousands of green jobs and level the playing field with heavily subsidized fossil fuels.