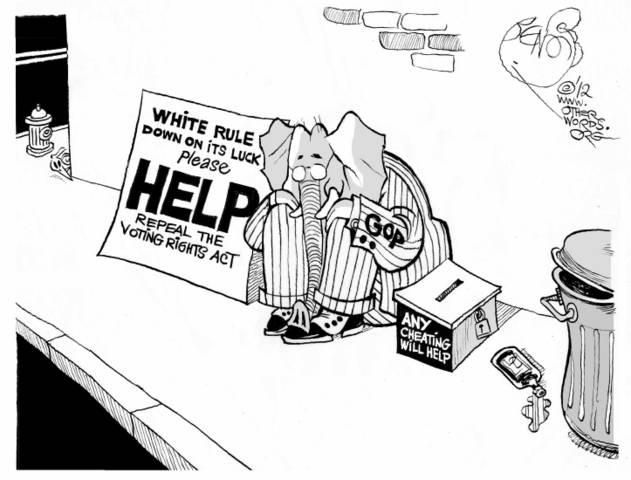 Will the Supreme Court Dismantle the Voting Rights Act?

Widespread efforts to suppress voting by people of color and the poor through a rash of voter ID laws make it clear that we still need the landmark 1965 legislation today.
By Raul A. Reyes | November 21, 2012

Well, that didn’t take long. Just three days after a diverse coalition of voters re-elected President Barack Obama, the Supreme Court announced that it’s going to review the Voting Rights Act. The justices will look at Section 5 of the landmark legislation, which requires states with a history of racial discrimination to get pre-approval from the federal government before they change their voting laws. Most of the affected states are in the South.

In Shelby County v. Holder, the Court will consider whether Section 5 is unconstitutional. Shelby County, Alabama says it is, and that the preclearance requirement is unnecessary and unfair.

Shelby County is wrong on all counts. The bigger problem is that the Supreme Court seems poised to meddle in public policy, which is bad for its reputation and for our democracy. 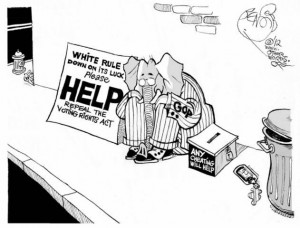 We only have to look at the 2012 elections to see why Section 5 remains vital today. The federal government used it to fight efforts to curb early voting in Florida, and to challenge Voter ID laws in South Carolina and Texas. These laws could have disenfranchised thousands of minority voters. Section 5 was also used to invalidate Texas’ redistricting plan, which was found to discriminate against Latinos.

Shelby County says that Section 5 is outdated because the political climate in the South has improved. But voter suppression continues to be an issue throughout the South. Since 2010, eight southern states have passed restrictive voting laws. These measures make it harder for minority and low-income voters to cast their ballots. That gets at the heart of why Section 5 is still vital: to guarantee that voters are not denied access to the polls.

Opponents of Section 5 say that it is unfair. They say it’s a burden for southern states to have to seek federal review whenever they change their election laws. Yet history can’t be erased. These states earned the preclearance requirement with their legacy of racial discrimination. And if their proposed changes to election laws don’t discriminate against minority voters, then the federal pre-approval requirement should not be a burden at all.

Congress has been clear that it supports the entire Voting Rights Act. Though Section 5 was originally supposed to last five years, our lawmakers have renewed it four times. In 2006, Congress renewed it for 25 years after 22 hearings and 15,000 pages of evidence established persistent racial discrimination in the South.

The Fifteenth Amendment assigns Congress — not the Supreme Court — the responsibility of ensuring that no citizens are denied their right to vote. Section 5 has faced at least two constitutional challenges in the past, and survived both of them. Two lower courts have already ruled against Shelby County. Why then, is the Supreme Court hearing this case?

Unfortunately, it appears as though the Court may be leaning towards misguided judicial activism. Chief Justice John Roberts has indicated that he may find Section 5 anachronistic. “Things have changed in the South,” he wrote in a 2009 opinion that touched on a similar issue.

However, “things” haven’t changed that much. The Constitution, Congress, and recent events support upholding Section 5. It’s an important barrier against voter suppression, and the court risks damaging its reputation as an impartial arbiter of justice if it tinkers with the act.

And it’s not just a problem in the South. Pennsylvania’s House Majority Leader Mike Turzai, a Republican, bragged earlier this year that the state’s new voter ID law “is gonna allow Governor Romney to win the state of Pennsylvania.”

A judge later ruled that Pennsylvania couldn’t enforce its new voter ID law in 2012 but he didn’t stop the state from running ads suggesting that it would be in effect anyway. Though Mitt Romney ultimately lost Pennsylvania, it’s worrisome that the Supreme Court might soon wade into this legislative territory. The civil rights of millions of minority voters are at stake, as well as the integrity of our electoral process. The Court should leave Section 5 intact.