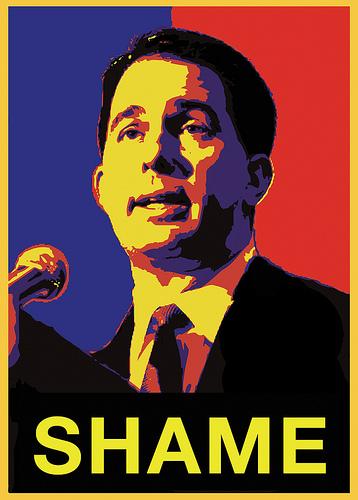 “Scott Walker Wins Wisconsin,” screamed headlines across the country after the labor-bashing incumbent governor hung onto his job in the June 5 recall election.

Well, yes…but no. Walker will get to stay in office for the rest of his term, but he didn’t win the election — money did. This was a victory for the Citizens United edict issued two years ago by the Supreme Court’s five-man corporatist majority. This anti-democratic ruling opened the door for unlimited sums of corporate cash to barge into our national, state, and local elections and take charge. Walker is the first ugly sprouting of that alien seed. 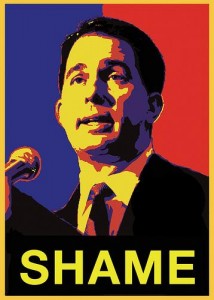 He sacked up some $30 million from corporate interests — nearly eight times the money that his Democratic opponent had to spend. Two-thirds of Walker’s stockpile came from out of state. Bob Perry, an anti-labor, anti-government Texas tycoon, sank more than half-a-million bucks into his Wisconsin soul mate’s campaign. Likewise, the far-right DeVos family pitched in with a quarter-million dollars from its Amway fortune. So did Las Vegas casino baron Sheldon Adelson, the guy who bankrolled Newt Gingrich’s failed presidential bid.

Then came the insidious, secretive, “outside” campaigns that the Supremes green-lighted. Citizens United allowed corporations to dump mountains of their cash into elections. The multibillionaire, laissez-fairyland Koch brothers, for example, shoved at least $3 million behind Walker — practically all of which went to negative attacks against his opponent.

Some “victory.” Honest conservatives might take cheer that Walker still clings to the governor’s chair, but there can be no joy in the fact that money rules. That’s the lesson of this election. And that’s the real fight. To join it, go to Public Citizen’s grassroots rebellion: www.democracyisforpeople.org.