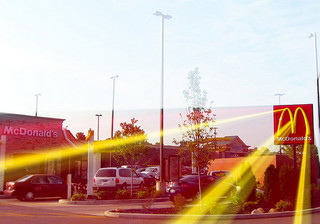 You Won’t Love These McSubsidies

Taxpayers will shell out $1.2 billion this year to support workers subjected to McDonald's miserly wages and benefits.
By Jim Hightower | October 30, 2013

Let us all now bow before the god of free enterprise, whose awesomeness was revealed in a recent news release announcing that the divine managers of fast-food deity McDonald’s achieved a profit of $1.5 billion in just three months this summer.

Holy Big Mac! How does Mickey D’s do that? Peek behind the curtain and you’ll see that the secret power that McDonald wields is thee and me — America’s taxpayers.

The corporation rips off its huge workforce by paying poverty wages and no benefits, then directs the workers to the food stamp office and other government-funded safety-net programs.

Neat, huh? A major chunk of the chain’s cost-of-doing-business disappears from the corporate books and — shazam — reappears on the government’s books. In fact, the National Employment Law Project reports that McDonald’s’ phenomenal profits are bloated by an estimated $1.2 billion that we taxpayers will shell out this year to support its predatory wage-and-benefit policy.

But the golden arches are not alone in this fast-food flimflam. Yum! Brands, the conglomerate that owns KFC, Pizza Hut, and Taco Bell, soaks us for $648 million to underwrite its poverty pay. Subway burrows into us for $436 million. Burger King, taps us for $356 million, little sweet Wendy’s grabs more than a quarter-billion bucks from us, and Dunkin’ Donuts dips into our pockets for $274 million.

And look here — it’s Domino’s pizza, whose extremist right-wing owner says he hates government spending. But he’s picking taxpayers’ pockets to the tune of $126 million to subsidize his “free” enterprise.

These corporate powers piously preach about the “magic” of the marketplace, but as these facts reveal, magicians don’t do magic. They perform illusions.