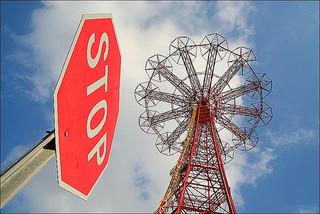 Riding on the Wrong Track

I opened my paper the other morning, brimming with the hope and optimism that spring (and spring training) always excites in me, and these are the stories I saw:

– A killer in Toulouse, France had attacked a Jewish school, murdering a rabbi and three young children.

– A dozen police officers in Mexico were ambushed and killed while investigating the beheading of 10 people.

– Florida police claimed they couldn’t arrest the self-appointed neighborhood watcher who had shot unarmed black teen Trayvon Martin to death because of the state’s “stand your ground” law, which apparently allows people to shoot other people pretty much whenever they feel like it.

Do you sense a trend here, like maybe the world has gone completely bonkers? 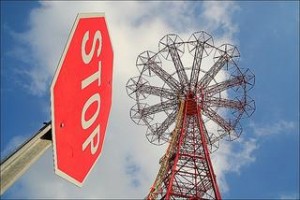 I can feel some sympathy with those people who keep telling pollsters that they think the country isn’t on the right track. What I don’t understand is why so many of them keep trying to make things worse.

For example, Republicans keep complaining that President Obama is getting our troops out of Afghanistan too fast. They say they’d stay the course and listen to “our generals on the ground” in forging policy.

Generals on the ground never want to admit that they’ve lost a war. Never. Just the other day Marine Corps General John Allen, our commander in Afghanistan, told Congress we could complete our mission there, whatever that is.

If that mission is to “pacify” Afghanistan, we can’t. No foreigner has ever done that, and I’m willing to bet no one ever will. Our mission right now is to get the hell out.

Had we elected John McCain in 2008, we’d not only be in Afghanistan, we’d be in Iran.

Speaking of Republicans, it begins to look as though Mitt Romney — at long last and for real — is going to be the Republican nominee for president.

The good news is that he’s the best Republican available.

The bad news is that he’s the best Republican available.

Really? Since when has a businessman turned out to be a successful president of the United States? Herbert Hoover? Republicans spent 50 years living down his legacy.

What’s he going to do as president, buy Canada, fire all the government workers there, and sell it for a profit to Germany? That’s the kind of businessman he was.

Unlike his Republican colleagues, Romney’s problem isn’t that he has so many enemies. It’s that his friends can’t stand him. If you see people walking into the voting booth in the fall holding their noses, you’ll know they’re voting for Romney.

Then there’s Rick Santorum, who sounds as though he’s running to be president of Vatican West, and Newt Gingrich, who thinks he’s uniquely qualified to beat Obama, even though he ran behind Ron Paul in Illinois.

Stop the world; I want to get off.