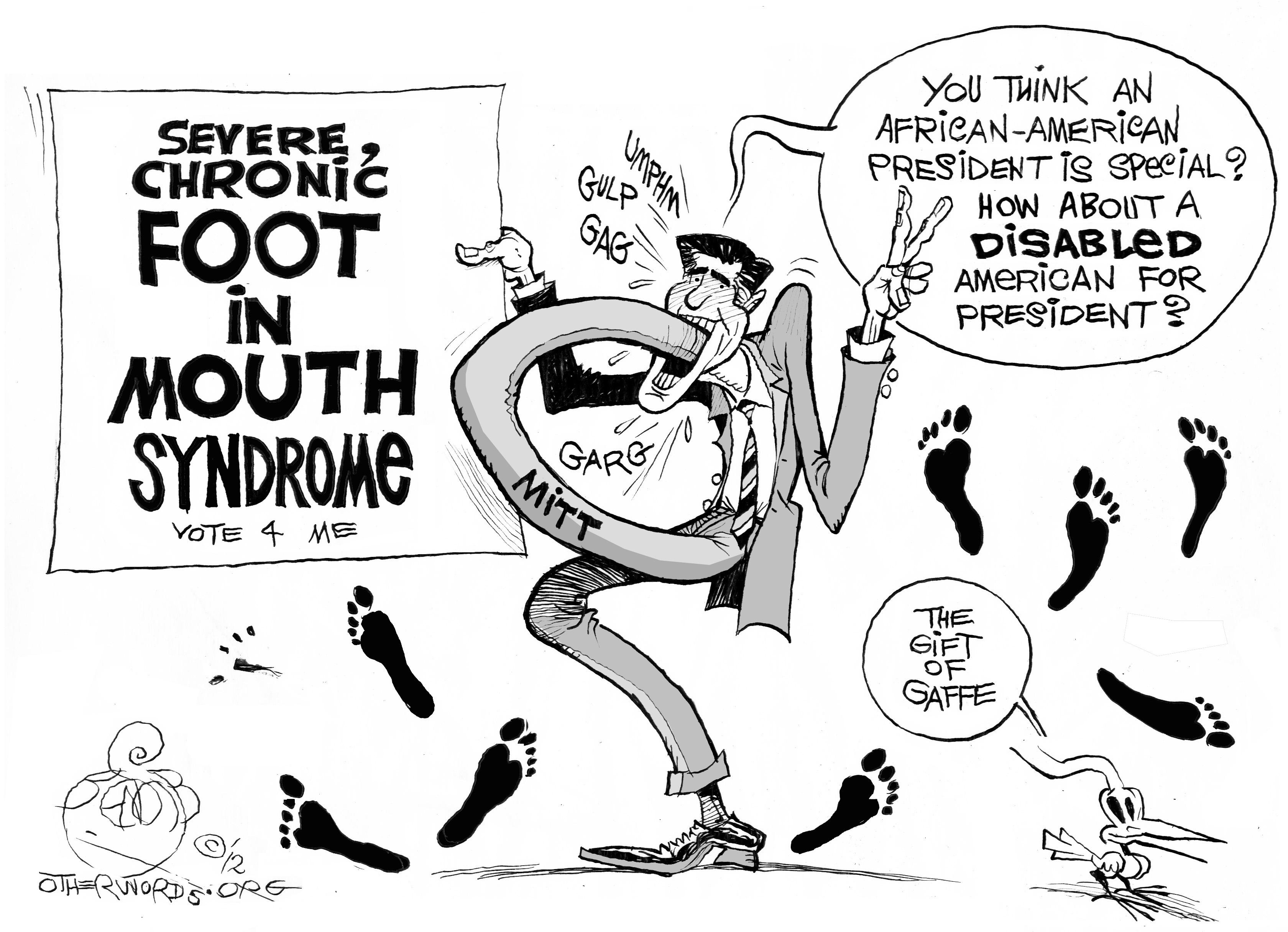 Year of the Gaffe

Maybe you think the presidential election will come down to the issues. That would mean looking at how Barack Obama and Mitt Romney differ on important matters — or, in many cases, how they don’t. Or perhaps the election might be all about money, and the shadowy Super PACs that will bombard us with TV advertising.

But often the campaign dwells on something else: gaffes.

What’s a “gaffe”? One of those unscripted or “off-message” comments that, according to big-media pundits, are deeply revealing.

Here’s the bad news: The presidential campaign has barely even started. And the worse news: The media is in full-on gaffe mode.

The gaffe season was in full swing a few weeks back when Barack Obama said at a press conference that the private sector is “doing fine.” He was comparing the employment picture among private companies to that of the public sector — government jobs. I suspect even the White House would agree this was not well put. But it happened to be an accurate observation. The number of private-sector jobs has rebounded to about what it was when Obama took office, while the number of government jobs has declined by more than 600,000. Meanwhile, corporate profit margins are at record-high levels.

Romney’s campaign used this supposed gaffe to illustrate how Obama “doesn’t understand business,” which is its main line of attack. Those few ill-chosen words would form the basis for many thousands of words that would attempt to tell us how this comment would affect, or even define, the presidential campaign season.

And just think: We’ve got at least four more months of this to come. Not too long after Obama’s comments about the private sector’s wellbeing came a “mini-gaffe,” where reporters spent the better part of an afternoon suggesting that Mitt Romney was dazzled by the sandwich kiosks at a Wawa convenience store. 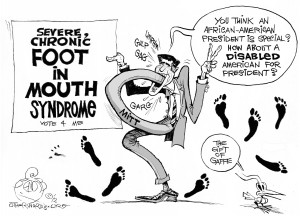 Mitt’s Gift of Gaffe, an OtherWords cartoon by Khalil Bendib.

That sandwich flap followed a cascade of out-of-touch comments from Romney that were so absurd that Mad Magazine created a quiz to see if readers could distinguish the ”GOP candidate’s gaffes from zany things uttered by Mr. Burns on The Simpsons. “I like being able to fire people who provide personal services to me”? Romney. “I’m really enjoying this so-called ‘iced cream'”? The filthy-rich owner of the Springfield Nuclear Power Plant on the TV show. Mitt Romney has, however, had trouble identifying chocolate doughnuts and treating locally revered cookies in Pennsylvania with the appropriate degree of reverence.

One of the strangest things about all of this “gaffe” business is that it’s so transparently phony. A campaign seizes upon a minor event. It makes a quick Web video. And reporters spend days, if not weeks, pondering the meaning of it all.

Of course, the same journalists could do something else entirely. They could cover the issues that actually matter. Or maybe, believe it or not, fact-check the candidates’ claims and counter-claims. Without journalists playing that role, campaigns are developing a monopoly over defining which issues should matter to voters.

Too many campaign reporters are behaving like they’re on the weather beat. They’re telling folks what happened that day and maybe what’s likely to happen tomorrow. But that’s not really the way it should work. Journalists don’t just observe the action. They are active participants in the campaign, making choices about what to treat as important news and what to ignore.

Waiting around for candidates or spokespeople to misspeak — is this any way to run a democracy? Of course not. But so long as big media sticks to the campaign “narratives” and wastes time wondering what the latest poll numbers might mean, it makes it that much harder to fix what is so obviously broken.

Peter Hart is the activism director of Fairness & Accuracy in Reporting. www.fair.org
Distributed via OtherWords (OtherWords.org)