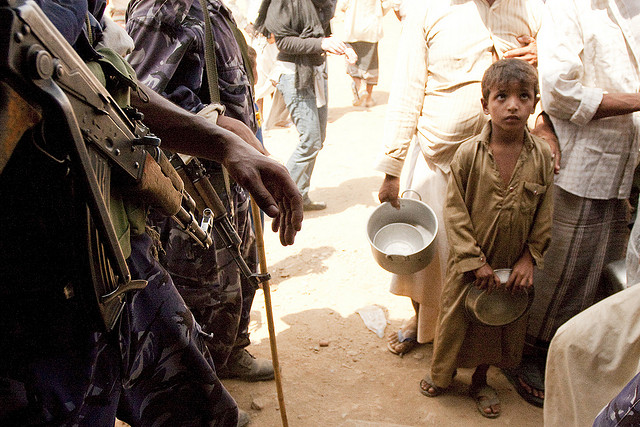 Yemen Is Starving, and We’re Partly to Blame

A Saudi-led war supported by Washington has sparked a devastating humanitarian crisis.
By Chris Toensing | July 1, 2015

Twenty million people in Yemen, the poorest country in the Arab world, are at risk of dying from hunger or thirst. That’s 80 percent of the country’s population, which according to UN agencies badly needs emergency supplies of food and water, along with fuel and medicine.

This almost unimaginable crisis sounds like something out of a disaster movie. But the cause isn’t an earthquake or a tsunami.

The main reason for all this suffering is months of merciless bombardment and blockade led by the richest Arab countries — Saudi Arabia and its neighboring petro-princedoms — and backed by the United States. Washington’s providing the attackers with technical assistance, intelligence, and top-shelf armaments.

The countries bombing Yemen are targeting a rebel group they claim is a proxy for Iran. The evidence for that is very thin.

In fact, the conflict in Yemen is rooted in internal disputes. Try to stay with me…

In 2011, a nationwide uprising akin to those in Tunisia and Egypt deposed the country’s autocratic leader, Ali Abdullah Saleh. There was no democratic election before his successor, the Saudi- and U.S.-backed Abd Rabbuh Mansur Hadi, took over — he ran unopposed. And there was no relief from the terrible poverty, unemployment, and government corruption that brought about the popular revolt. 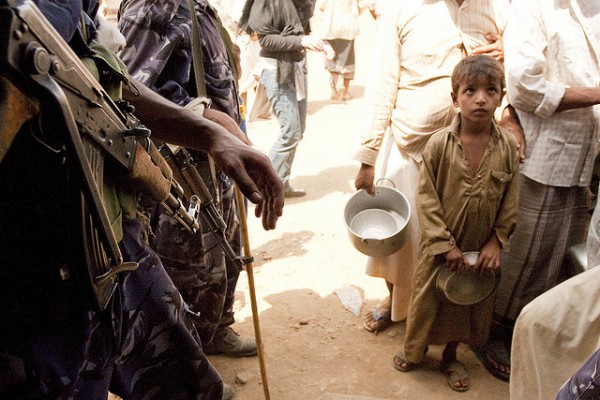 So a few months ago, a reformist movement and militia called the Houthis — which had launched a handful of rebellions against Saleh in the past — took advantage of widespread discontent to conquer the capital, Sanaa. Hadi fled into exile, and the Saudis started bombing shortly thereafter.

Since then, local militias in central and southern Yemen have fiercely resisted the Houthis and army units still loyal to Saleh, who is now allied with his former foes. Meanwhile, a local franchise of al-Qaeda is fighting everybody.

In short, it’s terribly complicated, and the bombs aren’t helping.

The Yemenis caught in this crossfire were already thirsty and hungry before the war — unlike their Saudi neighbors, they don’t have a lucrative oil supply. Now, with Yemen’s borders closed, its airports shut down, and Arab navies enforcing an embargo at sea, the situation is breathtaking in its desperation.

Saudi Arabia and its friends, including the United States, support Hadi. Yet they have no discernible plan for winning beyond reducing Yemen to rubble and besieging civilians in the hope of securing the Houthis’ surrender.

The Obama administration probably doesn’t believe the Saudis’ nonsense about the Houthis and Iran, but it’s shown no interest in stopping the war.

In fact, the United States has even announced a full suspension of aid to Yemen for a year, undercutting its occasional murmurs of humanitarian concern. By endorsing this Saudi-led shooting match, Washington may hope to calm the Saudis’ nerves about the ongoing nuclear talks with Iran, which Saudi Arabia opposes.

Is that what it’s come to, soothing a bully’s nerves just because it pumps a lot of oil?

Instead, the Obama administration should withdraw its support for the bombing, lift the blockade, and broker a power-sharing agreement between Yemen’s competing factions. For the people of Yemen, it’s beyond urgent.

Chris Toensing is editor of Middle East Report, published by the Middle East Research and Information Project in Washington, DC.
Distributed by OtherWords.org.