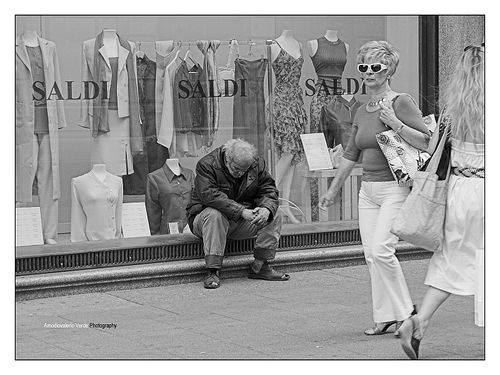 A millionaire's attempt to explain why he's better than you falls flat.
By Marjorie E. Wood | October 22, 2014

Tiffany Beroid, a mother and Wal-Mart employee in Laurel, Maryland, was forced to drop out of college because of her employer’s low wages and erratic scheduling practices.

When she spoke out about the problems she faced, Wal-Mart fired her.

Since then, Beroid has shared her story with Congress and anyone who will listen. In July, she told lawmakers that Wal-Mart workers “shouldn’t face problems like this working at a company that brings in $16 billion in profits a year.”

Not according to Steve Siebold— a multi-millionaire and author of the book How Rich People Think. In a recent viral article with the self-evident headline What the Middle Class Doesn’t Understand About Rich People, Siebold suggests that working Americans like Beroid should stop making “empty statements” about their billionaire employers and instead take a lesson from them.

So what are you failing to understand about the rich? Mostly that they’re better than you.

Siebold insists that billionaires like Wal-Mart founder Sam Walton’s affluent heirs deserve their wealth because they think, feel, and act differently from ordinary people. If working Americans could “really understand the mindset of the richest people,” he says, “they would be among the top earners as well.”

Unlike the rest of us, according to Siebold, rich people believe in themselves, focus on the future, value their freedom, and are comfortable with uncertainty — all traits that the masses just can’t fathom.

Tiffany Beroid doesn’t need any lectures about believing in herself. She enrolled in college to become a nurse while raising a toddler and holding down a job at Wal-Mart. That takes a lot of self-confidence.

“OK,” Siebold might say, “but she probably doesn’t dream about the future.”

Actually, the future is what guides Beroid’s decisions. As she put it, “I thought that if I worked hard, I could give my family a stable home and lift us out of poverty.”

But does she really understand the value of freedom? According to Siebold, after all, only “rich people can afford to stand up and fight oppression.”

In fact, since losing her job at Wal-Mart, Beroid has been speaking out against worker oppression and taking bold actions to stop it.

At this point, Siebold might take a deep breath and say, “OK, but there’s no way Beroid could understand operating in a state of constant uncertainty. That trait truly distinguishes the rich from everyone else.”

He’d better try again. No one understands uncertainty more than a Wal-Mart employee like Beroid who found herself scheduled to work 40 hours one week and 15 hours the next. Thanks to unpredictable scheduling practices that can make it impossible to budget time or money, many wage workers’ personal lives and economic livelihoods are in constant upheaval.

For his next book, maybe Siebold should just skip the rich. He could interview Wal-Mart employees instead.