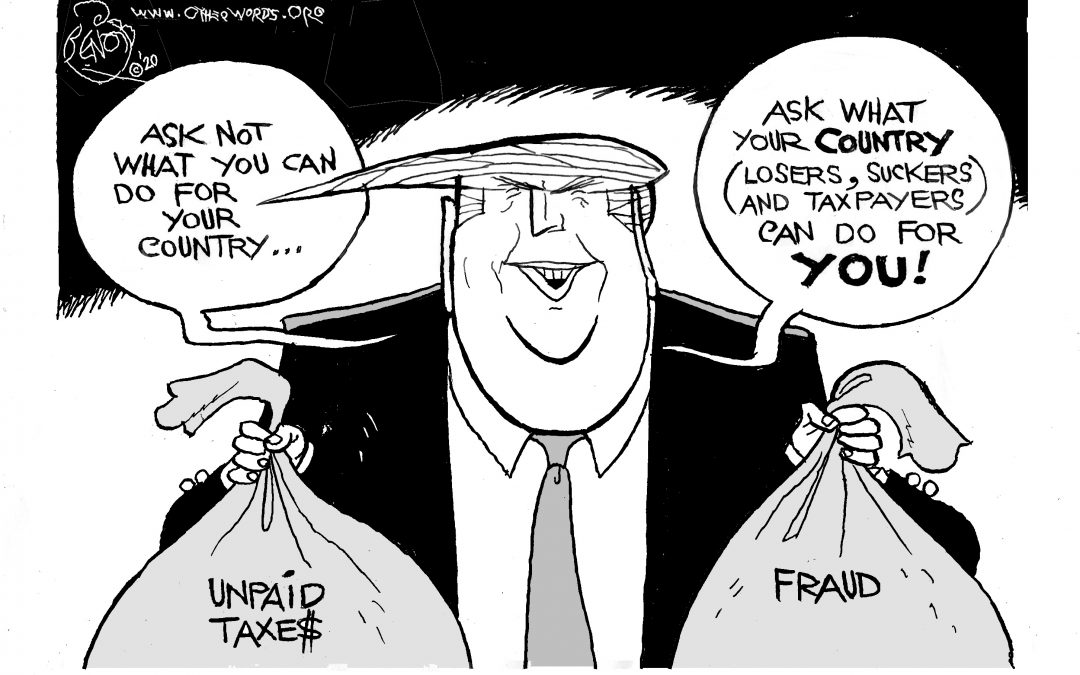 There are two tax systems in America: one for you and me, and one for the wealthiest 0.1 percent.
By Chuck Collins | September 30, 2020

My daughter, a librarian in Tucson, paid more taxes in 2017 than Donald Trump. So did my neighbor Rita, a teacher, and her son Tony, who stocks grocery shelves in Leland, Michigan

I also pay more in taxes than the president of the United States. And, probably, so do you.

We now understand why Trump was the first presidential candidate since the 1970s not to divulge his tax returns.

The average middle class household paid approximately three times as much in federal taxes as Trump did in 2017, an average of $2,200 based on an income of roughly $60,000. Any individual earning over $25,000 most likely paid more than the president.

It’s not that Trump wasn’t paying taxes at all. In 2017, Trump paid $156,824 in taxes in the Philippines and $145,500 in India. He just wasn’t paying them to support veterans, build roads, or protect seniors in this country.

The other secret Trump doesn’t want you to know is that his image as a wealthy successful business mogul is a mirage.

Over the decades, Trump personally lobbied Forbes Magazine to report that he was wealthier than he really is. Two decades of tax returns, however, reveal he is a man in deep financial doo-doo. He may even owe more than he owns.

On top of these losses, Trump deducts tens of millions in lavish personal living expenses — such as $70,000 in hair styling, consulting fees to his children, and mansion retreats — to reduce his tax obligations.

Only someone with Trump’s army of tax attorneys and wealth managers could pull off these loopholes. Trump’s assets are spread over 500 different corporate shells, enabling limitless shifting and gaming of income and taxes.

Most of us get our incomes from paychecks and government agencies that know exactly how much we are paid and often withhold our taxes before we even see the money.

Wealthy people with incomes over $2 million and assets over $20 million get most of their income from investments, ownership of assets, and businesses. There are endless games they can play to manipulate their income. And they can afford to hire accountants and tax lawyers to maneuver their taxes downward.

If you lose money, you grow poorer. But when the super-rich create paper losses to offset their taxes, they’re still rich. And like Trump, they aren’t sacrificing anything in terms of their cushy standard of living.

These tax shenanigans are all the more unseemly in the face of a pandemic that’s destroyed the wealth, health, and livelihoods of millions. Tens of millions of families have lost jobs, savings, home equity, and any other economic security they may have had.

They will not be “carrying over” these losses into future years and virtually eliminating their taxes for a decade, as Trump did.

Instead, they’ll pay income taxes on unemployment insurance, stimulus checks, and any paycheck they’ve been able to eke out.  There will be no deductions for haircuts or consulting contracts for their children.

If there’s a silver lining, it’s that Trump’s tax manipulations reveal where the weak spots are in the current system. Congress should restore fairness and integrity to a tax system that has been pillaged by the super-rich.

Chuck Collins directs the Program on Inequality at the Institute for Policy Studies.