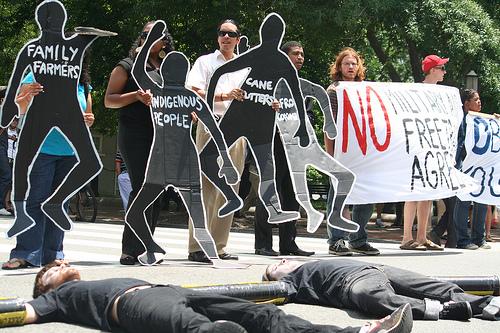 Your Labor Rights or Your Life

A hostile labor environment in a country like Colombia, connected through a trade agreement to the U.S., has repercussions for workers at home as well.
By Jessye Weinstein | July 30, 2012

When President Barack Obama announced in April that the U.S.-Colombia Free Trade Agreement was finally going into effect, he assured the public that “[t]his agreement is a win for both our countries. It’s a win for our workers…because of the protections it has.”

However, this rhetoric ignores Colombia’s rampant labor abuses. In fact, a recent survey of union rights violations around the world ranked Colombia as the deadliest country in the world to exercise labor rights.

In recognition of Colombia’s grave history of labor rights abuses, Obama and Colombian President Juan Manuel Santos signed a Labor Action Plan last year that outlined steps to improve labor conditions in Colombia before the trade agreement could go into effect. Despite these promises, backed by millions in assistance from the U.S. Department of Labor, the free trade agreement between the two countries went into effect this May without having meaningfully complied with that plan. 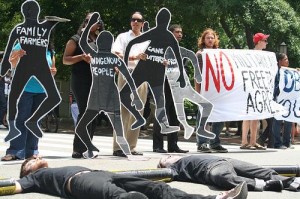 During the week the agreement was implemented, four labor union leaders, all working in the five prioritized industries in the Labor Action Plan, received death threats. In fact, Colombian union organizers have received over 500 death threats — and 29 have been assassinated — since the Labor Action Plan went into effect in April 2011. Furthermore, cases of violence against trade unionists are almost never prosecuted in Colombia. Despite Obama’s promises, exercising labor rights still means risking your life in Colombia.

The ability of Colombian workers to unionize and collectively bargain is challenged not only by direct threats against workers’ lives, but also by structures of intermediation in the hiring process. Indirect forms of employment that deny workers their rights as defined by Colombian law aren’t the exception, but rather the rule. Currently, only 4 million of Colombia’s 18 million workers are estimated to have formal labor contracts. When workers challenge this situation, they are often met with violent repression.

This past April, the Secretary General and founder of the national sugarcane-cutters union, Daniel Aguirre, was killed in front of his wife and two children. He had led a campaign to secure direct work contracts for those in the sugar industry.

Only 3.5 percent of Colombian workers are able to unionize due to violence and third-party contracting that denies workers their basic rights.

The freedom to organize without fear of reprisal is fundamental to the creation of a fair working environment. A fair and humane trade agreement cannot exist in a climate where union leaders are under threat and extrajudicial killings are conducted with widespread impunity. A hostile labor environment in a country whose economy is connected through a trade deal to the United States has repercussions for workers at home as well. U.S. labor leaders recognize that this agreement impacts the fundamental rights, working conditions, and standards of living for working families in both nations.

Trade accords prioritize the interests of investors and big companies, opening up economies to allow corporations to exploit whatever labor conditions will maximize their profits. As executives recognize these opportunities and move jobs overseas, unions are scapegoated for supposedly infringing on corporate profits and driving employment to countries where labor is cheap and flexible. Instead, we must recognize the role unions played in bringing about a prosperous American middle class.

To safeguard labor rights in both nations, Americans must advocate for the right of Colombian workers to have direct contracts with their employers. In this way, we can take President Obama’s empty promise to protect workers into our own hands.