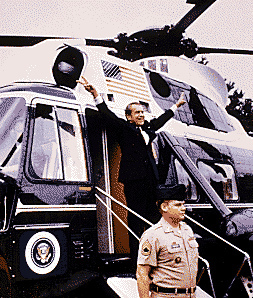 Many of OtherWords columnist Donald Kaul’s most memorable and insightful commentaries skewered the Watergate scandal and its architects.

Kaul, a two-time Pulitzer Prize finalist, remains on medical leave after writing a weekly column for this editorial service for most of the past 14 years. He spent the bulk of his long career writing syndicated columns for the Des Moines Register. He also had a stint at the Cedar Rapids Gazette.

We’re sharing these excerpts from Kaul’s reflections on President Richard Nixon’s resignation to mark the 40th anniversary of that event. They’re in chronological order and linked to complete columns scattered around the Internet.

It was pure Nixon, his self-pity, the calm, detached air; the profound cynicism and the quick thrust to the opponent’s mid-section with a sharp knife. That little anecdote, along the look and the smile, told more about Nixon’s contempt for the honor of Kissinger than he could have revealed in a chapter of his book. It was beautiful. No one does it better.

If there was a quality that can be said to have been the hallmark of Richard Nixon’s presidency, it was his absolute lack of respect of law. In his dealings with Congress, in his conduct of the war in Vietnam, even in the computation of his income tax, he tried to get way with everything he could.

Watergate was “stupid,” the cover-up “stupidity at its very highest,” and the tapes “should have been destroyed.” Mistakes, mistakes; just a series of stupid mistakes. Could have happened to anyone.

Nixon Clears It All Up Reagan Innocent — Shifty Told Us So
December 15, 1986

The hunt is over. President Reagan is innocent; he didn’t know what was going on. How do I know? Richard Nixon told me so.

Nixon is perhaps the most consistent political analyst we have. No matter how big a jam an American president is in, no matter what the circumstances, his response is the same: The president is not a crook. It’s nice to have a theme to one’s life.

The issue in Watergate was one of abuse of power. We were attempting to find out whether the president of the United States had tried to subvert our electoral process and our system of justice. As it turned out, he had.

The Trivialization of the Presidency: Nixon Malevolent, But Had Vision
March 30, 1990

(Nixon) combined a penetrating intelligence with a malevolent spirit in a way that filled the mind. He was a villain, yes, but a big-time villain.

We are about to be reminded of his larger-than-life quality by publication of yet another Nixon book — In the Arena (Simon & Schuster). Time has just printed an excerpt, and I am happy to report it is vintage Nixon.

At one moment, he is Tricky Dick — paranoid, whining, self-serving — at another he is the statesman who went to China, far-seeing and shrewd.

He is at his best, that is to say his most Nixonish, when he speaks of Watergate and his responsibility for it. He treats the break-in at the Democratic headquarters and the subsequent conspiracy to cover it up as a parent might a raucous party thrown by his teen-age children while he was away on a trip.