Shutting the Whole Thing Down, an OtherWords cartoon by Khalil Bendib

It’s All Their Fault

The shutdown as well as the looming debt ceiling crisis is entirely a Republican Party production.
By Donald Kaul | October 2, 2013

Everyone pretty much agrees that what’s going on in Washington right now ranks up there with the dumbest, most destructive episodes in our history.

We are a great and powerful country, on the cusp of achieving that “Shining City upon a Hill” status that Puritan leader John Winthrop talked about nearly 400 years ago.

I mean it. We have the ability to have it all: peace, prosperity, health, happiness. 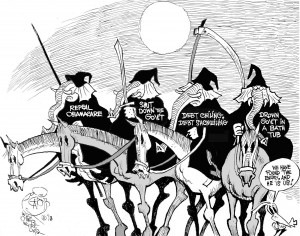 Shutting the Whole Thing Down, an OtherWords cartoon by Khalil Bendib

Instead we see our government locked in a series of petty, ugly squabbles that do nothing but make things worse. It reminds you of those stories about lottery winners who, given an instant fortune, immediately squander it and wind up broke.One of the popular misconceptions about this sad state of affairs is that it’s equally the fault of all concerned — Democrats as well as Republicans.

Polls taken beforehand indicate that only about 45 percent of Americans would blame the Republicans for the government shutdown. A third think the Democrats are at fault. And an additional 13 percent say both are to blame.

No. Not true. Wrong.

This mess — the shutdown as well as the looming debt ceiling crisis — is entirely a Republican Party production. The Republicans created it out of thin air, motivated by a fear of the tea party and an odd obsession with standing in the way of an expansion of health care for millions of Americans who are going without it.

They’ve called the Affordable Care Act a train wreck, a disaster, and another Pearl Harbor.

What utter nonsense. It is instead a law passed by Congress and signed by the president of the United States, who then won re-election by five million votes. The Supreme Court has ruled it Constitutional.

What more do you want, the Good Housekeeping Seal of Approval?

Republicans say that polls show that a slim majority of Americans don’t support the law. What they don’t say is that a full quarter of those people favor a further extension of the law, not repeal. The opposition to it is largely the result of the constant drumfire of lies, exaggerations, and propaganda that Republicans have sent out over the past two years.

The law isn’t perfect — no one claims it is — but the message from the voters is clear: Don’t kill it, make it better.

Another general misconception is that the national debt is our biggest problem and the budget must be cut to shave it. No and no.

You can’t cut your way out of a recession. That’s what Europe is trying to do, with dismal results. The time to cut spending is when things are going good. Jobs or the lack of them is the biggest problem right now.

Yet another misconception is that the fallout from a failure to raise the debt limit would not be that big a deal. It would be.

Shutting down the government is a bad idea but somehow we’ll stagger through it out to the other side. If we default on our debts, however, it would be a catastrophe that would bring our economy to its knees and have ramifications that stretch far into the future.

You don’t mess with something like that. You don’t try to make it into a bargaining chip. You spent the money and now it’s time pay for what you bought. If that demands a higher level of debt, so be it.

President Barack Obama is right to refuse to even consider giving in to the threats of the House Republicans. If he were to bargain on the debt ceiling, he would leave himself and the nation open to continued blackmail.

What I really don’t understand is why normal, sensible Republicans — conservative but reasonable — are allowing their party to be taken over by a gang of lame-brained thugs.