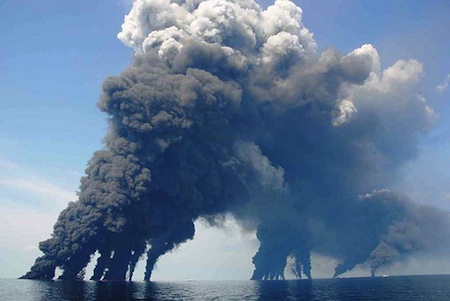 In this April 5, 2006 column, Kaul described one of the ways the government pads the oil industry's bottom line.
By Donald Kaul | December 18, 2013

I always thought the best job in the world was being Dick Cheney’s mea culpa coach. The pay wouldn’t be much but, in terms of not having much to do, it ranks up there with being a Christmas shopper for Osama bin Laden.

Now I have discovered an even better job. It’s easier and a lot more lucrative. Next time around, I want to be an oil company executive.

They’ve made it so easy for oil executives to make money these days that even George W. Bush, who was a failure at it 20 years ago, could make a fortune in the industry now. It’s become a virtually foolproof, no-risk enterprise. It’s not merely that the government will fight a war on your behalf at the drop of an oil rig — governments have always done that — they now actually bribe you to make money.

That’s literally true. I found out about it in the New York Times last week.

It seems that Congress, with the aid and support of the president, is giving oil companies tax incentives to drill for oil in the Gulf of Mexico. And “incentives” is a polite way to put it. It’s more of a giveaway of taxpayer-owned rights to offshore oil.

I know what you’re going to say: Why in the world, with oil at $50-$60 a barrel, would you have to give oil companies incentives to drill for it? There’s no good answer to that question. The bad answer is as follows:

Back in 1995 the outlook wasn’t bright for Gulf oil producers. Crude oil was selling for about $16 a barrel and small oil companies were flaming out. Drilling investment was going overseas.

Enter Congress and the Clinton administration (much underappreciated as a willing tool of the ruling classes). They passed a bill that allowed companies to forego the standard 12 percent government royalty on oil and natural gas found in the Gulf. It was supposed to be for a limited amount of oil and only if oil was going for less than $34 a barrel. Ha!

The story now is that some Clintonistas in the Interior Department “forgot” to include the limits in some of the oil contracts they were writing. (I wonder how those guys are doing now. Pretty well, I’d bet.) Which meant that, on those leases, no royalties had to be paid no matter what the price of oil.

Then a Louisiana court (always a friendly venue for oil companies) removed restrictions on how much free oil and gas a company can produce.

Now Kerr-McGee, a big Gulf oil producer, is suing to extend the incentives even further.

The upshot of it all is that this serial capitulation to oil companies is going to cost the American taxpayer between $7 billion and $28 billion over the next five years, depending on how the suits go. And where is the money going? Into the already fat wallets of oil producers. And what are the American people getting? The shaft.

There’s a belated effort to do something about this. Rep. Edward Markey, a Massachusetts Democrat, has introduced legislation that would pressure companies to pay full royalties when energy prices are high, no matter what their leases say. It has little chance of passing.

As Gale Norton, Bush’s former Interior Secretary and chief wilderness exterminator, said: “These are binding contracts that the government signed with companies. I don’t think we can change them just because we don’t like them.”

Norton recently left government to pursue other career options. Wanna bet she winds up as an energy company executive?

OtherWords columnist Donald Kaul lives in Ann Arbor, Michigan. This is the second in an occasional series of his earlier commentaries. OtherWords.org