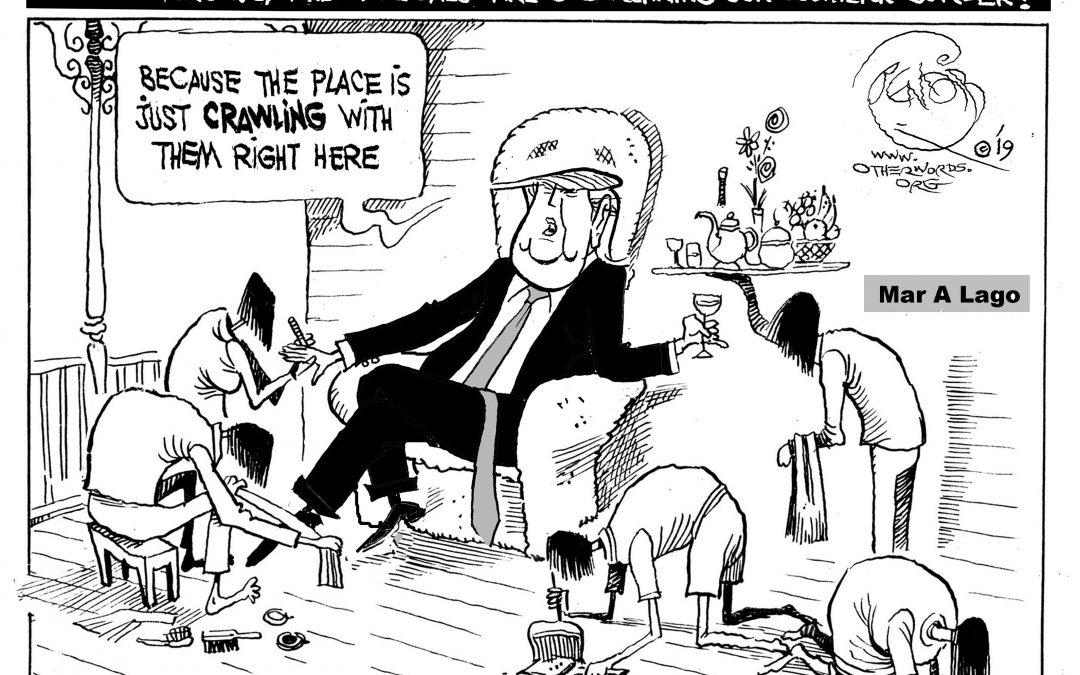 President Trump has declared a "National Emergency" in a bid to free up funds to build a border wall. Then he went to Mar-a-Lago.
By Peter Certo | February 20, 2019

President Trump has declared a “National Emergency” in a bid to free up funds to build a border wall. (Immediately after declaring it, he decamped for his Florida resort — where, cartoonist Khalil Bendib expects, he was waited on by undocumented workers.)

This week in OtherWords, Sara Schulz looks at her small town in Michigan and concludes immigrants aren’t to blame for people’s anxiety there — greedy corporations are. And Jill Richardson offers a personal story about the futility of building walls to “keep drugs out” when we do nothing to treat the root causes of addiction.

Also this week, Virginia resident Tracey L. Rogers looks at the scandals roiling her state and proposes a standard for when politicians need to step down that could apply anywhere.

Finally, veteran Mike Ferner argues that politicians should spend a week treating wounded soldiers before ever voting on war funding. And author James Campbell outlines the spiritual stakes for all Americans in the battle over oil drilling in Alaska’s pristine protected wilderness.

Immigrants Aren’t the Emergency — Unchecked Capitalism Is | Sarah Schulz
Communities like mine, in small-town Michigan, are told to blame immigrants when greedy corporations hurt us. We don’t buy it.

Take It From Me: Addiction Doesn’t Start at the Border | Jill Richardson
For decades the U.S. has tried to stop drug traffic and made the problem worse. We should treat the root causes of addiction instead.

We Need a New Standard for When Politicians Should Step Down | Tracey L. Rogers
If you can’t humble yourself to consider the feelings of those you’ve harmed, you can’t remain in office.

What War Films Never Show You | Mike Ferner
I treated wounded GIs from Vietnam. I saw carnage that seldom makes its way into harrowing war stories like “They Shall Not Grow Old.”

In the Arctic Refuge, a Life Force Hangs in the Balance | James Campbell
Indigenous Alaskans consider the Arctic National Wildlife Refuge sacred land. So should other Americans.

Freedom for All Begins With Freedom for the Most Marginalized | Tracey L. Rogers
During Black History Month, we celebrate the legacies of those who learned what it truly means to be free — by being denied freedom for centuries.

Trump Said He’d Protect Families — Then Deported My Husband | Cindy Garcia
The president uses racism and fear — and breaks up families like mine — to keep people divided while his billionaire buddies get tax cuts.

If You Hate Campaign Season, Blame Money in Politics | Sarah Anderson
The fact that 2020 candidates are announcing now is a testament to the huge expense of elections. Can a new law change that?