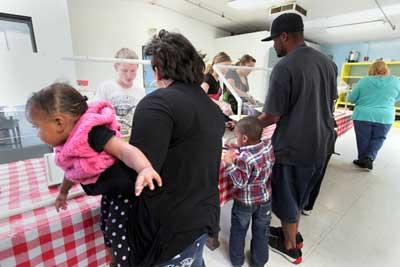 This blogpost originally appeared on Truthout. 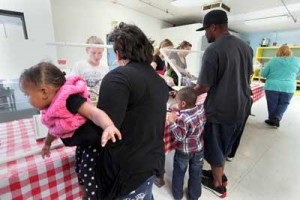 According to Census Bureau figures released today, 15 percent of the US population lives in poverty. In 2011, more than 46 million Americans lived below a poverty line that was set more than four decades ago, in 1969.

The poverty rate for children remains more than 20 percent for the third year in a row. More than one-third of black children and Hispanic children live in poverty.

In the words of Rep. Mike Honda (D-California), co-chair of the Congressional Out-of-Poverty Caucus, these figures are “a stark reminder that, although we are the wealthiest nation the world has ever known, far too many children are going to bed hungry.”

In fact, the USDA reports that more than 16 million American children are “food insecure.”

Median household income (adjusted for inflation) was down an additional 1.5 percent from the already-low levels of 2010. Median income is now 8.9 percent lower than it was in 1999.

All this bad news comes against a backdrop of extraordinarily low employment rates. According to the Bureau of Labor Statistics, just over 58 percent of the adult population has any kind of job at all (full or part time), the lowest figure in 30 years.

Only 64 percent of adult men have a job of any kind, the lowest figure ever.

The poverty line we use today was officially set on August 29, 1969. It represented a 1969 consensus of the basic minimum standard of living for American families in 1969. Other than adjusting for inflation, it has not been updated since.

In the technical discussions that preceded the official determination of the poverty line, experts considered a methodology that “would have resulted in poverty thresholds that were 25 percent to 30 percent higher than the existing thresholds,” according to research published in the Social Security Bulletin.

In essence, 15 percent of Americans today live in what would have been considered poverty in 1969, more than 40 years ago. Had our standards gone up over the past 43 years, even more Americans would now be identified as poor.

And state anti-poverty programs around the country are facing severe budget cuts.

According to figures from the Bureau of Economic Analysis, America’s total economic output per person is now more than twice as high as it was in 1969 (adjusted for inflation).

With twice the resources, today’s America is much better placed to end poverty than was the America of 43 years ago.

Today’s Census Bureau report offers little cause for hope. After 43 years with no progress, poverty is now endemic in America. But we do have the financial means to reverse it, should we ever garner the political will.